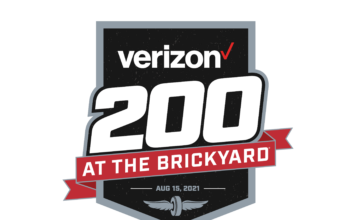 ● Sunday’s Verizon 200 at the Brickyard marks another first for the NASCAR Cup Series as the top drivers in stock car racing are set to compete on the road course at the famed Indianapolis Motor Speedway for the first time. But for a small town 85 miles to the south, it symbolizes a homecoming for its local hero. Upon entering Mitchell, Indiana, a sign welcomes visitors to the hometown of Cup Series driver Chase Briscoe. There’s even a billboard that features the No. 14 HighPoint.com/Ford Performance Racing School Mustang for Stewart-Haas Racing (SHR) and a message of encouragement for the hometown star. It’s clear who the residents of Mitchell cheer for during Cup Series races, but the town has long supported the racing endeavors of Briscoe, his father Kevin, an accomplished dirt racer, and his grandfather Richard, a renowned team owner. Indianapolis may not be located in Lawrence County, but it feels like home for Briscoe, and it just so happens to be one of the most well-known venues in all of sports.

● Briscoe returns to Indiana already a winner at the Brickyard. Last year, when the NASCAR Xfinity Series competed on the Indianapolis road course, he fulfilled a childhood dream by winning the Brickyard 150 on the 2.439-mile, 14-turn layout. Briscoe started 12th in the 38-car field and took the lead for the first time on lap 24, eventually leading five times for a race-high 30 laps. But leading the final two laps took considerable effort, as Briscoe had to battle road-course ace AJ Allmendinger in the final seven tours around the track. Allmendinger took the lead from Briscoe on lap 59 and sent him to third after the SHR pilot overdrove a corner. But Briscoe buckled down and set his sights on regaining the lead, reasserting his position at the front of the field with a powerful drive past second-place Austin Cindric and leader Allmendinger on the penultimate lap. Briscoe wheeled his Ford Mustang around the serpentine layout inside the hallowed grounds of the Brickyard, pulling out a 1.717-second margin of victory over runner-up Justin Haley. It was Briscoe’s fifth win of an eventual nine-win season.

● The win made Briscoe the first driver to do so on the Indianapolis road course in a stock car in a race that saw Hoosiers finish 1-2 at the Brickyard for the first time in history. Emulating his childhood hero and fellow Indiana native Tony Stewart, Briscoe climbed the fence with his crew before kneeling down to kiss the bricks, a tradition that had long been admired by the young racer from Indiana. Now, Briscoe will have a chance to repeat that process, this time as the driver of the No. 14 Ford Mustang once driven by Stewart.

● Since last year’s win at the Brickyard, Briscoe has continued to show his strength on road courses. In five road-course races this year, the Cup Series rookie has earned three top-10 finishes with a best result of sixth earned twice – first at Circuit of the Americas in Austin, Texas, and at Road America in Elkhart Lake, Wisconsin. In the series’ most recent road-course event at Watkins Glen (N.Y.) International last weekend, Briscoe challenged for the lead early in the second stage and ran solidly in the top-five before the team switched to a fuel-saving strategy late in the race. The conservative move cost the team a chance to compete for the win, but the No. 14 Ford Mustang was strong enough to hang on for a ninth-place finish.

● Briscoe’s ability to earn top-finishes on road courses should come as no surprise. The 26-year-old driver’s first Xfinity Series victory was earned on the Charlotte (N.C.) Motor Speedway Roval in 2018. In post-race interviews, the dirt racer from Southern Indiana explained how he tapped into his experience on his hometown bullrings to capture the win by stating, “it drove like a dirt track instead of a road course, and it felt like I was in a sprint car. I just tried to make sure the rear tires never spun. I had to give up a little time coming off the corner, but I’d make it back up down the straightaway, and that’s why I was always better at the end of the run.”

● That dirt-track experience is still put to good use as Briscoe continues his first season in the Cup Series. While Sunday is reserved for making left- and right-handed turns around the Indianapolis road course, Friday night is for turning laps around the local dirt track. Briscoe will make his return Friday night to Paragon Speedway, opting to climb behind the wheel of a non-wing sprint car for the first time in three years. Paragon was the site of the Mitchell native’s first sprint car win at the age of 14. It was a win that ensured the Briscoe name would be remembered, marking the end of NASCAR champion Jeff Gordon’s reign as the youngest driver to win in a 410 sprint car. Preparing for a road course by running a sprint car may seem unusual, but it’s a strategy that has paid off for the young driver once already this year. On July 1, just three days before the Cup Series raced at Road America, Briscoe competed at the Plymouth (Wis.) Dirt Track in a winged sprint car.

● Following the Cup Series race at the Brickyard, Briscoe will remain in Indianapolis to compete in the Driven2SaveLives BC39 at the Indianapolis Motor Speedway Dirt Track. The driver-owner will bring three cars to compete in the Midget race and has invited some well-known friends to wheel the additional entries – fellow NASCAR competitor and 2020 Cup Series champion Chase Elliott and IndyCar Series driver Conor Daly.

This is your first trip back to Indiana since before the season started. You’re 23 races into your rookie Cup Series season, driving the No. 14 car for your hero, Tony Stewart, and you’re heading to a track that holds special meaning for everyone, but especially Hoosiers. Will this be an emotional homecoming for you?

“Absolutely. For one, it’s still a little surreal to see my name on the hauler and the 14 car. As a kid, that’s something I dreamed of but I don’t think I ever really thought it would happen. I just loved racing and Tony was the guy we cheered for. It was a big deal when he finally got his win at Indy. For anyone, winning at Indianapolis Motor Speedway is special but, for a Hoosier, it means so much more. It’s hard to explain but there’s so much pride in being from Indiana, so when you see someone from Indiana win at a place that is so revered in the motorsports world, and just in sports in general, it means a lot. The win last year at Indy is something I will never take for granted. I’m happy to be going back and to have fans there. The fans always show so much support for the Indiana guys and, any time you race at home, it’s like you find another gear, so I’m really excited to get back home and experience it all on another level with the fans.”

When you revisit last year’s Xfinity Series win on the road course, what sticks out in your mind the most?

“It’s still hard to believe it happened. I thought I threw it away and then, somehow, we were three-wide. I’m still not sure how that happened, but once we got to the final corner on the final lap I knew that we had it. It was a special moment and I remember heading toward the line and the yard of bricks and just thinking, ‘Man, I wish we had fans here.’ I knew I wanted to climb the fence, I had been telling everyone all week that, if we won, I was doing it and I was kissing the bricks. It didn’t matter to me that it wasn’t the oval, I won at Indy and I may never win again, so I’m not skipping that. I had no idea at the time that it was the first race at Indy with Hoosiers finishing first and second. It was really cool to be able to be a part of that with Justin (Haley). The other piece that, of course, added to how special it was, was to get that win with Zippy. Never in a million years did I think I’d win at Indy for Stewart-Haas Racing with Greg Zipadelli as my crew chief.”

So what are the chances of seeing the HighPoint.com/Ford Performance Racing School Mustang in victory lane?

“Hopefully we can do it again. I think we have a little bit of an advantage going in, but once everyone has a chance to get on track for practice, I think that goes away. It’s clear that road courses have been our strength. Watkins Glen isn’t one of my favorites, but even there we were able to run up front, so I feel pretty good about what we’ve got. I’m glad we’ll get some time on track since I obviously haven’t been on this course in a Cup car, and it’ll be nice to have a chance to qualify for a good starting spot. I think we’ll have a good weekend, but either way it’ll be special to race at Indy with my family and friends there and to kind of see everything come full circle.”

While you’re home, you’ll be doing some dirt racing. How cool is it to get the chance to go back to Paragon Speedway just a few days before the race at IMS?

“Paragon was the place that my dad always raced and then, once I started, I ran there a lot. It wasn’t the closest track for us, so not necessarily my home track, but it’s where I ran a good amount of races and got my first win in a sprint car. I haven’t been in a non-wing sprint car in years, but I felt like I needed to take the chance to race there while I can. One of the reasons I was such a huge fan of Tony’s was that you’d watch him race on Sunday in NASCAR, but then you’d see him come back and race on the short tracks against guys like my dad and it was such a normal thing. I just always thought that was the coolest thing for a kid who was growing up in the same area and wanting to race, and I’m glad I have the chance to go back and kind of do the same thing.”