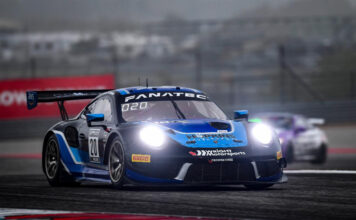 SEBRING, Fla., (September 28, 2021) — For the first time since 2009, SRO America will return to Sebring International Raceway this weekend for the penultimate rounds of the Fanatec GT World Challenge America. Wright Motorsports leads the Pro/Am team championship by 20 points, and after a podium finish at Watkins Glen International last month, drivers Jan Heylen and Fred Poordad are expected to be strong contenders to return to Victory Circle in this weekend’s 90-minute doubleheaders. The duo currently leads in the driver point standings by 58 points and could win their respective championship this weekend.

“Our GT World Challenge America group has had a near-perfect season this year,” said Team Owner John Wright. “Everyone at the shop, the track, and behind the wheel has executed flawlessly to keep us at the top of the standings. It goes to show the quality of our program and the people in it. I feel confident that we’ll be strong here again at Sebring.”

The team’s IMSA WeatherTech SportsCar Championship and Michelin Pilot Challenge efforts competed at the legendary Florida circuit in March, earning a pair of second-place finishes. The team’s Porsche 911 GT3 R will be well suited for the 3.74-mile, 17-turn circuit. Wright Motorsports’ years of previous experience at Sebring International Raceway will give the team a running start, though the time of year may bring different track conditions than in the spring.

Seventeen cars will compete in the Florida doubleheader, ten of which will race in the Pro/Am class. The event will open with two test sessions on Thursday, September 30, followed by two practice sessions on Friday. After a brief qualifying session in the morning, the field will take the green flag for race one on Saturday, October 2 at 1:15 PM Eastern. Race two will commence the following afternoon at the same time, and both races will air live on youtube.com/GTWorld.

Fred Poordad
Sebring should be a great event. We have never raced this car there and look forward to a fun weekend. That track has so much history and is so bumpy and fast that it should provide some great racing opportunities. It may be the last race in warm weather for a while too, so we will enjoy the Florida sun!

Jan Heylen
What’s not to love about Sebring? This place is an awesome track with lots of character and lot of places to overtake. I’m really looking forward to go to Sebring with SRO in the Porsche GT3 R. Our only goal for the weekend is to try and win the championship before heading to Indy for the 8 Hour.