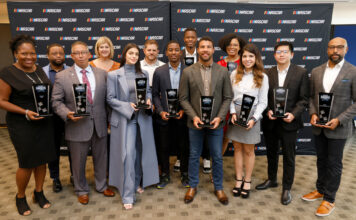 LEBANON, Tenn. (Oct. 7, 2021) – Nashville Superspeedway was honored at NASCAR’s 2021 Drive for Diversity Awards today for its efforts to support diversity and inclusion as well as its results in reaching new audiences for motorsports throughout Middle Tennessee.

The Track Award, which was announced at today’s ceremony at NASCAR’s Hall of Fame in Charlotte, N.C., was given to Nashville Superspeedway, which hosted a sell-out crowd for its inaugural NASCAR Cup Series race in June as part of its first year back hosting NASCAR events after a 10-year hiatus.

During its 2021 race weekend, Nashville Superspeedway hosted more than 120 alumni and guests from Tennessee State University (an HBCU located in Nashville) as part of a collaboration with the TSU Alumni Association, the National Museum of African American Music (NMAAM), Slim and Husky’s Pizza Beeria, Uncle Nearest Premium Whiskey and local transportation company Gray Line. Slim & Husky’s and Uncle Nearest are black-owned businesses with roots in Middle Tennessee, and Uncle Nearest is an official corporate partner of Nashville Superspeedway.

The alumni received a complimentary package including a Tennessee Lottery 250 NASCAR Xfinity Series race ticket and pit pass, a ticket to NMAAM and transportation to the Superspeedway that included food and beverage options.

Also that weekend, approximately 30 students from the Knowledge is Power Program (KIPP) of Nashville attended the Tennessee Lottery 250. KIPP is a free, open-enrollment college preparatory school in low-income communities throughout the United States.

Moses is the first African-American track president in NASCAR history and the NSS full-time staff is comprised of more than 50 percent minorities and/or women.

“We’re honored to receive this recognition from NASCAR’s Drive for Diversity program,” Moses said. “Building our fanbase and expanding our cultural footprint is not only a goal for NASCAR as an industry but for our track in Middle Tennessee as well. As we continue to build upon the foundation of our inaugural NASCAR Cup Series weekend, Nashville Superspeedway looks forward to working with more community groups and welcoming new fans to the sport and our campus.”

In the last year, Nashville Superspeedway has also been able to facilitate financial contributions to improve its surrounding community. In collaboration with Ally Financial, NSS contributed $25,000 to the Urban League of Middle Tennessee, a historic civil rights organization, and $25,000 to Box 55, which supports first responders in Nashville.

Nashville Superspeedway was among other Drive for Diversity Award recipients including:

How Atlanta Motor Speedway’s new asphalt is made