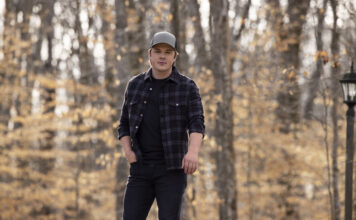 HAMPTON, Ga. (Oct. 8, 2021) – Country music singer/songwriter and Warner Robins, Ga., native Travis Denning will perform a live concert for race fans ahead of the Folds of Honor QuikTrip 500 on March 20, 2022.

Before NASCAR’s stars hit the track for 500 miles of racing action, fans will enjoy Denning’s head-turning catalog of music, which has tallied nearly 400 million streams worldwide.

The Mercury Nashville recording artist is a rising star with hits like “ABBY”, “After A Few”, and “David Ashley Parker From Powder Springs.” Denning has previously toured with Dustin Lynch, opened concerts for Cole Swindell, Alan Jackson, LANCO, and Riley Green, and headlined the “Heartbeat Of A Small Town Tour.”

The concert will be followed by driver introductions, pre-race ceremonies, and the start of the Folds of Honor QuikTrip 500, the first NASCAR Cup Series event to be held on Atlanta Motor Speedway’s all-new, 28-degree banked racing surface.

Limited pre-race track passes will be sold with stage-front access to Denning’s concert and NASCAR Cup Series driver introductions on Atlanta Motor Speedway’s frontstretch. Insiders Club members can get pre-race track passes for a discounted price of $39; all other fans can experience the pre-race festivities up close for $49.

All other grandstand ticketholders can enjoy the concert from their grandstand seat as part of their admission to the March 20, 2022, Folds of Honor QuikTrip 500.

Tickets for the March 18-20, 2022, Folds of Honor QuikTrip 500 NASCAR weekend are available at www.AtlantaMotorSpeedway.com.

A native of Warner Robins, Georgia, singer/songwriter and Mercury Nashville recording artist Travis Denning just released his “clever kiss-off” (Billboard) and “wickedly fun good-riddance anthem” (PEOPLE) “ABBY.” Already amassing over 17 million streams and the track reaching the No. One spot on Sirius XM’s Highway Hot 30, the track earned the most adds at country radio upon add date. Denning celebrated his first No. One and GOLD-certified single in 2020 with the “shadowy” (Rolling Stone) “After A Few.” Accelerating his ascend from a chart-topping single, the song is taken from his debut EP BEER’S BETTER COLD that debuted in the Top 20 of Billboard’s Country Albums chart. Denning first made waves with the release of his Top 40 debut single “David Ashley Parker From Powder Springs.” Denning has toured as direct support for Dustin Lynch and has previously opened shows for Cole Swindell, Alan Jackson, LANCO, Riley Green and his first headlining “Heartbeat Of A Small Town Tour.” With over 398M million streams worldwide, Denning has been spotlighted for his head-turning sound and was previously selected as one of CRS New Faces, an Opry NextStage recipient and a CMA KixStart Artist, as he makes his mark within the industry. Inspired at a young age, Denning developed a love for country, pop, rock and heavy metal and started playing local bars from the age of 16, as he built a strong following from his distinctive songs and raucous guitar solos. A prolific writer with an unquestionable stage presence, Denning moved to Nashville and secured outside cuts by Jason Aldean, Justin Moore, Michael Ray and more. Denning’s newest songwriting cut includes Michael Ray’s Top 20 single “Her World Or Mine.”

About the Folds of Honor QuikTrip 500 weekend:

Since 2015 the Folds of Honor QuikTrip 500 has been the main event in Atlanta Motor Speedway’s spring NASCAR weekend at Atlanta Motor Speedway. This storied race brings awareness to Folds of Honor and its mission to help families of military servicemen and women who have fallen or been disabled while on active duty in the United States Armed Forces.

On Sunday, March 20, 2022, this 500-mile race will be the first for the NASCAR Cup Series on Atlanta Motor Speedway’s revamped racing surface, with NASCAR’s best taking to the reconfigured 28-degree banked corners for the first time.

More information on the March 18-20, 2022, Folds of Honor QuikTrip 500 weekend and ticket availability can be found online at AtlantaMotorSpeedway.com or by calling 877-9-AMS-TIX.

How Atlanta Motor Speedway’s new asphalt is made