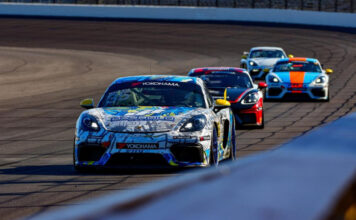 The season ended on a high note for the team’s individual drivers as well.

Lorndale earned his third-place finish on Friday in the No. 6 TPC Racing Porsche 911 GT3 Cup despite contact during the 40-minute sprint that left him unable to continue in Saturday’s second race. Lorndale, running just his first season of professional racing, earned a total of five podium finishes on the season – improving dramatically throughout the season to reach his number one goal.

Torres, who missed one weekend for personal reasons, still rode a series of podium finishes to a fifth-place overall in the Driver Points. Torres needed to drive his No. 16 Stoneleaf/TPC Racing Porsche 911 GT3 Cup to a second-place finish during Sunday’s race to secure both his fifth podium finish and a the team’s championship title. Torres did everything he needed to do, finishing seven seconds ahead of third place to lock down the title.

Jordan Wallace, who ran the No. 35 Dasbold/TPC Racing Porsche Cayman GT4 in the Silver Class for the final portion of the season, capped his rookie season with a third-place finish during Saturday’s race. It was the second podium of the season, all in the past three races, for Wallace, who also swept the Indianapolis weekend at the Porsche Together Fest in a pair of non-points paying races.

Harris Levitas, Director of Race Operations: “That was a really great season this year. I’ve got thank the TPC Racing team for all the hard work they put in this year. All the guys here and all the guys at the shop, they’ve been working like crazy and the Gold Class championship comes down to all the hard work they put into this. Paul, Trevor, Ian, Bob – everybody did such an incredible job. Rob and Pedro put in their hard work and brought us to this championship. Indy is a really cool place to be, there’s so much history here and our team really likes this track. We’ve had very fast cars here every time we’ve come here. We’ve had some really good results here and that makes it that much more fun to come back to. Friday was a race we all want to forget, but we rebounded today and I’m proud of the effort for that.”

Rob Lorndale, Driver, No. 6 Porsche 911 GT3 Cup: “I feel terrific about the season as a whole. I’ve gotten to become really good friends with Pedro this year, and I’ve gotten to be great friends with Spencer as well in addition to learning from him. It was a great experience. My goal at the beginning of the season driving at this new, higher level was simply to improve as a driver and a racer. I feel really good about the progress I made over the course of the season. The Team Championship for TPC Racing really was a team effort, and I’m proud to be a part of what is a great team and contribute to the Team Championship, which is an incredible accomplishment. Mike, Harris, all of the crew, Pedro, Rich – it was a tremendous effort by everybody and everyone should feel really good about what we accomplished together. The together part of that is really important and really cool.”

Pedro Torres, Driver, No. 16 Porsche 911 GT3 Cup: “It was a good weekend. I wish I had a little bit more speed today, I just didn’t. It was a little bit lonely. I like the track (at Indianapolis). A couple of sections are almost autocross, not a lot of speed and a little technical, but it also has a couple of turns that are quite gutsy. Coming into the back you have to stay flat and the car is moving. The guys are great, Harris did a great job. Working with (TPC Racing driver coach) Spencer Pumpelly is fantastic, I like his driving style. Next season we’re looking into Carrera Cup and Porsche Sprint, and maybe some other things, so that’s pretty exciting. It’s my first year competing which was great, and now we’ll develop from there and work on being more consistent.”

Jordan Wallace, Driver, No. 35 Porsche Cayman GT4: “I want to say a big thank you to Dasbold, my supporters, and all of my family and friends who put it on the line to make it this far in the first place. I think the story of the season was adversity, and I think we showed up at the right times and put our best foot forward, especially at the end of the season, to show we are one of the top drivers and teams on the grid. I’m just really pleased with the work that we put in and the amount of effort, time and energy that we’ve all put in trying to be great. That meant a lot to me coming into the last race of the season and I’m glad we could put it back on the podium at probably one of my favorite race tracks in the country now, Indianapolis.”