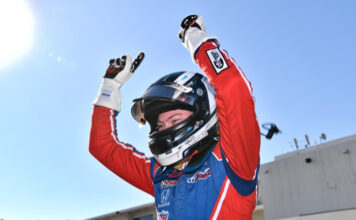 AUSTIN, Texas (November 6, 2021) – Kyffin Simpson confirmed the 2021 title for the Formula Regional Americas Championship Powered by Honda during yesterday’s opening race of the weekend, but it took until this morning for him to really celebrate. Simpson, 17, climbed atop the podium after winning the second race of the weekend at Circuit of The Americas (COTA).

Simpson started the race from the pole position after recording the fastest lap of the race in yesterday’s opening round. However, Ernie Francis Jr., who finished on the podium in Race 1, worked his way around Simpson on lap 1. Simpson fought back in his No. 21 TJ Speed Motorsports / Simpson Race Products / GoPro / Spy Optic Ligier JS F3 and was able to retake the lead by lap 4. From there, it was smooth sailing for Simpson who drove away from the field on his Hankook Tires to collect his sixth win of the 2021 season.

“It was an awesome race,” said Simpson. “We didn’t have the greatest start, Ernie pulled away, but after the first lap, we had an amazing pace for the rest of the race and caught back up to him and drove away from everyone else. I was able to take it easy towards the end and save tires. It was just a perfect race.”

Varun Choksey, driver of the No. 19 TJ Speed Motorsports ADR / Melonseed Ligier JS F3 had a solid start moving from sixth to fourth on the first lap. Choksey kept the momentum going through laps 3 and 4, ultimately moving up to the second position on the fourth lap. From there, Choksey held his pace for the remainder of the race and secured his fifth podium of the season.

“Logan [Cusson] and I had a good battle, but he made a small mistake that allowed me to get through,” Choksey said following the race. “We had a bit of good fortune with Ernie going off, but we also had a really good start and just took it home from there. Pretty happy with that.”

Nick Persing was a wildcard for the podium of Race 2 after starting 12th on the grid. The American moved up to eighth on lap 1 and had a steady progression throughout the rest of the race to finally end up in third on lap 12, joining Choksey and Simpson on the podium at COTA. It was Persing’s best finish of the season, and his first podium.

“I didn’t expect to be here from 12th to say the least,” said Persing, driver of the No. 29 Velocity Racing Development Ligier JS F3. “I love COTA; it’s a good track with its hard braking zones. I managed to put it together today. Yesterday, we struggled with some setup issues, but we worked on it overnight, did a debrief and got everything figured out, and then I went and drove it.”

The FIA-certified Formula 4 United States Championship & Formula Regional Americas Championship are designed as entry-level open-wheel racing series offering young talent the opportunity to demonstrate their skills on an international platform while keeping affordability and safety as key elements. The Championships align with the global FIA development ladder philosophy of using common components to provide a cost-efficient, reliable and powerful racing structure as drivers ascend through the levels on their way to U.S. or global racing success.