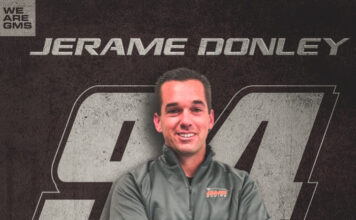 STATESVILLE, N.C. (November 16, 2021) – Jerame Donley has joined GMS Racing to crew chief Ty Dillon and the No. 94 Chevrolet in the team’s inaugural season in the NASCAR Cup Series.

Most recently, Donley spent nine years at Chip Ganassi Racing, serving as an engineer on the No. 42 Chevrolet with drivers Ross Chastain, Matt Kenseth, and Kyle Larson.

Prior to joining CGR, the University of North Carolina at Charlotte graduate worked at Hendrick Motorsports on the set-up plate and as an underneath mechanic for drivers Dale Earnhardt Jr. and Jimmie Johnson. During his time at HMS, Donley earned two Cup Series championships with Johnson in 2009 and 2010.

The Winston Salem, N.C. native grew up racing go-karts, bandoleros, and late models, after his father, Craig, retired from spotting for Dale Earnhardt Sr.’s team at Richard Childress Racing in the early 1990s.

Donley currently resides in Mooresville, N.C. with his wife, Jenna, and two rescue dogs, Bear and Bandit. The Donley family will welcome their first child in February 2022.

The No. 94 Chevrolet team will participate in the NASCAR NextGen test at Charlotte Motor Speedway on November 17-18, marking Donley and Dillon’s first on-track activity together.

Stay up to date with all GMS Racing news by visiting the team’s official website at www.GMSRacing.net, or by following along on social media with the handle, @GMSRacingLLC.