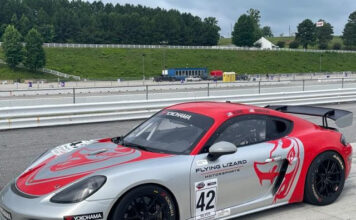 “I am really looking forward to the new challenge in 2022 in the Porsche Sprint Challenge,” said Program Manager Darren Law. “All our drivers had such a great season last year and we came away with two Championships. This is good momentum to start the new year with. Chris has taken delivery of a 992 Cup so we have a new model to get familiar with, we have planned additional testing and development and we’re making a change in engineering. We have brought on Joe La Joie as an engineer this year. This is somewhat of a reconnection between him and me. He engineered several cars for me when I drove, and I feel he will be a great addition to our program. He is very methodical and has experience with Porsche. We know that the competition will be tougher and our drivers will have some new tracks to learn but this is a great group of people and should be a lot of fun.”

Having just concluded a successful season where he expanded his racing resume, Chris Bellomo holds previous experience in the USAC Porsche Sprint Challenge, having run the double-header event at Circuit of the Americas in 2021. After finishing eighth in his series debut in race one, he followed it up with a fifth-place finish in race two. Racing his Porsche 991 GT3 Cup Car, Bellomo also ran a full season in the Yokohama Drivers Cup where he secured the Platinum class Divers Championship with eight wins and an additional ten podiums. He also expanded to IMSA’s Porsche Carrera Cup North America Presented by the Cayman Islands series, where he closed out the year with two podiums at Michelin Raceway Road Atlanta. This season, Bellomo will race his 2021 992 Porsche GT3 Cup car in the ten Porsche Sprint Challenge events across North America, beginning with the season opener March 11-13 at Sebring International Raceway. After several years of racing a custom white, orange, and yellow livery, Bellomo’s Porsche will sport the iconic Flying Lizard livery the team has sported since 2004 but will switch out the traditional red and silver for grey and orange. Returning as Bellomo’s driver coach will be former Lizard Johannes van Overbeek, who worked with Chris last season to help secure the Drivers Championship.

“This year we are looking to build on our 2021 season with a new car, new livery, and new series. We will be racing a 2021 992 Porsche GT3 Cup car in Porsche Sprint Challenge in both West and National series. Johannes and I are looking forward to testing and becoming familiar with the new car to prepare for our first race of the season at Sebring. We will have a few new tracks to prepare for with testing and look forward to working with our new engineer, Joe La Joie. We are hoping for another successful year with FLM and are excited to race with our updated FLM livery!”

“This will be my first season with the USAC Porsche Sprint Challenge,” said Bonderson. “I am looking forward to learning new tracks, meeting new competitors, learning a lot, and having fun. I can’t wait to start the season at Sebring, a new track for me.”

Fresh off his own championship title celebration, Mike Gaulke matched his teammates’ excitement for the approaching season. In the Yokohama Drivers Cup Silver class, Gaulke raced his white and orange liveried Porsche to the class and overall championship titles with 20 podiums in 22 races. He and his Porsche 718 Cayman GT4 MR will join the team in their full-season Porsche Sprint Challenge endeavors, racing in the GT4 class. Gaulke will have Thomas Merrill return again for another year as his driver coach.

“Coming off last season, which was my best ever, winning the Yokohama Drivers Cup class championship in GT4 as well as the overall points championship, I am looking forward to competing in this year’s Porsche Sprint Challenge,” said Gaulke. “The increased level of competition and four new tracks will present new challenges, but that is the joy of this sport. I am very fortunate to have the support of a storied race team in Flying Lizard Motorsports, an outstanding coach in Thomas Merrill, and a trusted crew chief in Cris Weber. I am excited to get back on track!”

For future event and tune-in information, visit lizardms.com to subscribe to the team’s distributions and further season updates.