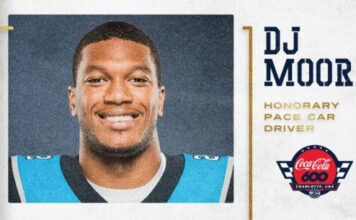 CONCORD, N.C. (May 16, 2022) – Carolina Panthers wide receiver DJ Moore has been part of some high-pressure drives during his NFL career, but this Memorial Day Weekend, the fifth-year veteran will trade his football helmet for a racing helmet when he leads the field to green as the honorary pace car driver for the 63rd running of the Coca-Cola 600 at Charlotte Motor Speedway on May 29.

Moore will join an all-star cast of current and former Panthers to serve in dignitary roles at America’s Home for Racing, joining Christian McCaffrey, Greg Olsen and Thomas Davis who have helped bring the NASCAR crown jewel event to life through the years behind the wheel of the Toyota Camry TRD pace car.

“Big time players make big time plays on big stages,” Moore said. “I’m used to pulling away from guys on the field, but it’s going to be totally different being out front of the Coca-Cola 600. I can’t wait to get the party started.”

Moore ranks fourth in Panthers franchise history with 4,313 career receiving yards and sixth in franchise history with 301 career receptions. He is the only NFL wide receiver with at least 1,200 scrimmage yards in each of the last three seasons (2019-21), and is just the third Panther ever with three consecutive 1,000-yard receiving seasons (Steve Smith Sr. and Greg Olsen).

Prior to watching Moore lead the 40-car field to the green flag, Coca-Cola 600 ticketholders will also enjoy a FREE pre-race concert featuring the legendary Rock and Roll Hall of group Lynyrd Skynyrd and a rousing display of patriotism as NASCAR salutes the men and women of the U.S. Armed Forces in a spectacular pre-race event on the eve of Memorial Day.

TICKETS:
Tickets are still available for the May 27-29 Coca-Cola 600 Weekend, with three-day packages starting at $99. Weekend tickets for children ages 12 and under are just $10. Fans can purchase tickets online at www.charlottemotorspeedway.com or by calling the ticket office at 1-800-455-FANS (3267). Admission to Circle K Speed Street concerts by Flo-Rida (Friday) and The Steve Miller Band (Saturday) is free with any race ticket. Sunday’s Lynyrd Skynyrd pre-race concert is free with purchase of a Coca-Cola 600 race ticket.