A Look Back at Gilliland’s Rookie Season to Date 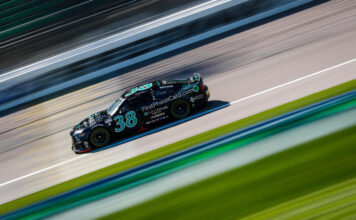 MOORESVILLE, N.C. (May 18, 2022) – This weekend, Todd Gilliland and his No. 38 First Phase Ford team travel to the Texas Motor Speedway for NASCAR’s All-Star race weekend. Gilliland will compete in the All-Star Open in hopes of winning of the race stages or race to advance to Sunday night’s All-Star race. This will be the rookie driver’s first All-Star Open event.

The NASCAR Cup Series season has completed 13 races in its 2022 schedule. Gilliland has a best finish of 15th. He has five top-20 finishes. The team has had fast cars at both Daytona and Talladega, but late race accidents have wiped out top-10 or top-15 finishes. Gilliland is behind Daytona 500 winner Austin Cindric in the rookie battle and ahead of his friend Harrison Burton.

Gilliland talks about his season going into the All-Star break.

“It’s been up and down, but I think we knew it was going to be like that going into the season,” said Gilliland. “The competition in the NASCAR Cup Series is just a big step above anything else. It’s going to take a little bit to learn the car, some of the tracks, and how we race in the Cup Series. I know I have to be patient, but it’s tough.

“Going into the summer, I want to see myself work on qualifying and work on getting better during the races. I want to take top-20 runs and finish top-15 and take top-15 runs and get us into the top-10. We are going to work hard on that because I know that we’re capable. We’ve proved it, but now it’s going to be time to take that next step.”

Gilliland and the No. 38 First Phase Ford team will be supported by First Phase this weekend and throughout various races in the summer and fall. The new credit card from CURO Credit, LLC, issued by The Bank of Missouri, provides pathways to financial freedom for people with unestablished or imperfect credit.

First Phase is a new credit card issued by The Bank of Missouri that provides pathways to financial freedom for people with unestablished or imperfect credit. It’s a powerful tool that can provide flexibility and help fuel the next chapter of their financial future. First Phase is the doing business assumed name of CURO Credit, LLC, whose ultimate parent company is CURO Group Holdings Corp (NYSE: CURO).