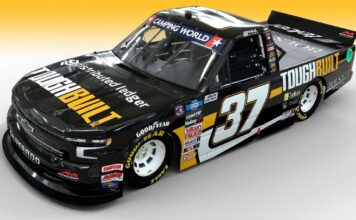 Charlotte will signify the first of several Truck Series races this season where Gutiérrez, a former winner in the ARCA Menards Series will pilot the team’s second entry on a part-time entry with additional races to be announced soon.

“I am very excited to reach the goal of getting the opportunity to make my NASCAR Camping World Truck Series debut with AM Racing this weekend at Charlotte Motor Speedway,” said Gutiérrez. “I am so thankful to everyone that has made this possible and is supporting me in this next chapter of my career.”

Gutiérrez’s Truck Series debut will be supported by a roster of his longtime supporters not only in ARCA competition but throughout his racing career in his homeland of Mexico.

TOUGHBUILT will serve as the primary marketing partner of the No. 37 Chevrolet Silverado RST, while additional support pours in from Bolsa DX, GoGig, Teknekk and Telmex.

“After years of competition, diligent work, and training, TOUGHBUILT is proud to see Max take this essential step in his career with our Pro-grade ethos backing him up,” offered Kam Diba, Chief Creator and Chief Marketing Officer TOUGBUILT. “We are excited to stand with him as he celebrates this landmark achievement and breaks new ground with NASCAR.”

Mike Francis, CEO of Distributed Ledger Inc. | BolsaDX offered, “We have been watching Max rise through the ranks over the last year and a half as he continues to push new boundaries with every race,” he said. “The Distributed Ledger Inc. and BolsaDX teams couldn’t be prouder of Max and his accomplishments. We wish him and his team the best of luck this weekend in Charlotte.”

A three-year partner of Gutiérrez, TekNekk LLC. also makes the jumps to Trucks.

“TekNekk.com is a remote-control parental app that protects a child’s spine, mind and safety, and a proud sponsor of Max Gutierrez for three seasons,” explained TekNekk LLC CEO Troy Wilke.

“Max will debut in one of NASCAR’s National Divisions on May 27 at Charlotte Motor Speedway. We are excited to see him continue to represent our product in the United States. Everyone at TekNekk.com wishes Max and AM Racing the best of luck.”

GoGig who joined the partnership lineup for Gutiérrez in February at Daytona (Fla.) International Speedway will also adorn its logo on the No. 37 AM Racing Chevrolet Silverado RST.

“GoGig is proud to sponsor Max Gutierrez and the Toughbuilt car for Max’s debut,” sounded GoGig Founder & CEO Chris Hodges. “GoGig’s founding principle was to remove bias and promote diversity + inclusion in the hiring process for job seekers by allowing them to remain anonymous.

“The entire GoGig team couldn’t be prouder to represent Max and his Mexican heritage in the same manner for this upcoming race at Charlotte Motor Speedway.”

Veteran AM Racing crew chief Jamie Jones will serve as crew chief for Gutiérrez at Charlotte on Friday night. The two worked together in two ARCA Menards Series races earlier this season at Daytona and most recently at Talladega (Ala.) Superspeedway where the Mexico City, Mexico native produced an impressive 10th place finish after starting 24th.

“We are thrilled to be a part of Max’s next chapter in making the transition to the NASCAR Camping World Truck Series,” said AM Racing team principal Kevin Cywinski.

“Through our great relationship with Rette Jones Racing Development, we have been able to have some success with Max this year and we look forward to continuing his steady progression and success in the NASCAR Camping World Truck Series not only at Charlotte but other races in 2022.”

In seven career premier ARCA Menards Series starts, the 19-year-old has one top-10 and carries a series’ average finish of 16.0 over three years.

TOUGHBUILT is an advanced product design, manufacturer and distributor with emphasis on innovative products. Currently focused on tools and other accessories for the professional and do-it-yourself construction industries.

We market and distribute various home improvement and construction product lines for both the do-it-yourself and professional markets under the TOUGHBUILT brand name, within the global multibillion dollar per year tool market industry. All of our products are designed by our in-house design team.

Since launching product sales in 2013, we have experienced significant annual sales growth.

Our mission is to provide products to the building and home improvement communities that are innovative, of superior quality derived in part from enlightened creativity for our end users while enhancing performance, improving well-being and building high brand loyalty.

Additional information about the company is available at: toughbuilt.com.

AM Racing is a NASCAR Camping World Truck Series (NCWTS) team headquartered in Statesville, N.C.
Established in December 2015, AM Racing is prided on faith, honesty and intelligent performance.

The No. 22 team has named Austin Wayne Self as its primary driver for the 2022 season while also expanding to a second No. 37 truck with a rotation of drivers this season.