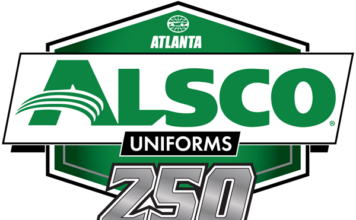 Sam Mayer
No. 1 Accelerate Professional Talent Solutions Chevrolet
• Sam Mayer earned his first career top-10 finish in the NASCAR Xfinity Series during his first start at Atlanta Motor Speedway in July of 2021.
• In 15 starts at tracks measuring between 1-2 miles in length in the NXS, Mayer has five top fives and seven top 10s, with a best finish of third at Charlotte Motor Speedway and Texas Motor Speedway earlier this season.
• Mayer raced as high as third during the first event at the newly paved and configured Atlanta before finishing 21st after a cut tire took him out of contention.
• With 10 races before the NXS Playoffs begin, Mayer currently sits 97 points above the playoff cutline.

Josh Berry
No. 8 HarrisonsUSA.com Chevrolet
• In Atlanta earlier this season, Josh Berry started second and led three laps before being involved in a multi-car incident on lap 153.
• Berry started from the back last week at Road America and drove to a third-place finish to earn his seventh top-five finish of the 2022 NXS season.
• In 24 starts on tracks measuring between 1-2 miles in length, Berry has recorded three wins (Charlotte, Dover, Las Vegas), eight top fives and 12 top 10s while leading the field for 288 laps.
• Berry currently sits fifth in the championship standings only 74 markers from first place.

Noah Gragson
No. 9 Bass Pro Shops / TrueTimber / Black Rifle Coffee Chevrolet
• In the first Atlanta race this season, Noah Gragson started from the pole and led 38 laps prior to a pair of incidents that relegated him to a 26th-place finish. It was the first time in five AMS starts that Gragson had not finished in the top 10.
• The 23-year-old Las Vegas native has been stellar at Atlanta, earning finishes of second, third, fourth and ninth and leading 58 laps in his five starts.
• On 1.5-mile tracks in his career, Gragson has 16 top-five and
22 top-10 finishes in 35 starts and has led 470 laps.
• Gragson and the No. 9 team are currently second on the playoff grid and fourth in driver points after 16 races this season.

Justin Allgaier
No. 7 BRANDT Professional Agriculture Chevrolet
• Justin Allgaier will make his 14th career NXS start at Atlanta this weekend.
• In 13 previous races at the 1.54-mile quad-oval, Allgaier has earned one win, three top fives and eight top 10s.
• Allgaier’s lone victory came in March of 2021, after the JRM driver led 47 of the final 50 laps.
• The Illinois native has finished seventh or better in five of the last six races at Atlanta dating back to 2018.
• In his NXS career, Allgaier has scored 10 wins, 65 top fives and 128 top 10s in 207 starts on tracks between 1 and 2 miles in length, with his most recent victory coming two weeks ago at Nashville Superspeedway

“We had a really good run going earlier this year in Atlanta but a cut tire really cost us a good finish. We were able to get back on the lead lap but it was just too late at that point. This Accelerate Professional Talent Solutions team never gave up. I know we will have another fast Camaro this weekend, we just need a little luck to go our way.” – Sam Mayer

“It’s going to be interesting heading back to Atlanta this weekend. It’s our second race on this new configuration and I feel like we learned a lot here back in March. This place definitely races more like a superspeedway now, so I know that we are going to have a ton of speed out of our BRANDT Professional Agriculture Chevrolet. Hopefully we can find ourselves in the right position on Saturday afternoon and avoid any trouble out there to be in contention for the win when it counts.” – Justin Allgaier

“Atlanta is a track that hasn’t been good for me in the past. I don’t think I’ve had an uneventful race there yet but I know this HarrisonsUSA.com team is going to unload with a fast No. 8 Chevrolet on Friday. Hopefully I can stay out of anything that happens and be contending for the win at the end. With the new configuration really anything can happen and we saw that earlier this year.” – Josh Berry

“We were fast at Atlanta in the spring, and I have no doubt we’ll be fast again this weekend. Luke (Lambert, crew chief) and our team have given me great Bass Pro Shops/TrueTimber/Black Rifle Coffee Chevrolets, and we were in strong position in the first race at Atlanta. We’re 10 races from the playoffs starting, and now is the time to build momentum.” – Noah Gragson

• JR Motorsports at Atlanta: JR Motorsports has competed at Atlanta Motor Speedway a combined 51 times in the NXS. Over the course of these 51 starts at the 1.54-mile facility, JRM has tallied four wins (two with Kevin Harvick, and one each with Justin Allgaier and Jamie McMurray), 16 top fives and 32 top 10s. JRM’s most recent win came with Allgaier during the 2021 season. The average finish for JRM at Atlanta is 10.7 which ranks as the fourth best single-track average for the organization.
• Harrison’s USA: When Josh Berry finishes inside of the top eight, head on over to harrisonsusa.com and use code “Josh8” to receive eight percent off your online order.
• Atlanta Fan Stage: JRM driver Sam Mayer will be at the Atlanta Fan Stage in the Fan Zone on Saturday, July 9 from 2:15 p.m. – 2:30 p.m.
• Souvenir Rig: JRM drivers Justin Allgaier and Josh Berry will be signing autographs at the JR Motorsports/Hendrick Motorsports souvenir rig on Saturday, July 9 starting at 1 p.m.