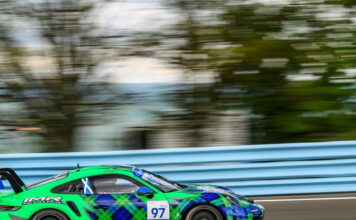 ELKHART LAKE, Wis. (1 August 2022) – Irish Mike’s Racing will be looking to build on momentum from Watkins Glen International and a productive test session when it returns to the IMSA Porsche Carrera Cup North America presented by Visit Cayman Islands for this weekend’s Round 6 at Road America.

Irish Mike Racing driver Craig Conway finished a season-best eighth in the tough Pro-Am class in the most recent race at The Glen, driving the No. 97 Diamond Suzuki Porsche 992 in the Porsche Pro-Am division. Since then, the team tested at the famed Wisconsin circuit.

“We had a pretty good test at Road America, and we learned some things,” Conway said. “We’re heading in the right direction, so we’re looking for continued improvement. We’ve got to keep chopping away. I want to be able to run decent in the class and be competitive, and we’re getting it done.”

Conor Flynn drives the No. 95 FlynnCo Cars / Chillout Systems Porsche 992 in the Porsche Pro-Am division, also improving his finishing position in Race 2 at WGI. The team has continued to adopt to the new 992 platform in its first season with the car, and is looking to convert lessons learned in testing into another productive weekend as the series heads to the fan and driver-favorite track in Wisconsin.

“The test was really good, and hopefully we have similar conditions this weekend so we can kind of hit the ground running,” said Flynn. “There is a lot to learn and unlock with this new car and every time we pull it off the trailer we end up with a ton of notes and improvements by the time that we are loading up again so it’s been a great process for us. Road America is just an awesome track and I think we have a good chance to be strong this weekend.”

“I was fourth, but right on the bumper of third,” Conway said. “We had a good run in the old car, but I’ve just got to get a little more comfortable in the new car. Hopefully, we can do a similar thing this year, if we’re lucky.”

Conway brings plenty of experience to the four-mile circuit.

“I’ve been there quite a bit,” he said. “The track itself is fast. I’m pretty comfortable there. It’s one of the tracks I like pretty well. I remember doing a six-hour race there in the Rolex Series. I had to change the transmission during the race, and we did it in 12 minutes! Then we managed to come back and beat Irv Hoerr for the win. We had a lot of pizzazz back then – the problem was, it was 20 years ago! At least, in the Carrera Cup, we’ve got the classes split by ages. The darn thing for me is I’m the oldest guy in the Blue class (Pro-Am), and I missed the yellow class (Am) by around two weeks. So while I’m racing the guys in my class, I’m also looking to see how the guys in Am are doing, since that’s the class I should be in.”