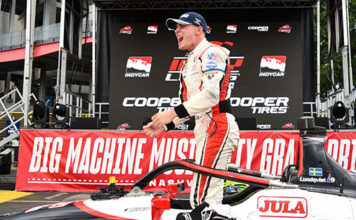 NASHVILLE, Tenn. (Sunday, Aug. 7, 2022) – Linus Lundqvist showed why he is the class of the Indy Lights Presented by Cooper Tires field this season, leading all 35 laps from pole Sunday to win the Indy Lights Music City Grand Prix on the streets of Nashville.

Lundqvist earned his series-leading fifth victory this season in the No. 26 HMD Motorsports with Dale Coyne Racing entry, beating second place Sting Ray Robb to the checkered flag by 7.2221 seconds in the caution-free race. Lundqvist expanded his series lead to a commanding 95 points with just four races remaining this season.

Swedish driver Lundqvist was fourth quickest in both practice sessions this weekend but started from pole when the field was set by entrant points after qualifying was canceled Saturday due to thunderstorms.

Andretti Autosport teammates Robb and Hunter McElrea finished second and third, respectively. Robb passed McElrea on Lap 32 for second, the highlight of a stirring duel between the duo for many laps on the 11-turn, 2.1-mile temporary street circuit that includes two trips per lap over the Cumberland River via the Korean War Veterans Memorial Bridge.

McElrea stayed close to Lundqvist for the first six laps around the tricky, bumpy circuit. McElrea nearly hit the rear of Lundqvist’s car in Turn 4, exiting the bridge, on Lap 5 as he tried to look for an opening.

Lundqvist’s checkout from the rest of the field shined a spotlight on the fierce race for second between teammates Robb and McElrea.

Robb looked for a way past many times over the closing half of the race. He finally made the decisive pass on Lap 32 as both drivers exited the bridge and headed toward Turn 9. Robb’s No. 2 Sekady car and McElrea’s No. 27 Andretti Autosport machine made contact, but Robb quickly gathered himself and dove under McElrea for second place.

McElrea’s car appeared damaged from the contact, and Robb drove away to beat his teammate to the finish by 3.1723 seconds.

While Lundqvist holds a lead of nearly two races’ worth of points over second-place McElrea, the tight duel between Robb and McElrea mirrors the race for second in the standings. McElrea leads third-place Robb by just eight points, with Andretti Autosport teammate Matthew Brabham is just 20 points behind McElrea in fourth.

The next Indy Lights race is the second and final oval race of the season, Saturday, Aug. 20 at World Wide Technology Raceway in Madison, Illinois, just across the Mississippi River from St. Louis. Live coverage starts at 4:15 p.m. ET on Peacock Premium and the INDYCAR Radio Network.

Cooper Tire, a subsidiary of The Goodyear Tire & Rubber Company (NASDAQ: GT), specializes in the design, manufacture, marketing and sale of passenger car, light truck, medium truck, motorcycle and racing tires. Cooper is headquartered in Findlay, Ohio, with manufacturing, sales, distribution, technical and design operations located in more than one dozen countries around the world. For more information on Cooper, visit www.coopertire.com, www.facebook.com/coopertire or www.twitter.com/coopertire.

Goodyear is one of the world’s largest tire companies. It employs about 72,000 people and manufactures its products in 55 facilities in 23 countries around the world. Its two Innovation Centers in Akron, Ohio, and Colmar-Berg, Luxembourg, strive to develop state-of-the-art products and services that set the technology and performance standard for the industry. For more information about Goodyear and its products, go to www.goodyear.com/corporate.