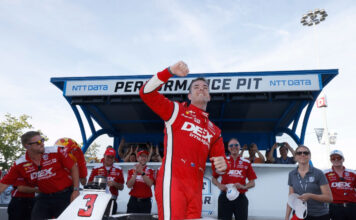 McLaughlin (No. 3 Chevrolet) recorded a final lap of 1 minute, 14.5555 seconds (101.401 mph) on the 2.1-mile, 11-turn layout in the Firestone Fast Six to secure his second pole of the season. His other pole came at the season-opening race on the streets of St. Petersburg, where he went on to his first career NTT INDYCAR SERIES win.

The NTT INDYCAR SERIES will return to the track at 9:15 a.m. CT Sunday for a 30-minute warm-up session. The 80-lap Big Machine Music City Grand Prix, Round 14 of the 17-race NTT INDYCAR SERIES, will take the green flag at 2:30 p.m. NBC television coverage begins at 2 p.m.

Saturday Notebook: Fourteen-year-old Brent Crews (No. 70 Ford), who became the youngest Trans Am winner in history last race at Road America, made it two in a row with a win in Saturday’s race. Crews, who started second, earned a 1.54-second victory over Connor Mosack (No. 28 Chevrolet) in the 70-minute timed race. Nashville’s Scott Borchetta (No. 48 Ford), who finished 3.213 seconds back of Crews, finished third for the first podium of his career. … Indy Lights Presented by Cooper Tires qualifying was cancelled due to inclement weather. The starting line-up will be based off entry points. Points leader Linus Lundqvist of HMD Motorsports with Dale Coyne Racing will start on the pole while Hunter McElrea of Andretti Autosport will start second. Lundqvist leads McElrea by 76 points coming into Sunday’s race that begins at 12:10 p.m. … Onofrio Triarsi went wire to wire to take the win in the SRO GT America opener of the weekend doubleheader. Justin Wetherill finished runner-up to give Ferrari the top two spots. Jason Daskalos, in an Audi, was third with SRO3 drivers sweeping the podium. Robb Holland was the top GT4 finisher in a Porsche, taking 10th overall. The weekend finale is a 40-minute, timed race that starts at 10:55 a.m. Sunday. … Matt Brabham won the opening race of the Speed Energy Stadium SUPER Trucks doubleheader weekend, edging Gavin Harlien by 0.7009 of a second in the 10-lap event. Max Gordon finished third. Brabham’s win was his first of the season and 24th of his career, which ranks third all time.