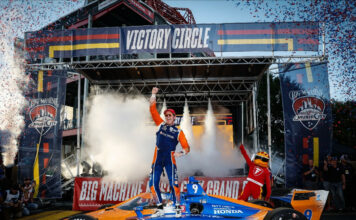 Dixon held off Team Penske’s Scott McLaughlin by 0.1067 of a second to secure his 53rd career win – and second of the season – to break a tie with the legendary Mario Andretti. The all-time record of 67 wins is held by another legend, A.J. Foyt.

The 80-lap, second running of the Big Machine Music City Grand Prix had eight cautions on the technical 2.1-mile, 11-turn layout around Nissan Stadium and across the Korean War Veterans Memorial Bridge that fell nicely into Dixon’s favor. He started 14th, got caught up in an incident and on Lap 29 was actually running last in the 26-car field after a penalty for emergency service of his damaged car in a closed pit. The CGR race strategy included six pit stops – second most in the race – to help move him through the field and into contention.

“Kudos to the team,” Dixon said. “We had a big crash there that took half the floor off the car. We had to take four turns of front wing out, so we had no grip. Nashville is so awesome.”

McLaughlin, the pole sitter, and Dixon’s teammate Alex Palou, who finished third, dominated the first half of the race that led to podium finishes for both. McLaughlin led the first 22 laps before Palou took the point for a race-high 31 laps.

Nashville’s Josef Newgarden inherited the lead but needed a number of caution laps to avoid pitting and losing the lead. The Team Penske led 12 laps before he opted to pit during a caution and settled for a sixth-place finish despite contact with Andretti Autosport’s Romain Grosjean.

Dixon pounced on the opportunity as he took the lead from Newgarden on Lap 66 and was able to hold off a charging McLaughlin for the final 15 laps. McLaughlin made a final dash to the inside of Dixon heading to the checkered flag on the front straight but fell just shy.

“We were worried about him (McLaughlin) because I knew he would take chances,” Dixon said. “He kind of has to with the standings at the moment. He was super fast as well. He had fresh tires, too. I was a sitting duck. If there had been a lap or two more, it would have been really tough to do.”

“We were alongside there across the finish line,” McLaughlin added. “But man, we were 16th on that last pit exchange and had an awesome restart, and then the car was fast. Just fell short at the end. Congrats to Scotty. Always dreamed of racing him to the finish. That was a proper duel.”

The victory moved Dixon into prime contention for the NTT INDYCAR SERIES championship, improving to second behind Team Penske’s Will Power. Power, who finished 11th, owns a six-point lead over Dixon, 450-444, with three races remaining in the 17-event season.

The race was delayed for 90 minutes due to inclement weather, including lightning in the area.

Sunday Notebook: Linus Lundqvist of HMD Motorsports with Dale Coyne Racing continued his dominant season with his series-leading fifth win in Sunday’s Indy Lights Presented by Cooper Tires race. He started on the pole and led all 35 laps as he cruised to a 7.221-second victory over Sting Ray Robb of Andretti Autosport. Robb’s Andretti Autosport teammate Hunter McElrea was third in the caution-free race. … Justin Wetherill, who finished runner-up in Saturday evening’s opening race, earned the victory in Sunday’s SRO GT America finale. He edged his Triarsi Competizione teammate Onofrio Triarsi, Friday’s race winner, by .0342 of a second to give Ferrari the top two spots. Mirco Schultis, driving a Corvette, finished third for Mishumotors in the SRO3 class. Robb Holland, driving a Porsche for Rotek Racing, was tops for the second time in two races in the GT4 class as he took ninth overall. … Gavin Harlien, who finished runner-up in Friday’s Stadium SUPER Trucks opener, won Sunday’s finale. He nipped Saturday’s winner Matt Brabham by 0.0811 of a second for his second win of the season.