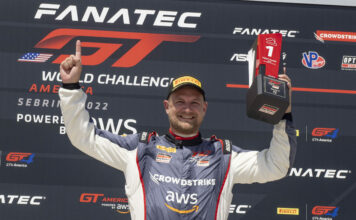 Each series has two more races left on the calendar, with the finale at Indianapolis Motor Speedway.

“It’s a fantastic championship for the CrowdStrike Racing by Riley Motorsports team and a great championship for Mercedes,” said Kurtz, co-founder and chief executive officer of CrowdStrike. “I couldn’t be happier with the performance of everyone this year. It’s great to clinch this championship with three races to go.”

Said Boehm after claiming his championship: “There’s so much work that goes on behind the scenes unnoticed. I have to thank every one of those folks so much. For CrowdStrike and AWS, to get another championship with them, to win it today and clinch it here… what a season!”

Kurtz Doubles up in GT America

The weekend victories added to the highlights and high marks on the season for CrowdStrike, the Official Internet and Cloud Security Provider for SRO Motorsports America. Kurtz clinched his GT America title in the No. 04 CrowdStrike/AWS Mercedes-AMG GT3 using much of the same moxie as he has all year: with patience, decisiveness and speed.

He started second and swapped the lead on the opening lap with Jason Harward before settling into second for the first 15 minutes. The two drivers worked through the GT4 class traffic and ran three-wide in the middle part of the circuit with Kurtz taking back the lead on a tidy move into a tight hairpin turn that saw the CrowdStrike/AWS Mercedes AMG emerge first – a position Kurtz didn’t relinquish the rest of the way.

“I went for it and was able to put it away,” Kurtz said. “It was clean racing by everyone this weekend. The pressure is off here so it’s a matter of doing the best we can in collecting more podiums, trophies and hopefully some wins.”

He got his wish in Sunday’s GT America race. Kurtz led the first half of the race before falling back to second in traffic in a bit of a role reversal. Once clear, however, Kurtz was able to chase down the race leader, erasing what had been a 3.2-second gap with 10 minutes remaining to move back to the lead a lap later.

“Jason did a great job, but the CrowdStrike Riley guys gave me another really good Mercedes-AMG,” Kurtz said. “We had the lead for a good bit of the race but got held up in traffic. Sometimes you win and sometimes you lose in traffic. He did a great job of clearing it. Once I got through it all, I just put my head down and cranked out some really good laps to the end and was able to get by him to notch another win.”

Boehm won his second title in TC America – going along with his 2020 TCA crown – in dominating style. He swept the weekend in the No. 9 CrowdStrike/AWS Honda Performance Development Civic Type R TC to give him eight wins on the season.

Boehm won from pole position by leading from flag-to-flag in Saturday’s first TC America race of the weekend after a tough battle in the race’s opening half with fellow TC competitor Clay Williams. Boehm never flinched with an error-free run to win for the first time at Sebring in SRO competition.

“When you’re in front, it seems like every noise and every little vibration is something that is going to doom you for the race,” Boehm said. “But we had a great qualifying and got a massive lap in. I knew it didn’t represent the pace of everyone else, so when the race started things were close. They kept me honest but I didn’t make any mistakes.”

Sunday’s clincher wasn’t quite as routine… but it was close. Boehm took the lead on the opening lap from second on the grid but slotted back to his original starting spot by the halfway mark. Down 1.5 seconds, Boehm began to reel in the leader and made the winning and championship-clinching with 12 minutes to go, using traffic to retake the advantage.

He went on to win by seven seconds.

“The first thing that comes to mind is teamwork,” Boehm said. “I’m out there on the track and it looks like I’m there all alone. But there is a giant group of people that were celebrating when we cross the line. We owe so much to them and all their hard work. If you take any of those pieces away, it all falls apart. I’m glad to be a part of the team and bring the whole thing up. It’s nothing about me. It’s about the teamwork.”

Kurtz and Colin Braun rebounded from a tough Road America weekend to climb back on the podium in a hotly contested Pro/Am category of Fanatec GT World Challenge America Powered by AWS.

They teamed for a runner-up finish in Saturday’s 90-minute race in the No. 04 CrowdStrike/AWS Mercedes-AMG. That plus Sunday’s fourth-place finish unofficially put Kurtz and Braun second in Pro/Am points going into the Eight Hours of Indianapolis in two weeks, which will be worth double the amount of points over a standard GT World Challenge race.

Kurtz began second in Saturday’s race and drove the first 40 minutes before the mandatory pit stop for fuel, tires and driver change to Braun. The No. 04 CrowdStrike/AWS Mercedes-AMG exited the pitlane right on the bumper of the class-leading car. Braun never trailed by more than a half-second the rest of the way but was happy to take second-place points.

“George did a great job. We had a great pit stop from the CrowdStrike Riley guys,” Braun said. “We came in nose-to-tail and left nose-to-tail. It gets down to the point where you’re just waiting for someone to make a mistake because of the competitiveness of this class and how tight it is. You’re waiting for something to happen and keeping the pressure on. We were closer and closer and finished close. I’m proud of the guys. They did a super-good job. The Mercedes was good on tire wear but it wasn’t quite enough to make that lunge move I needed to get past. All in all, it’s good for the points and gives us some good confidence.”

Among the groups Boehm credited for his success this weekend and all season is Operation Motorsport. A not-for-profit, Operation Motorsport provides a chance for retired and disabled service members to use their skill sets in a variety of areas including paddock operations, car and tire prep, marketing, social media and other key areas that are part of a racing program. At CrowdStrike’s signature user conference, Fal.Con, last week in Las Vegas, the company announced a landmark, multi-year partnership with Operation Motorsport.

CrowdStrike also is a proud part of American Corporate Partners (ACP), which provides CrowdStrike mentors for service members looking to transition to the private sector, and a partner with HireMilitary, to provide meaningful internship experiences to service members exiting the military via the DoD SkillBridge program.