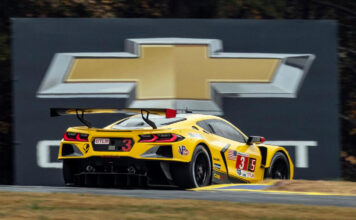 DETROIT (Sept. 28, 2022) – Winning races is the goal every time out for Corvette Racing. There’s a bit more “want” coming from the team this weekend, however.

The 10-hour Petit Le Mans is the final round of this year’s IMSA WeatherTech SportsCar Championship. It’s the 25th running of the endurance classic at Michelin Raceway Road Atlanta with Corvette Racing looking for its ninth class victory since its first race there in 1999. That doesn’t tell a complete story, unfortunately.

It’s been 12 years – 4,378 days for those counting – since Corvette Racing last won Petit Le Mans. It’s the longest stretch between victories at any event for the program… a situation the team plans to rectify Saturday.

Full-season teammates Antonio Garcia and Jordan Taylor welcome Nicky Catsburg back to the driver’s seat of the No. 3 Mobil 1/SiriusXM Chevrolet Corvette C8.R in the GT Daytona (GTD) PRO class. The two seek their second long-distance victory of the season, having won the Mobil 1 Twelve Hours of Sebring in March.

That triumph plus a strong showing at June’s Six Hours of The Glen have propelled Garcia, Taylor and the No. 3 Corvette squad to the lead of the Michelin Endurance Cup – a collection of the four premier long-distance races for the WeatherTech Championship.

The best way to secure the championship is to win the race. Taylor is the one member of the driver trio to accomplish that, having won overall in 2014 and 2018 as part of the Prototype class.

Not that there haven’t been close calls. Corvette Racing has finished second four times and recorded a pair of third-place finishes since 2010. In many of those seasons, the team’s focus was on wrapping up either the American Le Mans Series’ GT championship or the IMSA GT Le Mans (GTLM) title instead of going for outright race wins – 2013, 2016-18 and 2021.

Petit Le Mans sees the end of the first season for Corvette in the new GTD PRO category, and as such is the first at Road Atlanta for the GTD Corvette – which runs with more weight, less power, an anti-lock braking system and a spec Michelin tire compared to the GTLM class. Aside from a win at Sebring in March, the No. 3 Corvette finished second in class at Canadian Tire Motorsport Park and VIR with third-place showings at Long Beach and Road America.

Chevrolet On Display at Road Atlanta

In addition to the many series and events competing during the Petit Le Mans weekend, race fans will have plenty to see and experience from Chevrolet. The Chevrolet Motorsports Display will be full of Chevy vehicles that spectators can learn more about throughout the weekend.

The Chevrolet Motorsports Display opens at 8 a.m. Thursday and Friday plus 8:30 a.m. Saturday and is located in the Fan Zone above the Road Atlanta main paddock. Numerous Chevrolet vehicles and other highlights include:

• An opportunity to receive a 2022 Corvette Racing t-shirt

In addition, a white Chevrolet Corvette Stingray coupe will lead the Petit Le Mans field to the green flag and serve as the official pace car.

ANTONIO GARCIA, NO. 3 MOBIL 1/SiriusXM CHEVROLET CORVETTE C8.R: “It’s both puzzling and frustrating that I haven’t won Petit Le Mans. Of all the big races I’ve done with Corvette, that’s the only one left and I’m reminded of it year after year. The race will be different in many ways so hopefully that’s good for us. Although we are leading the Endurance Cup standings, we are effectively out of the season championship. It’s not a familiar position for us but now we can just go and race for the win this time.

“I’d like to win Petit Le Mans not just for myself but for the team. This has been a very challenging year moving to GTD PRO. It took a lot of work to get the C8.R ready for Daytona. Since then we’ve been in some races and not competitive in others. That’s how it goes with the car we are running. I would say though that the team has worked has hard as it ever has to get whatever results we’ve been able to achieve.”

JORDAN TAYLOR, NO. 3 MOBIL 1/SiriusXM CHEVROLET CORVETTE C8.R: “Petit Le Mans is always a highlight of the year. It brings an amazing crowd and the race itself is always great. I think after our strong showing at VIR and being back in contention for wins, it’s given us a lot of motivation and confidence heading into the weekend. It hasn’t been the easiest year for us. Obviously winning the Sebring 12 Hours was great, but since then we’ve had some tough events. We were able to find a little bit of footing in Canada earlier in the summer, and VIR was the first race in a while where we felt like we could contend. We’re hoping we can keep that up and close this year out on a high.

“I’m fortunate to have won Petit Le Mans multiple times. There are a lot of really good engineers and crew guys on our team – plus Antonio and Nicky – who haven’t won there yet. There has been a lot of effort and preparation put into this race to get them that first win at Petit Le Mans. There wouldn’t be any better way to close this year than Corvette Racing finally winning there.”

NICKY CATSBURG, NO. 3 MOBIL 1/SiriusXM CHEVROLET CORVETTE C8.R: “Honestly this is probably the race everyone wants to win the most! Antonio has never won it and he’s won pretty much every other single event in the States. I’ll add myself to that, especially since last year I didn’t get to drive. For me, this is a big event and one that I want to win. It’s a great event and I’m looking forward to getting back to Corvette Racing. It’s been a long time since I was in the GTD version of the car in March at Sebring, so I’m sure I’ll need some time to get back up to speed. But I can’t wait to be back with the guys and try to win this race.

“This race will be quite a tough one. Road Atlanta doesn’t present the most overtaking opportunities. In the past, there was a clear difference between GTLM and GTD so you had a natural way to overtake. Now every single GTD car you find is potentially just as quick or just a little bit slower than you depending on tire situations. So everything is going to be a fight, plus you have the DPi cars that are so much faster in the high-speed sections. It will be very tough but it’s another reason I love multi-class racing. It’s another aspect where you can make a difference as a driver by being smart in traffic. We will have to stay on our toes the entire time.”

CORVETTE RACING AT MICHELIN RACEWAY ROAD ATLANTA: By the Numbers

• 1: As in one team, one manufacturer and one model of car for 24 years: Corvette Racing, Chevrolet and the Chevrolet Corvette.

• 3: Tracks where Corvette Racing has competed in each of its 24 years: Michelin Raceway Road Atlanta, Sebring International Raceway and WeatherTech Raceway Laguna Seca.

• 10: Number of Road Atlanta victories for Corvette Racing dating back to 2000 – eight of those at Petit Le Mans.

• 10: Petit Le Mans wins for Chevrolet – eight in GT and two in Prototype. That ranks third among manufacturers in event history.

• 14: Manufacturer Championships for Chevrolet and Corvette Racing since 2001

• 122: Victories worldwide for Corvette Racing – 113 in North America, eight at Le Mans and one in the FIA WEC