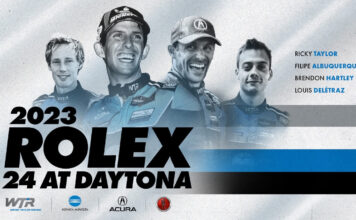 Brownsburg, Ind. (Oct. 3, 2022) — During the first official IMSA sanctioned GTP test at Road Atlanta today, Wayne Taylor Racing announced the drivers who will compete at the 2023 ROLEX 24 At Daytona, an event which will mark an influx of new manufacturers, teams, and drivers into IMSA’s top class for the first race of the IMSA WeatherTech SportsCar Championship GTP era.

Ricky Taylor and Filipe Albuquerque return to full season driving duties in the No. 10 Konica Minolta Acura ARX-06 and will be assisted at the 24-hour endurance battle by Brendon Hartley, who put in a fast and crucial triple stint in the exciting Petit Le Mans season finale. Two-time 2022 IMSA LMP2 race winner, Louis Delétraz, will bring his talents to the team’s three longest endurance races of the year—Daytona, Sebring, and Road Atlanta. Delétraz is coming off a fantastic winning drive at Petit just two days ago. The four pilots will compete behind the wheel of the all-new, electrified ARX-06 with the aim of achieving a record-tying sixth overall victory for Wayne Taylor Racing in the Rolex 24.

Team owner Wayne Taylor is excited to have an impressive lineup for the Rolex 24 at DAYTONA with Ricky Taylor, Filipe Albuquerque, Brendon Hartley and Louis Delétraz.

“We signed up our third driver, Louis Delétraz who will be doing all of our long-distance races, including Daytona,” said team owner Wayne Taylor. “We are also announcing that we’ll run Brendon Hartley again. As far as Daytona’s concerned, I cannot imagine a better lineup than what we have. It’s going to be a hard race. One of those races where you have to make it to the checkered flag to win the race. We’ve won a few of these races—it’s what my team does best, and I just need to make sure that they have all the tools. I couldn’t be happier than having Brendon back and I’ve been watching Louis for a while. He’s got experience. He’s young, but he’s very, very mature and he understands what is needed to be that third driver.

As championship contenders this year, Ricky Taylor and Filipe Albuquerque will be carrying momentum into their third consecutive Rolex 24 as teammates. Dubbed the “best teammates on the grid,” by owner Wayne Taylor, the pair’s chemistry and on-track performance over the past two full seasons will be a boost in their first race with a new Acura chassis.

“I think personalities are so important,” said Ricky Taylor, two-time IMSA champion. “At this level of motorsport, there are more than a handful of drivers who can perform at the highest level, but it seems that meshing compatible drivers together to extract the most out of the entire group seems to be the most important element in endurance racing. We were lucky to find Filipe, as he is an incredible teammate. Brendon is coming off a pole and win at Le Mans, and a stellar performance in our team at Petit Le Mans. As a driver and team member, he’s world class. The same can be said for Louis, who has already gelled with the team amazingly well. Aside from his obvious results and speed, he will be a valuable addition to the crew.

“It is so exciting to see the talent joining the championship for 2023”, Taylor continued. “We must make sure we are fully prepared because it will truly be a test against the best in the world come Daytona. The new LMDh cars are a massive evolution from the current DPi cars. We have no idea how they will race together on track. But, technically, these cars are incredibly well thought out. We have made huge strides and the ARX-06 is a pleasure to drive, but there is a lot of work to be done and hopefully Daytona will prove it to be a winner in race scenarios as well.”

“I’m really happy being teammates with Ricky,” said Filipe Albuquerque. “He’s just a star. Such a complete driver and human being. He is so quick behind the wheel and has won a lot. We’ve been fighting closely for the championship each year, and the partnership is working. It is good to have Brendon as my teammate and with Louis on board for the endurance races, we couldn’t be stronger.“

“It’s an exciting moment in the endurance world” continued Albuquerque. “So many great manufacturers and drivers are incoming and it’s so exciting to watch. Going into this era with more diverse competition means that I’m a lucky guy to be involved with developing a new car with a top manufacturer like Acura and HPD. Merging two series with the possibility of a team bringing a car from IMSA to Le Mans and vice versa, it’s going to be interesting to see the different mentalities on track. Everyone wants to be involved somehow. It’s good for the sport.”

Louis Delétraz, the newest addition to the team come January, is a 25-year-old Swiss open-wheel star and sports car champion. Winner of the 2021 European Le Mans Series title, he is currently competing in the World Endurance Championship, taking home second place honors in the LMP2 class at Le Mans in 2022. His LMP2 resume also includes IMSA experience, with an impressive win at WeatherTech Raceway Laguna Seca this year and a dominant win to end the year at Petit Le Mans. Delétraz is ready to bring his talents to the GTP class in his second consecutive year competing at the Rolex 24.

“This lineup is fantastic,” said Louis Delétraz. “I’m really excited to share the car with such talented drivers. Filipe and Ricky welcomed me to the WTR family straight away and already got me up to speed with everything that’s new ahead of 2023. We get along really well, and they want to win as much as I do. I love that mentality! It’s an honor for me to join WTR and Acura in the pinnacle class of sport cars. After successful years in LMP2 in IMSA and Europe it was my target to be here and I’m very thankful for the opportunity. Joining a team with so much history and success makes the expectations high. I can’t wait to get started.”

Hailing from New Zealand, Brendon Hartley, who is already integrated with the team this weekend, is a three-time overall Le Mans winner, two-time World Endurance Championship title winner and former full-time Formula 1 driver with Scuderia Torro Rosso. He has multiple IMSA podiums on his resume, including an endurance win.

“I have really enjoy working with Filipe and Ricky” said Brendon Hartley. “I know Louis from around the paddock and I know he’s fast but also a good guy. I think we have a strong lineup and a team that knows how to win Daytona! The Rolex is always competitive and it’s a race that I respect a lot. It’s not a race that has been kind to me over the years. It’s going to see all the GTP machinery line up on the grid for the first time and I fully expect that we will be fighting for a good result. The electrified Acura ARX-06 has been put through its paces in testing and I think we have all the ingredients to give ourselves a shot at the victory.”

Long-time partner of Wayne Taylor Racing and the IMSA WeatherTech series, Konica Minolta has been a part of the team’s successful run at Daytona International Speedway for many years and is looking forward to the excitement that the new season brings.

The 2023 Rolex 24 at DAYTONA takes place January 26th-29th at Daytona International Speedway. The qualifying race to set the grid, the Roar Before the Rolex 24, runs on January 22nd. Stay tuned to IMSA and Wayne Taylor Racing’s official social channels for updates on start times, TV viewing and streaming details.
ABOUT KONICA MINOLTA