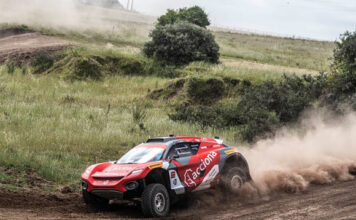 ACCIONA | SAINZ XE Team set the pace in the Uruguay Natural Energy X Prix, finishing top of the timesheets in a dramatic Qualifying 1 that saw rolls for two of the championship contenders.

26 November 2022, Uruguay: Laia Sanz and Carlos Sainz Snr. topped the timesheets with a time of 10:14.120 in a nail-biting first session which saw the top five teams separated by just 2.606 seconds.

Laia Sanz, ACCIONA | SAINZ XE Team, said: “We are happy. This track is quite tight, as we can see with the times, and I think it will be like this all the weekend.

“It won’t be easy to get those five championship points from the Continental Traction Challenge in the next session, as when we are racing with more cars it will be really tough to improve the times. We will see though – anything can happen.”

Championship leaders Rosberg X Racing (RXR) and nearest challengers X44 Vida Carbon Racing both suffered setbacks in their title chase, as rolls for Mikaela Åhlin-Kottulinksy and Cristina Gutiérrez leaves their teams with plenty of work ahead of Q2.

There was a total of three red flags in the session, with a similar incident for JBXE’s Hedda Hosås as the drivers found the limits of the three-kilometre course in Punta del Este.

A new driver line-up propelled Veloce Racing to second in the Q1 standings. Molly Taylor and Kevin Hansen temporarily topped the timesheets in their debuts for the team but were pipped at the post by just 0.563 seconds.

No.99 GMC HUMMER EV Chip Ganassi Racing were third, stealing a spot in the top three from ABT CUPRA XE who finished 0.219 seconds behind the American team despite a five-second time penalty for a Switch Zone infringement. Genesys Andretti United Extreme E maintained their strong start to proceedings in Uruguay as they rounded out the quick top five.

Slightly further adrift in sixth were NEOM McLaren Extreme E, who completed a clean run after a roll in Free Practice for Emma Gilmour, while in seventh were XITE ENERGY Racing as just 16.043 seconds separated the seven finishing teams.

It could not be much closer as the teams head into the second session, and with Qualifying 2 fast approaching find out where you can watch the action here.

Kevin Hansen, Veloce Racing, said: We have a good car, I was very comfortable with it out there. The team has done a fantastic job on the set up, I really enjoyed driving it and I tried not to take too much of a risk as I had seen other teams having a bit of an issue.”

Mikaeala Åhlin-Kottulinksy, Rosberg X Racing, said: “I came up and had too much weight on the outer wheel and just rolled. Hopefully our car should be ready for Q2, and timing wise we were fine, so we take the good parts with us, make some changes, and work from there.”

Sébastien Loeb, X44 Vida Carbon Racing, said: “We’ve seen three of the cars on the track roll, so I think the grip is too high for our centre of gravity and if you want to push in the corner, you roll.
“I saw Cristina’s roll from afar and saw the car jumping around so there could be some damage. We will see if we are okay to go out in Q2 – let’s hope so.”

Hedda Hosås, JBXE, said: “Of course, it’s not the way we wanted the weekend to start. I think there was a small bump, and it’s hard to save that when you’re going uphill. We’re going to look at the onboard and study what happened properly. The team is working really hard so we should be fine.”