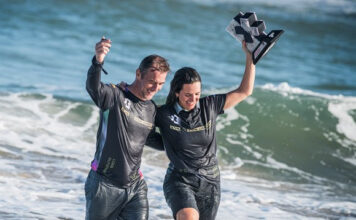 After narrowly missing out on title glory in Extreme E’s inaugural campaign, X44 Vida Carbon Racing entered Season 2 on a mission to win. Despite tough competition from RXR and some setbacks, they brilliantly delivered at the Uruguay Naturals Energy X Prix, claiming third place to secure their maiden Extreme E Championship title in a nail-biting final round.

How did they do it? We caught up with the X44’s leading players to find out.

Lewis Hamilton’s X44 team entered the 2022 season hungry for redemption after being denied championship glory in Season 1, due to having fewer X Prix victories than RXR over the course of the campaign. Season 2 was the opportunity to turn the tides.

At the season-opener in NEOM, Saudi Arabia, X44 Vida Carbon Racing laid down the gauntlet by securing first place in Qualifying, as well as progression through to the Desert X Prix Final.

However, despite flashes of speed, Sunday afternoon brought the team less reward. After Kristoffersson and Sanz pulled brilliant Final laps, securing P1 and P2 for RXR and ACCIONA | SAINZ XE Team, respectively, Sébastien Loeb and Cristina Gutiérrez could only secure third spot on the podium.

X44 Vida Carbon Racing met similar misfortune during the second round of the season in Sardinia. Here, a difficult start ensured that the NEOM Island X Prix I was the first event that didn’t have Sébastien Loeb and Cristina Gutiérrez competing in the Final.

While Saturday’s Qualifying 1 was tricky for the team, with Loeb even helping to change a tyre in the Switch Zone, Q2 showed promise. Here, a masterclass from Loeb saw the team gain two track positions in the five-car Heat, claiming third in Qualifying overall.

The main troubles of the weekend struck on Sunday, with a struggle to set-off after the driver switch in Semi Final 2. Gutiérrez was unable to close the subsequent gap and the team fell short of a place in the Final, ending the X Prix in sixth.

In Qualifying 2, Loeb and Gutiérrez picked up the chase, competing with RXR for that elusive top spot. Although the team picked up a 15-second penalty for leaving the Switch Zone too soon, their impressive pace they retained second place overall and proceeded to Semi-Final 2.

It seemed the NEOM Island X Prix II had finally delivered the whole package for X44 Vida Carbon Racing. In the Final, their pace was strong enough to claim second and their best result of the season to date. This meant the team entered the closing stages of the season on the coattails of the top three, just one point behind ACCIONA | SAINZ XE Team in third.

In September, X44 Vida Carbon Racing finally produced a result that reflected their promise, claiming their first race victory of the season in Antofagasta, Chile.

The success of the weekend began on Saturday, with the team placing second in Qualifying overall. The team carried that momentum into Q2, where Loeb and Gutiérrez managed to secure their spot in Semi-Final 2, despite collecting a 10-second penalty for driving through a waypoint flag.

In Sunday’s Final, a dramatic turn of events saw multiple penalties accrued for X44 Vida Carbon Racing’s competitors, making way for Loeb and Gutiérrez to claim the top step of the podium.

As a result, Lewis Hamilton’s team successfully propelled themselves into the championship picture. Sitting only 17 points behind RXR going into the final X Prix weekend, the battle for the championship was in full swing.

Despite the momentum from their victory at the Antofagasta Minerals Copper X Prix, X44 Vida Carbon Racing didn’t get the start they needed in Uruguay, as crash for Gutiérrez in Q1 put the team on the backfoot.

Alongside the DNF, the team were forced to use the championship car in place of their damaged ODYSSEY 21. Adding to the struggles of adapting to a new machine, the replacement incurred a five-second penalty that would later be served in the Crazy Race.

Loeb said: “When we used the second car it was the first time, we have ever changed the chassis. We had to get used to the car, it wasn’t working exactly like ours. The seat position, the pedals, everything was wrong, so we had to adapt in Q2 to try to get used to it. In the night, the team did a great job adjusting the car to make it more like the old car, so it felt a lot better for Finals Day.”

With the odds stacked against them, Loeb took a gamble and dropped to the back of the field in his Q2 Heat. This gave the Frenchman the clean air he needed to take on the Continental Traction Challenge, and Loeb’s bold tactics paid off. The team stormed to a time half a second quicker than the nearest challengers in the sector, earning five points that proved crucial come Finals Day.

This switched-on thinking came with its risks, as the team sealed their fate with a spot in the Crazy Racing alongside championship leaders RXR – a first for both teams as the title came down a wheel-to-wheel battle between the top two. X44 Vida Carbon Racing came out on top to take the fifth spot the Final, while RXR were disqualified for using too many engineers in the Switch Zone as they tried to get their damaged ODYSSEY 21 back out on course for crucial points.

The stakes were high, as Lewis Hamilton’s outfit needing at least third place in the Final to snatch the championship, and from the outset it was clear that it would be no easy task for X44 Vida Carbon Racing as Loeb slotted into fourth on his stint.

This was the lifeline that Gutiérrez needed, and the Spaniard crossed the line within two seconds of Munnings, thus securing third place and the championship title for X44 Vida Carbon Racing, just two points clear of RXR.

Gutiérrez said: “I still can’t believe it! It was a very tough weekend for us, especially after my roll yesterday. The team did a crazy job with the (spare) car and Qualifying 2 was the first time we had driven it.

“As for the Final, on the radio they told me someone was going to be penalised but still I didn’t know. I wanted to be sure that we won so I did not celebrate before it was official. It was a rollercoaster, but it is much better than that for us as we can now believe in what we have achieved.”