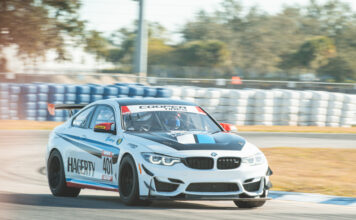 Austin, Texas (28 November 2022) – The World Racing League (WRL) powered by Hagerty heads to Austin, Texas for the final round of the 2022 season at Circuit of The Americas (COTA) this weekend. The December 2nd – 4th event will feature the final two eight hour races of the season to determine several championship standings, with R3R looking to emerge with three titles to close out the year.

Round 3 Racing (R3R) goes into the weekend with the positive momentum of a five-win weekend the last time out at Sebring International Raceway.

Brad McCall, Sarah Montgomery, and Cole Loftsgard will team up one last time to end the season in the Hagerty Motorsports BMW M4 GT4. The team has qualified on pole for six consecutive race weekends and will be aiming to add another in Texas. McCall, Montgomery, and Loftsgard have earned wins at Barber Motorsports Park, Michelin Raceway Road Atlanta, and Sebring, alongside additional podiums at Mid-Ohio Sports Car Course and Sebring. Currently, the team sits fourth in the national points standings.

Although last year’s race at COTA was the debut for the No. 401 BMW, the team was quickly in a competitive position, with Montgomery qualifying second for Race 1. Her qualifying effort put her on the front row, next to NASCAR driver Austin Dillon.

“My team and I have had a pretty great year this 2022 season,” said Montgomery. “We had our first outing in the BMW at this race last year and were able to get some of the kinks out before starting this season. I hope to finish the year with another great race full of trophies and great times with friends.”

The No. 701 Porsche Cayman will feature a new driver lineup this week as returning drivers Loni Unser and Sabré Cook are joined by Brian Ghidinelli – who has spent the season behind the wheel of the No. 609 Sentinel BMW. The Cooper Tires team looks to continue their momentum as they are coming off back-to-back wins at Sebring. The team currently leads the GP1 national championship after claiming two wins and three podiums at Barber, Road America, and VIRginia International Raceway which have led them to this point.

During the 2021 season finale at COTA, Unser and the Cooper Tires team swept the weekend, earning wins on both days. The weekend marked the first time the team had won two races back-to-back. Though they finished the season fourth in the national points standings, the team knew they would be back to challenge for the championship this year.

“I’m so excited to have support from Hagerty and Shift Up Now to do my second race with Round 3 Racing,” said Cook. “Everyone at Round 3 is such a pleasure to work with and COTA is always a fun and beautiful place to race, so I’m certainly looking forward to it.The team and I had great success with our wins at Sebring so we will focus on fighting for that top step again!”

Looking to make a strong season finish, Carter Pease, Dennis Neel, Hannah Grisham, and Buz McCall will team up one last time for the season at COTA. The Hagerty Drivers Club team is coming off a double win at Sebring alongside the Cooper Tires team. Despite not starting the season until three races were completed, the Porsche Boxster has earned six wins so far, in addition to two podium finishes at Daytona International Raceway and VIR. Sitting just fourteen points behind the leader in third place, the team is in contention for winning the national championship for a second year in a row.

Last season at COTA, the Hagerty Drivers Club team earned a second-place finish followed by a fifth-place finish in the GP3 class. The results gave the team enough points to clinch the national championship.

“I am very excited for the last WRL race of the season in the Hagerty Drivers Club Porsche Boxster with Round 3 Racing,” said Grisham. “It is going to be a tense weekend fighting for the national championship. I think we can bring it home, we just need a clean weekend and strong stints! I can’t thank the McCalls, Hagerty and Shift Up Now enough for helping me stay in a car this season!”

The national championship weekend will begin with qualifying and practice on Friday, December 2nd, followed by two eight-hour races on Saturday and Sunday. Hagerty will host a Cars and Caffeine event Saturday, December 3rd, before the green flag. Hagerty Drivers Club members are welcome to stay for the race and watch as the 90-car field battles on the F1 track.