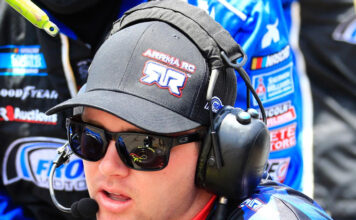 Dylan Cappello Ready for Busy Week in Nashville and Pensacola

MOORESVILLE, N.C. (November 29, 2022) – Dylan Cappello, the championship-winning lead race engineer for Front Row Motorsports (FRM) and its No. 38 truck team, will have no time to waste this week. Cappello, 26, put his name on the entry list for this weekend’s Snowflake 100 at Five Flags Speedway in Pensacola, Florida knowing that he may be in Nashville celebrating a championship with Zane Smith and the rest of his FRM teammates.

With Smith securing the championship earlier this month in Phoenix, it put the plan in place for Cappello to fly from Nashville to Pensacola, with other members of the truck team, to try and race for a win in the prestigious 100-lap pro-late model event. Although it will make for a hectic schedule, Cappello is excited to get behind the wheel of his late model.

“It will certainly be a busy week with the Championship Awards in Nashville and then immediately flying to Florida to qualify and race,” said Cappello. “But I would not want it any other way. We all worked so hard this year to win the championship and it will be fun to celebrate in Nashville. I’m going to miss practice, but I know that we’ll be ready to qualify. It’s just going to be a really fun week and we’re all ready to get it started.”

Cappello is no stranger to success behind the wheel of a pro late model. In limited starts, he has three wins including the 2022 All-Star Showdown at Irwindale (Calif.) Speedway earlier this year. The one advantage Cappello knows he has going for him this weekend is the interest of his team at the track and at home. That includes Smith who will be watching.

“For sure, I’ll be watching Dylan,” said Smith, driver of the No. 38 Ford F-150. “He has been a crucial part to this No. 38 team’s championship success, so it is only fitting that we root for him this weekend. He’s not only a great engineer and teammate, but also a great racer. It’s cool when guys on your team race, too. I’ll be tuned in and we all wish him luck.”

Cappello will hit the track for the Snowflake 100 on Saturday with coverage beginning at 2 p.m. ET on RacingAmerica.tv, click here to find out more information on the PPV broadcast.