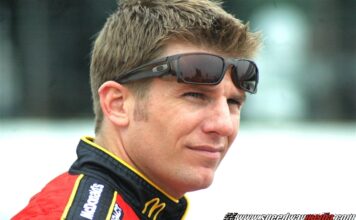 Daytona 500 champion Jamie McMurray celebrated his victory with a true taste of Northern California in San Francisco on Wednesday, complete with Dungeness crab, world-class chocolates and a bottle of Sonoma Valley wine.

McMurray (No. 1 Bass Pro Shops/Tracker Boats Chevrolet) took the checkered flag in the Great American Race on Sunday, and arrived in the Bay Area just three days later for a San Francisco Victory Tour onboard a motorized cable car led by a California Highway Patrol escort.

McMurray and his wife, Christy, enjoyed a one-of-a-kind tour of San Francisco, crossing the historic Golden Gate Bridge and visiting Grotto #9 at Fisherman’s Wharf. McMurray learned how to crack a Dungeness crab under the guidance of co-owner Anthony Geraldi.

The tour continued to Ghirardelli Square where the McMurrays received a basket of gourmet chocolates and were treated to ice cream sundaes.

The cable car ride culminated at Willie Mays Plaza, at the home of the San Francisco Giants, where McMurray greeted race fans and the Northern California media.

Giants Vice President Russ Stanley presented McMurray with an official team jersey, complete with his name and car number on the back.

“I have to say, New York was cool, but San Francisco has been awesome,” said McMurray after the tour. “The weather is beautiful and it’s so great to see the fans come out here. As a driver, you can’t imagine what this means to me. It’s been wonderful.”

“What great representatives Jamie and Christy are for the sport,” said Page. “It’s terrific to have someone who is a great road racer and has a good history at our track win the Daytona 500. We’re really excited to see him back in Sonoma in June.”

Fans joined the Victory Tour onboard a fan-only cable car, which followed McMurray’s lead cable car on its celebratory route. The fans purchased seats on the tour as part of a special ticket package offered by the raceway, which included a weekend ticket to the Toyota/Save Mart 350.

“We’ve been to every race at Infineon Raceway, and my husband loves it,” said Angelina Valdez, from San Francisco. “This is the second year we’ve attended the fan rally at Willie Mays Plaza, and it’s just so cool to see NASCAR in the city.”