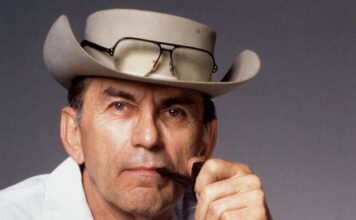 When we take a look back at the beginnings of NASCAR, we often focus on the legendary drivers who became the stars of the sport. But if we stop there, we’ve really only scratched the surface.

You can’t really understand NASCAR without taking a look at the talent behind the scenes.

Smokey Yunick is a perfect place to start, but be forewarned. It’s sometimes difficult to distinguish between fact and fiction when discussing this colorful character.

Yunick was involved in all aspects of racing from designer to driver but is most well-known as a mechanic, builder and crew chief. His innovations led to at least eleven patents.

Yunick was also quite famous for his ability to walk that fine line between bending and breaking the rules.

He was a familiar sight at the track and easy to spot with his trademark white uniform, cowboy hat and corncob pipe.

Henry “Smokey” Yunick was born in 1923 and grew up on a farm in Pennsylvania.  He dropped out of school at the age of sixteen after the death of his father.

Yunick spent his days working on the farm but built and raced motorcycles in his spare time.  When a fellow competitor couldn’t remember his name, he called him “Smokey,” because the motorcycle Yunick was driving had an engine that smoked.  The name stuck.

In 1941, when World War II broke out, Yunick joined the Army Air Corps and piloted a B-17 Flying Fortress.  After the war, he married and moved to Daytona Beach, Florida.

After the war, he opened a garage called “The Best Damn Garage in Town.” He ran the garage for thirty years, closing it in 1987.

Yunick’s career in NASCAR began when he was approached by Marshall Teague, a local stock car team owner, who invited Yunick to join his team. Although he had never worked on stock cars, Yunick accepted the job.

He was the chief mechanic for Herb Thomas who won the Winston Cup championship in 1951 and 1953. Yunick had 61 starts as a car owner and earned eight career victories. He won more than 50 times as a crew chief, chief mechanic or engine builder.

But that’s only the beginning of Yunick’s story.

Yunick was also deeply involved in Indianapolis 500 racing and was responsible for numerous innovations. In 1959, Yunick brought a car with the engine turned upside down, calling it the Reverse Torque Special. The car finished in seventh place. He won the Indy 500 in 1960 with driver Jim Rathmann.

In 1962, he changed open wheel racing forever when he mounted a wing on Jim Rathmann’s Roadster. The wing was designed to increase downforce and it allowed Rathmann to reach cornering speeds never before seen at Indianapolis Motor Speedway.

One of the most unusual cars he brought to the Indy 500 was his “sidesaddle” car, that he called the Hurst Floor Shift Special. The car was driven by Bobby Johns and according to Yunick was “built out of backyard kind of stuff.”

By the end of his career, Yunick had worked with many of the most famous drivers in the racing community. The list includes Tim Flock, Mario Andretti, A.J. Foyt, Curtis Turner, Buck Baker, Herb Thomas and Fireball Roberts, just to name a few.

Yunick’s career brought him to the attention of the automotive industry and he became Chevrolet’s unofficial factory race team. This collaboration involved him in the design and testing of the Chevrolet Small-Block engine.

He was also the first to put a driver on the pole three times (1960-1962) with his close friend, Fireball Roberts. After Robert’s death in 1964, Yunick began a campaign for safety modifications to prevent a repeat of the accident.

He was repeatedly overruled by NASCAR owner, Bill France Sr. Tired of what he called the “politics” of racing, Yunick left NASCAR in 1970.

He continued to apply his expertise in the racing community through a variety of projects over the next fifteen years. Yunick helped develop a stock-block pushrod engine for the Indy 500, worked on developing a high performance Buick V-6 engine and numerous other endeavors.

Over the last few years of his life, he was involved in everything from exploring numerous alternative energy sources to writing a column for Circle Track magazine. When he found out he had leukemia, he focused on completing his autobiography.

With all that he accomplished, one of the most fascinating aspects of Yunick’s life was his ability to find the grey areas in NASCAR’s rules.

The most infamous example of his ingenuity occurred in 1968 during Speed Week when NASCAR officials pulled the gas tank out of Yunick’s Pontiac after they thought his car was getting excessive fuel mileage.

After the inspection was over, Yunick got into the car, started it up and drove away… with the gas tank still lying on the ground.

Bobby Allison, who had driven a couple of Yunick’s cars, explained what happened.

“Smokey looked and saw where the NASCAR rule book wouldn’t define something and he’d make his own improvisations.”

“The gas tank was the right size but he made the fuel line so it held a couple of gallons of gas. So he was able to drive away without the gas tank. I don’t want to say he didn’t step outside the lines, but he was really smart about those things.”

I could recount story after story of the many ways that Yunick found to beat the system. But what I find most interesting is not the how, but the why.

In November 1988, in Circle Track Magazine, Yunick gave us insight into how his mind worked.

“Trying to figure out NASCAR’s rule book threw me at first. Then, after studying the rules from all sides, I realized I’d made a colossal mistake,” he said.

“I’d been reading the rule book to see what it said. And all along what I should have been doing was finding out what it didn’t say. After I started doing that, racing became fun in a big way.”

His love of life and thirst for knowledge left a legacy that will continue to impact future generations in the world or racing. Just as importantly, he had fun doing it.

Smokey was quite a character,” said Tony George, former president of Indianapolis Motor Speedway. “That’s what racing needs today, more characters. He will be missed.”

“He never wanted for words, whether it was a cuss word or a nice word,” said Ray Fox, who worked with Yunick in the 1950’s. “He was one heck of a guy.”

Ray Evernham summed up the loss simply, saying, “We’ve lost one of the greatest mechanics to ever work in our sport.”

As a tribute to her husband’s zest for life and his love of racing, Yunick’s wife, Margie, paid tribute to him in her own unique way. She scattered part of his cremated remains in a few different victory lanes on the racing circuit.

I can’t think of any place he’d rather be.

Angela Campbell
A native of Charlotte, NC, Angela (Angie) was first introduced to racing by her father. An avid fan of NASCAR, she found a way to combine her love of racing with her passion for writing. Angie is also an award-winning member of the National Motorsports Press Association. Follow her on Twitter @angiecampbell_ for the latest NASCAR news and feature stories.
Previous articleBusch wins the NNS Tech-Net Auto Service 300 at Charlotte
Next articleJohnson wins Gillette Fusion ProGlide Prelude to the Dream charity event