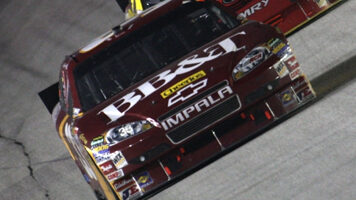 So, what did we learn at Atlanta?

Well, we learned that Clint Bowyer doesn’t fight fair. You got all those boys waiting for him to crash so they might catch him for the final Chase place, and what does he do? He rides around just outside the top ten and finishes seventh. That lad has no sense of drama.

We learned that if Richmond is going to provide any excitement in the standings, Bowyer will need to beat Joe Nemechek back to the garage to open up the door. What are the odds of that happening? As it is, if Bowyer finishes 39th Saturday night, Mark Martin is done. 31st puts Jamie McMurray to bed, while 28th is all it will take to eliminate Ryan Newman. It is at least a hope, which is more than what Greg Biffle gave them. All he needs to do is start at Richmond and he is in.

We learned that Kasey Kahne is a brave man. Am I the only one who notices that Newman does not have a neck? You don’t kick sand in his face, or he might remove your own. The good news was that he was smiling when he had his post-race chat with Kahne. Then again, I remember that Carl Edwards was smiling, albeit in demented fashion, when he was doing his Muhammad Ali impersonation around Matt Kenseth a few years back. Maybe a smile isn’t a good sign, after all.

We learned that Newman’s boss, Tony Stewart, had the best car last Sunday. Smoke picked up his 38th career win and now has at least one victory in each of his dozen Cup seasons. In Chase parlance, he is currently just 40 points behind the leaders that matter, Jimmie Johnson and Denny Hamlin.

We learned that Hamlin had the second best car at Atlanta. Then it blew up and finished dead last. Yes, even behind Nemechek. So, if it can happen to Denny, it could happen to Clint. Maybe there is cause to retain some hope.

We learned that there is something special about those Busch boys. Sure, there are times you want to beat them with clubs, but they can sure drive. Kyle speeds through the pits, gets penalized, then drops by twenty laps later with a loose wheel to find himself down a circuit in 36th. He would finish fifth. Kurt had a car that was junk most of the day, saved both himself and Kahne in the late going, and still wound up sixth.

We learned that Rusty Wallace can make us laugh. No, really. Johnson goes by Juan Pablo Montoya, a single digit waving in the breeze toward the Columbian. Rusty, with tongue firmly planted in cheek, commented that when Johnson went sideways the wind must have “sucked his hand out of the window.” That, my friends, is comedy. Now we want more.

It was quite a week. Stewart wins at Atlanta, Manny joins the White Sox, and the Eskimos beat the Stampeders in their Labor day football tilt in the CFL. Okay, Calgary actually crushed Edmonton 52-5, but one needs to keep the faith even when there really is no justification for doing so. Just ask Mark, Jamie, and Ryan as they head to Richmond for this Saturday night. Enjoy your week.

Ron Thornton
A former radio and television broadcaster, newspaper columnist, Little League baseball coach, Ron Thornton has been following NASCAR on this site since 2004. While his focus may have changed over recent years, he continues to make periodic appearances only when he has something to say. That makes him a rather unique journalist.
Previous article
Surprising and Not Surprising: Atlanta’s Emory Healthcare 500
Next article
Hot 20 over the past 10 – RCR has 3 of the best heading to Richmond