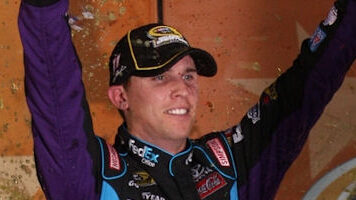 The Air Guard 400 from Richmond International Raceway was mixture of pride and prestige as NASCAR honored not only the 9th anniversary of the 9-11 tragedy but also the brave men and women of our armed forces and first responders to the horrific scenes of that horrible day.

There were only three cautions throughout the evening the last of which for weather, however not even the brief rain shower would detour the determined teams as they battled to run the final race before the chase to conclusion.

As the night raged on and the laps wound down the battling giants of NASCAR boiled down to the clash of the Richmond Titans. Kyle Busch, whose record at RIR has done nothing but improve, battled “Hometown Hero” Denny Hamlin for the top spot. Hamlin dodged the Busch bullet as the No 18 car began to give up the fight despite the driver determination.

As the checkered flag flew the crowd at RIR came to life as Virginia’s own Denny Hamlin claimed not only the victory but also the points lead to start the “Chase”.

Second place finisher Kyle Busch reflected on the closing moments of the race. “I felt like the 11 car was just ahead of us tonight and they deserved to win.” Busch said. Later he added, “We can’t be disappointed in a second tonight. We wanted to win, and we fought hard with Denny, but racing teammates clean like that, and not laying a bumper at all, just making sure that the Gibbs cars had a good, solid night, so that everything would be on our side heading into the chase next weekend. Hamlin praised the efforts of his team and his Gibbs racing teammates post race.

“Kyle (Busch) put the pressure on us and he made a heck of a charge.” Hamlin said, about the closing laps. “Luckily for me he was a teammate because if it had been anyone else, he probably would have moved us.” “Really proud of Joey (Logano),” Hamlin later said. “It’s only a matter of time before he’s as competitive as Kyle Busch week-in and week-out, and that’s going to make both teams a whole lot stronger.”

“Just a big deal for us. I think with Denny and Kyle as well, and to watch Joey, all three in one night hopefully get some momentum built up for the Chase was a big deal for Joe Gibbs Racing, and we love coming back to Richmond.”

TO READ OUR LAP-BY-LAP COVERAGE, CLICK THE LINK BELOW