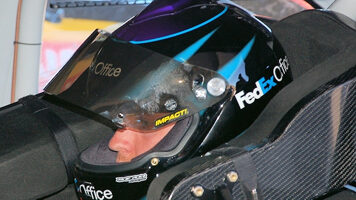 1. Denny Hamlin: Hamlin led 251 of 400 laps at Richmond, erasing the memory of 34th and 43rd-place finishes in his last two races to grab the top seed in the Chase For The Cup. Hamlin’s sixth win of the year places him ten points ahead of four-time defending champion Jimmie Johnson, with five wins.

“The No. 11 Joe Gibbs Camry was awesome on Saturday night,” Hamlin said. “There were a lot of people who doubted out ability to get this car ready for the Chase. Well, if the Fed Ex Office car could talk, it would undoubtedly tell those people to ‘kiss my asterisk.’”

2. Jimmie Johnson: Johnson finished third in the Air Guard 400, sandwiched among three Joe Gibbs Racing cars that finished first, second, and fourth. It was Johnson’s tenth top-5 finish of the year, and he will start the Chase seeded second, ten points behind Denny Hamlin.

“We may not be leading the standings right now,” Johnson said, “but with two consecutive third-place finishes, we will be there soon. In this business, timing is everything, and as a four-time champion, our ‘time-ing’ is best.”

“And speaking of time, do you know what time it is? I’ll tell you. It’s ten until five—–ten races until I’m crowned with my fifth Sprint Cup title. It’s only a matter of time.”

3. Kevin Harvick: Harvick finished ninth at Richmond, his series-best 17th top-10 result of the year. However, Harvick’s sizeable points lead is gone, and as a result of the points reset, he’ll start the Chase For The Cup 30 points down to Denny Hamlin.

“There’s good news and bad news,” Harvick said. “The bad news is my 228-point lead is gone. The good news? There’s something that can disappear faster than a 228-point lead, and that’s a 30 point lead.”

4. Kyle Busch: After a poor qualifying effort, Busch started 32nd in the Air Guard 400, but quickly made his way to the front. Busch was in the top 10 on lap 136, and soon after hit the top 5. He later dueled teammate Denny Hamlin for the lead in the closing laps, but was unable to overtake the No. 11 Toyota.

“The No. 18 M&M’s Toyota was fast enough to win,” Busch said, “but I just used up too much of the car trying to get close to Hamlin, which, incidentally, is the only way I would ever even consider ‘getting close’ to him.”

Anyway, they say ‘M&M’s melt in your mouth, not in your hands.’ Well, the way I drove it, the tires of the M&M’s car melted on the track, and in my hands.”

5. Carl Edwards: Edwards continued his hot streak, starting from the pole at Richmond and leading 95 laps on his way to a tenth-place finish. Edwards, in the No. 99 Cheez-It Ford, scored his 14th top 10 of the year, and eight in his last nine races, to enter the Chase as the most dangerous driver without a win.

“I suggest other drivers take me seriously as a contender for the Cup,” Edwards said. “And other drivers suggested that to be taken seriously, I should try something besides ‘Cheez-it’ on my car.”

6. Tony Stewart: After winning last week at Atlanta, Stewart closed the regular season with a 16th at Richmond, losing some of the momentum built by his lone victory this year. He will start the Chase 50 points down to Denny Hamlin.

“My win at Atlanta,” Stewart said, “was a ‘Smoke’ signal that I would be a factor in the Chase. If that’s the case, then my 16th at Richmond could portend that the Chase will likely see barely a puff of ‘Smoke.’”

7. Kurt Busch: Already locked into the Chase, Busch and the No. 2 Miller Lite team went for the win, making some changes to the car that didn’t pan out. Loose-handling issues arose, and Busch struggled to an 18th-place finish. Busch will start the Chase with 5,020 points, 40 behind Denny Hamlin.

“As you know,” Busch said, “I won the inaugural Chase back in 2004. It’s true what they say—becoming the Sprint Cup champion does change your life. Look at me. Without a title hence, I haven’t been the same since.”

8. Jeff Gordon: Gordon finished a respectable 12th at Richmond, but with no wins this year, will start the Chase For The Cup a disappointing 60 points down. Gordon has now gone 55 races without a win.

“As an eternal optimist, I look at 55 races without a win as consistency. And consistency, not wins, is the key to success in the Chase. Ten more consistent races, and I could be Sprint Cup champion for the fifth time, which I believe would equal the number of failed Van Halen reunions.”

9. Clint Bowyer: Needing only a finish of 28th or better to clinch a Chase berth, Bowyer easily punched his ticket with a sixth at Richmond, posting his 14th top-10 finish of the year. The Richard Childress Racing driver will start the Chase For The Cup 60 points behind top seed Denny Hamlin.

“I think I speak for all five Chase qualifiers without a win,” Bowyer said, “when I say that a 60 point deficit is a pretty good deal considering. A 60 point deficit accumulated over 26 races is nothing. Give me ten races, and I can knock 60 points out easily. So, in essence, the five of us can win for losing.”

10. Greg Biffle: Biffle finished 32nd at Richmond, one week after coming home 36th at Atlanta, clinching his spot in the Chase, albeit under disappointing circumstances. He’ll start his quest for the Sprint Cup 50 points behind Denny Hamlin.

“I’m just glad to be back in the Chase,” Biffle said. “And ‘back’ is the operative word, because we certainly ‘backed’ our way into it.”

But there are three Roush Fenway drivers in the Chase, two you may have heard about, and Matt Kenseth.”

Jeffrey Boswell
Previous articleA Chase for Some, An Audition for Others
Next articleJason White Looking Forward to Loudon