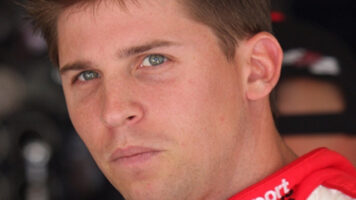 1. Denny Hamlin: Hamlin finished ninth at Dover, well ahead of new rival Kevin Harvick, in 15th, and Harvick’s Richard Childress Racing sidekick Clint Bowyer, in 25th. In a controversy-filled weekend, Hamlin criticized Bowyer on Friday, then was tormented by Harvick in Saturday’s practice. Hamlin maintained the lead in the Sprint Cup point standings, and holds a 45 point edge over Harvick.

“I stand by my assertion that RCR got what was coming to them,” Hamlin said. “It seems the Hamburger Helper ‘hand’ was caught in the cookie jar. I guess NASCAR officials (four)-fingered the No. 33 car for a violation.”

2. Jimmie Johnson: Johnson dominated at Dover, leading 191 of 400 laps to take victory in the AAA 400 and authoritatively re-establish himself as the Sprint Cup favorite. Johnson started from the pole and took over midway through the race, and jumped four places in the point standings. He trails Denny Hamlin by 92 points.

“The ‘Drive For Five’ is alive,” Johnson said. “And well. This is the start of something big for us, and that’s bad news for any other driver aspiring to be the champ. The forecast calls for ‘reigning,’ on their parades.

Nothing says ‘I’m back’ like a convincing win, and nothing portends more good things for me like a budding feud between the two teams that likely employ the driver that could potentially unseat me.”

3. Kyle Busch: Busch survived a brush with the wall at Dover to post a sixth in the AAA 400, giving Joe Gibbs Racing three cars in the top 10. Busch is now third in the Sprint Cup point standings, and trails teammate Denny Hamlin by 62 points.

“That’s the best I can do in defense of Hamlin’s run-ins with Richard Childress Racing,” said Busch. “Hamlin may not like what Kevin Harvick did to him, but I bet he’d love to have a teammate that would do that for him.”

4. Kevin Harvick: One day after tangling with Denny Hamlin in practice, Harvick finished 15th at Dover, a result that certainly supported the contention that RCR is not cheating. However, Harvick gained a spot in the point standings, and now trails Hamlin by 45.

“I don’t take kindly to drivers criticizing the actions of Richard Childress Racing,” Harvick said. “And I don’t waste time letting them know how I feel. ‘RCR’ can also stand for ‘Retribution Comes Rapidly.’”

5. Carl Edwards: On one of his favorite tracks, Edwards posted a fifth at Dover’s “Monster Mile,” scoring his seventh top 5 of the year and trimming 22 points from points leader Denny Hamlin’s lead. Edwards is in sixth, 73 points back.

“I support Denny Hamlin speaking his mind,” Edwards said, “and I support Kevin Harvick defending his teammate. In Harvick’s case, I’m not sure I would do the same for one of my Roush Fenway teammates. Heck, I have enough trouble defending my honor, much less someone else’s.

6. Kurt Busch: Busch finished fourth in the AAA 400 at Dover, his ninth top 5 of the year, and closed to within 59 points of Sprint Cup points leader Denny Hamlin.

“All this controversy,” Busch said, “and I’m not involved in it. You could say ‘Something is wrong with this picture,’ which is exactly what I said to my cosmetic surgeon after handing him my mug shot. Then, he proceeded to downsize my ears, and trust me, he took more than .006 of an inch off of them.”

7. Jeff Burton: Burton raced to his second runner-up finish of the year, chasing Jimmie Johnson to the line at Dover to lead the Richard Childress Racing contingent.

“In light of Clint Bowyer’s plight,” Burton said, “I think it was important to finish well at Dover, and we did that. The No. 33 team says they did nothing wrong, and I believe them. NASCAR claims Bowyer’s car was .006 beyond the tolerance. That’s an incredibly low amount of tolerance. Who has tolerance even lower than NASCAR’s? Kevin Harvick, that’s who. He’ll ‘go off’ at the drop of a hat, or the drop of the green flag for practice.”

8. Jeff Gordon: Gordon saw a potential top-5 run derailed by a slow pit stop during the final caution at Dover and finished 11th. He hasn’t posted a top-5 finish since Chicagoland, and is still winless in his last 57 races. Gordon is eighth in the point standings, 83 behind Denny Hamlin.

“My four Sprint Cup championships are a testament to being great,” Gordon said. “But right now, I’d happily settle for being merely good.”

9. Clint Bowyer: Just days after a rules violation dropped him from second to 12th in the points standings, Bowyer finished a disappointing 25th at Dover. He is now 235 points behind Denny Hamlin, who vocally supported NASCAR’s decision to penalize Bowyer.

“I have to thank my teammates for their support,” Bowyer said, “especially Kevin Harvick. Kevin took it upon himself to distribute his own brand of justice when he buzzed Hamlin in practice. As you can see, Kevin’s desire to ‘play God’ is matched by my desire to ‘play dumb.’”

10. Tony Stewart: Stewart finished 21st in the AAA 400, doomed early in the race when a pit road speeding penalty knocked him two laps down. He now sits in tenth place in the Sprint Cup point standings, 162 behind Denny Hamlin.

“I haven’t failed many inspections,” Stewart said, “but I have failed several physicals. Of course, none of my teammates ever felt compelled to go after other drivers that may have spoken negatively about my physical fitness.”