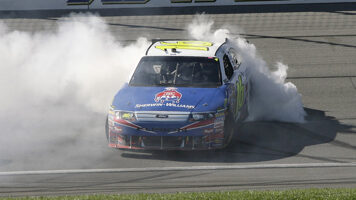 1. Jimmie Johnson: Johnson followed his win at Dover with a runner-up at Kansas, second only to race winner Greg Biffle. Johnson also took the lead in the Sprint Cup point standing, and leads Denny Hamlin by eight.

“Our last two results have erased the disappointment of our race at New Hampshire,” Johnson said. “With a win and a runner-up, as well as the points lead, you could say we put that first Chase race, as well as the Chase field, ‘behind us.’”

2. Denny Hamlin: Hamlin struggled with handling in the Price Chopper 400, finishing 12th and tumbling from the lead in the point standings. Hamlin, who led Jimmie Johnson by 35 entering the race, now trails the four-time defending champion by eight.

“I guess it’s fitting,” Hamlin said, “that one week after the bottom fell out for Clint Bowyer, the ‘top’ fell out for me.

Now, Kevin Harvick and I have supposedly made up from our incident at Dover. And people want to know what’s wrong with NASCAR. I’ll tell you what’s wrong—feuds that last only a week. A quick solution? Put Brad Keselowski in the Chase field.”

“Believe me,” Harvick said. “Of all people, I know what ‘striking distance’ is, and we’re well within striking distance. Although I wouldn’t dare do the things to Jimmie Johnson that I’ve done to Denny Hamlin.

And speaking of Hamlin, we’ve mended our differences. At least that’s what we’re telling everyone. The truth is, our truce involves one simple agreement….to disagree.”

4. Jeff Gordon: Gordon posted his first top-5 finish since Chicagoland with a fifth at Kansas, his 11th top 5 of the year. Still winless in his last 58 races, Gordon jumped three places in the Sprint Cup point standings to fifth, and trails Jimmie Johnson by 58.

5. Greg Biffle: Biffle raced to a dominating win in the Price Chopper 500, leading 60 laps on the way to his second win of the year. Back in the title hunt, Biffle is now in eighth, 85 points back.

“The No. 16 Sherwin-Williams Ford was perfect late in the race,” Biffle said. “We may not have been fastest at the start, but we were fastest when it counted. Just call my car the ‘High Plains Swifter.”

6. Carl Edwards: Edwards started 31st and hit the top 10 midway through the race at Kansas, leading two laps on his way to a sixth-place finish, his 16th top-10 result of the year. He is now fourth in the point standings, 53 out of first.

“Although I’m from Columbia, Missouri,” Edwards said, “I consider Kansas my home track. But, as my winless streak can attest, even at home I can’t be a visitor to Victory Lane.”

7. Kyle Busch: Busch made contact with David Reutimann early at Kansas, causing Reutimann to spin. Later in the race, with Busch running in the top 10, Reutimann struck back, sending the No. 18 M&M’s Toyota into the wall. Busch dropped to 22nd after the accident, and eventually finished 21st, one lap down. He fell four places to seventh in the point standings, and trails Jimmie Johnson by 80.

“If my name wasn’t ‘Busch,’” Busch said, “Reutimann would have never retaliated. It’s difficult to swallow being wrecked by a driver who’s not even in the Chase. Reutimann stuck his nose in where it didn’t belong. You’d think I would deserve a break. I guess some free passes don’t come as easily as others.”

8. Kurt Busch: Busch, in the No. 2 Miller Lite Dodge, finished a disappointing 13th at Kansas, undone by handling conditions at a track where he’s traditionally struggled. Busch dropped two spots to sixth in the point standings, 70 behind Jimmie Johnson.

“The No. 2 Miller Lite Dodge just wasn’t fast enough to challenge for the win,” Busch said. “Unlike my brother Kyle, I didn’t need another car to hinder my Chase chances. The one I was driving handled that fine on its own.

But I‘m surprised David Reutimann wrecked Kyle. Will I seek revenge on behalf of Kyle. Will I take the ‘2’ to tango? Unlikely. I’ve been called many things by many people, but never a ‘nepotist.’”

9. Tony Stewart: Stewart led four times for a race-high 76 laps in the Price Chopper 400, but trouble on late restarts cost him a shot at the win. He finished fourth, and now trails new points leader Jimmie Johnson by 127 points.

“127 points is not an impossible deficit to make up,” Stewart said. “With a rash of failed inspections and a outbreak of practice session feuds, I could be back in business. In actuality, though, the deck is ‘Smoke-stacked’ against me.”

10. Jeff Burton: Late-race handling problems prevented Burton from scoring in the top 5, and he instead settled for a disappointing 18th-place run at Kansas. Burton fell two places in the points to ninth, and trails Jimmie Johnson by 101 points.

“We’re 101 off the lead,” said Burton, “which doesn’t seem so bad considering there are seven races remaining. But, upon further inspection, that large of a deficit doesn’t really appeal to me.”