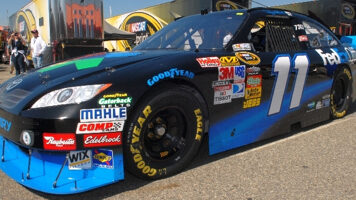 1. Jimmie Johnson: Johnson increased his points lead over second-place Deny Hamlin with a third in the AutoMax 500 at California. Johnson started the day with an eight point edge over Hamlin; J.J. left with a 36 point cushion.

“I increased my points lead by 28 points,” Johnson said. “In NASCAR speak, that’s a SAFER barrier.”

But, there’s a reason they call this the ‘Chase.’ And that’s because the eleven other drivers come ‘after’ me.”

2. Denny Hamlin: Hamlin finished eighth at California, losing ground to points leader Jimmie Johnson, who finished third. Hamlin trails Johnson by 36 with six races left in the Chase, with a pivotal race at Charlotte Motor Speedway next on the schedule.

“Engine failures have taken their toll on Joe Gibbs Racing cars,” said Hamlin. “Not only this year, but in years past. Apparently, JGR engines come with an expiration date, with that date being ‘during the Chase.’”

3. Jeff Gordon: Gordon overcame a pit lane speeding penalty late in Sunday’s race which ruined his shot at an elusive win. But he recovered to post a solid ninth-place finish, and moved up to fourth in the Sprint Cup point standings. Gordon now trails Jimmie Johnson by 85.

“Once again,” Gordon said, “a mistake cost us a chance at winning. It seems that we’ve often been fast, but we’re always slowed down by a mistake, whether by me or my crew. If you’re looking for words to describe this season, I think ‘Whoa is me’ works just fine.”

4. Tony Stewart: Stewart battled Jimmie Johnson on the final restart in the AutoMax 500, holding the No. 48 at bay while collecting his second win of the year, and one that salvaged his Sprint Cup title hopes. Stewart now trails Johnson by 107 in the point standings.

“There was ‘Smoke’ in California,” Stewart said, “and, for once, it’s not from a wildfire. We’re hot right now; I just wish our misfortune at New Hampshire hadn’t prevented us from adding fuel to the fire.”

5. Kevin Harvick: Like Gordon, Harvick’s day was offset by a pit road speeding penalty, but he still managed to finish seventh and keep Johnson in view. Harvick is 54 points behind Johnson with six races remaining.

“A pit road speeding penalty,” Harvick said. “A failed inspection. A denied appeal. A phantom debris caution. NASCAR obviously has a problem with Richard Childress Racing. And NASCAR obviously doesn’t like their decisions questioned. NASCAR touts its insistence that everyone follow the rules, but we here at RCR have found ourselves asking ‘Are they playing fair?’”

6. Carl Edwards: Edwards No. 99 Aflac Ford suffered an ignition problem on lap 58 at California and stalled on the track, requiring a push to return to the pits. He finished 13 laps down in 34th, and now trails points leader Jimmie Johnson by 162.

“Let me tell you,” said Edwards, “ignition problems are a real ‘turn off.’ I’ve heard of ‘start and parkers,’ but we might as well have been a ‘starter and parker’ in California.”

And our chances to win the Sprint Cup are practically gone. They call me ‘Cousin Carl,’ and after the race in California, I’m ready to say ‘uncle.’”

7. Kurt Busch: Busch was running 14th when David Ragan drifted up the track, pinching the No. 2 Miller Lite Dodge to the outside wall and causing left-front fender damage and a blown tire. Busch limped to the pits and restarted 29th, and moved up to 21st by races end. Busch is sixth in the point standings, 140 out of first.

“The No. 6 UPS car left me nowhere to go,” Busch said. “To say I was ‘UPS-et’ would be an understatement. It seems that, whether accidental or on purpose, other drivers can’t stay away from the Busch brothers.

And speaking of ‘odd attractions,’ can someone explain why Kyle and I have fan clubs?”

8. Kyle Busch: Busch’s engine blew on lap 155 and immediately declared his championship hopes over, ending what earlier had looked like a promising day in the AutoMax 500. He tumbled two spots places in the Sprint Cup point standings, and now faces a 187 point deficit to Jimmie Johnson.

“Hey, my engine isn’t the only thing that quits,” said Busch.

9. Clint Bowyer: Bowyer edged by Jimmie Johnson on the final lap at California, taking the runner-up spot in the AutoMax 500. Bowyer was leading with ten laps remaining, but NASCAR spotted debris on the track and through a caution, bunching the field.

“Just another example,” Bowyer said, “of NASCAR seeing something that wasn’t there. I insist there was no debris on the track, so NASCAR had no right to throw a caution. For that reason, I’d like to file an appeal to ‘reason.’”

10. Greg Biffle: Biffle, who won last week at Kansas, saw his chances of back-to-back wins vanish when his engine blew on lap 40, becoming the first of several Chasers to face trouble at California.

“It was a disastrous day for Roush Fenway Racing,” Biffle said. “There were so many engines letting go, I thought a Cheech and Chong movie might break out.”