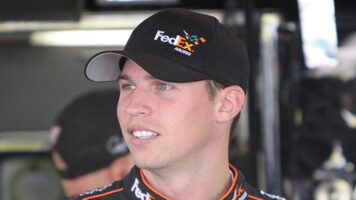 1. Jimmie Johnson: Johnson finished fifth in the Tums Fast Relief 500, a solid result, albeit one that was outdone by his closest Chase For The Cup competitors, Denny Hamlin and Kevin Harvick. Hamlin won, and Harvick finished third, as both cut into Johnson’s points lead. Johnson leads Hamlin by six, and Harvick by 62.

“My inability to pull away from Hamlin and Harvick,” Johnson said, “left me wondering ‘What the ‘H?’

But kudos to Hamlin for winning at Martinsville and making the Chase interesting again, just in time for the uncertainty of Talladega. Denny’s obtaining quite a collection of grandfather clocks from Martinsville. He won just in time, before I got too far ahead. So, not only was he racing for the clock, he was racing against it.”

2. Denny Hamlin: Hamlin passed Kevin Harvick with 29 laps to go at Martinsville and cruised to the win in the Tums Fast Relief 500, completing the season sweep at the ½-mile Virginia track. Hamlin sliced 35 points from Johnson’s points lead, and now trails by only six points.

“I did exactly what I needed to do,” Hamlin said. “Johnson was gradually pulling away from us in the points, but my win at Martinsville put a stop to that. Now, instead of being left behind, I’m right behind.”

3. Kevin Harvick: Harvick posted his third top-5 finish of the Chase with a third at Martinsville, his 14th top 5 of the year. He is third in the point standings, 62 behind Jimmie Johnson, with Talladega up next, where Harvick won in April.

“At this point,” Harvick said, “it’s every man for himself. At least, that seems to be Jeff Burton’s take on the matter. It amazes me that my teammate would race me that hard when he’s well out of contention for the Cup. So, if he puts his nose in my business, then I have no choice but to put my nose in his business.”

4. Kyle Busch: Busch finished fourth at Martinsville, one spot ahead of Jimmie Johnson, battling the defending Cup champion over the race’s final 100 laps. Busch is fourth in the Sprint Cup point standings, 172 out of first.

“After David Reutimann wrecked me at Kansas,” Busch said, “I declared my Cup hopes over. With Talladega looming, I’ve reconsidered. Just as hopes can be ruined by a double zero, they can be revived by a single ‘one,’ the ‘big one,’ in other words.

I’m sure Johnson, Hamlin, and Harvick will be laying back on Talladega’s 2.66 mile tri-oval, hoping to avoid trouble. Hopefully, the ‘big one’ will emphasize the ‘cream’ of ‘cream of the crop.’”

5. Carl Edwards: Edwards posted a solid eighth at Martinsville, scoring his 16th top-10 of the year. He trails Jimmie Johnson by 200 in the point standings, and will need a strong run, along with trouble for the frontrunners, at Talladega to find his way back in to the title hunt.

“I mean no physical harm to anyone,” Edwards said, “but I hope trouble finds my competitors at Talladega. If nothing else, I should be able to offer directions, because trouble usually finds me first at Talladega.”

6. Jeff Gordon: Gordon led 56 laps at Martinsville, but his hopes for a top-5 run were crushed on lap 380, when a heated battle with Kurt Busch left Gordon with heavy damage to the rear of the No. 24 National Guard Chevrolet. In the fateful sequence of events, Gordon dove inside Busch and bumped his way around the No. 2 Miller Lite Dodge. Busch retaliated, bumping Gordon and sending his back side hard into the inside wall. Gordon eventually finished 20th, two laps down.

“I’ve lived,” Gordon said, “and I’ve died by NASCAR’s ‘Boys, have at it’ directive. And Busch ‘killed’ me in this case. Luckily, in this sport, revenge is a lot easier to come by than a win. But revenge doesn’t always mean one driver comes out on the short end. On the contrary, my revenge on Busch will be a win-win situation. I’ll get mine, and he’ll get his.

As you may have heard, my No. 24 car will be sponsored next year by the anti-hunger campaign ‘Drive For Hunger.’ It’s a deal that makes sense, because, as someone mired in a lengthy winless strength, I’m certainly ‘hungry.’”

7. Tony Stewart: Stewart ran well at Martinsville, but a flat tire with ten laps to go derailed his run to a top-15 finish. Forced to pit under green to change tires, Stewart fell two laps down and finished 24th. He fell one spot in the point standings to seventh, and trails Jimmie Johnson by 236.

“If it’s not an empty gas tank crippling us,” said Stewart, “it’s an empty tire. I may be out of the running for the Sprint Cup, but that doesn’t mean I can’t enjoy the final four races. So, my situation is a lot like a flat tire—there’s no pressure.”

8. Matt Kenseth: Kenseth saw a top-10 finish at Martinsville fall to the wayside when he was tagged for speeding on the exit of pit road during a caution on lap 384. The penalty cost Kenseth 13 spots after he was forced to restart at the end of the longest line in 20th. He reclaimed five positions over the final 100 laps, finishing fifteenth, and gained one spot in the point standings to tenth, 293 out of first.

“All three Roush Fenway cars are over 200 points out of the lead,” Matt Kenseth said. “So are chances of winning the Cup are gone. Of all the teams in the Chase, at least you can say we’re consistent. We put three cars in, and we’ve got three cars ‘out.’”

9. Jeff Burton: Burton led 134 of 500 laps at Martinsville, but his race was defined more by a run-in with Richard Childress teammate Kevin Harvick. Burton and Harvick engaged in a heated battle, with Harvick bumping Burton under caution as the two bad-mouthed each other over the radio.

“Harvick is certainly no ‘CAT’ lover,” said Burton. “Last time I checked, there were no team orders in NASCAR, although Kasey Kahne’s departure would seem to indicate otherwise.

10. Kurt Busch: Busch finished 16th at Martinsville, battling his way to a hard-fought result that left Jeff Gordon spinning courtesy of Busch’s No. 2 Miller Lite Dodge. Busch sent Gordon into the wall after Gordon bumped his way past Busch on lap 380. Busch is now ninth in the point standings, 237 out of first.

“Gordon may have slammed his rear end into the inside wall,” Busch said, “but he learned the hard way that I won’t ‘back down.’”