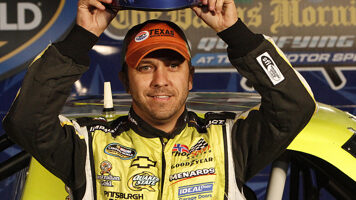 Fort Worth, Texas- Matt Crafton driver of the No.88 McGuire-Nichols/Menards Chevrolet, is the Pole Sitter for the NCWTS WinStar World Casino 350K at Texas Motor Speedway. Crafton qualified with a time of 29.964, this is Crafton’s second only NCWTS pole his first come last year. “Truck ran great off the trailer; we only ran a few laps in first practice session as a piece of lead pierced the left side of the car”. Crafton said in his post qualifying interview, Crafton also added that he has always wanted to win at Texas Motor Speedway, and is racing for wins in the series last three races.

Elliot Sadler sits second for the NCWTS WinStar World Casino 350K he had a time of 30.016. Sadler is the driver of the No.2 Realtree Outfitters Chevrolet.  “This is my first time in the trucks here at TMS”, Sadler said, “I am also thinking about running here for NNS next for Kevin Harvick Incorporated.”

Kyle Busch sits third for the NCWTS WinStar World Casino 350K he had a time of 30.054. Bush is the driver of the No. 18 Interstate Batteries/Iamsecond.com Toyota.  “I feel that I have really good truck” Busch said I am racing the No. 30 Toyota Driven by Todd Bodine for the Owners Championship”. “If he gambles, we will follow.

The NCWTS WinStar World Casino 350K will be televised at Friday at 8:30 p.m. ET on Speed and will on your local MRN affiliate and Sirius/XM channel 128.