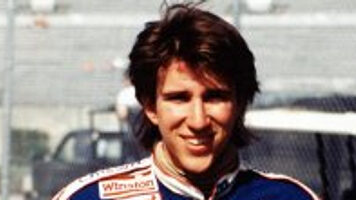 Once there was a hot shot driver from Connecticut causing waves in short tracks everywhere with his immense racing talents. He was a teenage hot shot, the next big thing, the greatest thing since sliced bread. No, I’m not talking about Joey Logano.

Before there was Joey Logano there was Kyle Busch, and before Kyle Busch, there was Jeff Gordon. But you already knew that. What you may not know, or remember, is that before Jeff Gordon there was Rob Moroso. The teenage phenom isn’t particularly new to NASCAR, and while many think Gordon was the first of his kind, Gordon simply followed in the shadows of another teen phenom. Unfortunately, it was one who never saw his talents come to fruition.

On September 28, 1986, at Orange County Speedway in North Carolina a kid from Connecticut celebrated his 18th birthday in the best way he knew possible, climb into a racecar. It was on this date that Rob Moroso made his Busch (now Nationwide) Series debut. While the finish of the event was less than stellar, heads were turned with his 6th place qualifying effort. His arrival had been announced.

Less than a month later Moroso would make his second career start in the Busch Series, doing so for an owner named Rick Hendrick, you might have heard of him. This time Moroso managed to finish the event, and do so in 18th place after qualifying in 15th at Rockingham. Rick Hendrick had taken notice, and that, as we have come to uncover, is usually a good sign.

The following season, in Oldsmobiles fielded by his father Dick, Rob Moroso would start 25 of the 27 races on the Busch schedule.

Moroso, 18 for much of the year, qualified three times in the top 5, including a 5th place start at the demanding high banks of Bristol in just his 6th career Busch Series start.

Over the course of the season Moroso would manage to finish in the top 15 an impressive 15 times in his 25 starts. Not bad for an 18 year old driving for a race team that was making its debut.

Of those top fifteen runs, there were notable head-turning performances turned in by the youngster, including 8 top 10 finishes, and two additional top 5 showings.

Moroso took on a pair of the sports toughest tracks, and in the fall came away with a 7th at Bristol and a 9th at Dover, two of the arguably most difficult tracks on the schedule.

Heading into the 1988 season, expectations had risen for Moroso. This was supposed to be the year he went from rookie phenomenon to championship contender in the Busch Series.

Moroso would run all 30 races while competing for the Busch championship, and of the 30 starts, he’d finish 24. The impressive part of that being that of the 24 races he managed to see the end of, he did so in top 10 fashion in 18 of them, throwing in 10 top 5 runs.

Moroso continued to show amazing talent on the short tracks, racking up good run after good run in the early part of the season. He led his first career laps in the 2nd race of the year Hickory, pacing the field for five circuits.

A few short weeks later he led 85 laps at Nazareth in route to a runner-up finish, his third top-five of the season’s first eight races.

Just two races later he would capture his first pole of his career at South Boston. he followed that up with his 2nd straight pole at Hickory the next race.

The fall Charlotte weekend would turn out to be quite a huge weekend for the youngster. That Hendrick fella once again put Moroso in a car, but this time in Winston Cup. All Moroso did was finish 14th in his Cup series debut.

Oh, and as a side note, Moroso’s Cup debut came the same weekend he would score yet another victory in the Busch Series, also at Charlotte. The Charlotte win cementing the fact that Moroso could also play on the big playgrounds.

When 1988 concluded Moroso would find himself 2nd in the final points standings, and barely even 20 years old. The future was bright.

In 1989 Moroso followed up his impressive 1988 campaign by becoming the youngest champion in series history at the time. Moroso won 7 poles and 4 races en route to becoming the series champion. Perhaps more impressive than either of those two statistics was that Moroso qualified on the front two rows a whopping 17 times in 29 starts.

Among his 4 wins, two more came at Charlotte, giving him three consecutive wins at the track and leaving expectations sky high for him heading into the 1990 season.

Instead of being snatched up by one of the already established teams in Cup though, Moroso would go Cup racing in cars owned by his father, staying in the family.

At 21 years old Moroso was preparing to go full-time Winston Cup racing, and the expectations were plentiful.

What followed was what was to be expected from a driver so wet behind the ears, and so young, with a team so young. There were strong qualifying performances, and some quality runs. However, there was also a slew of blown engines and wrecked racecars.

This was a time though when this was expected from young kids. This was before the time when rookie drivers entered the sport in top-notch equipment and were expected to win races off the bat. This was when rookies were still supposed to be in their late twenties, and when rookies were given a couple years of a learning curve. Owners knew they’d be dealing with torn-up race cars, just as long as the evidence of speed was there with their talented youngsters.

With Moroso, there was no question of the speed being there. Despite all the torn-up equipment, very little of the luster had rubbed off of the talented rookie.

Unfortunately, following the race, it appeared Moroso may have spent too much time celebrating that 22nd birthday.

One thing about young people, is young people make mistakes, and at usually a more frequent, and dangerous rate than most others. It is one of the reasons rookies tear up so much equipment, it is simply the nature of the beast.

This time though the beast proved to be more than sliding backward into a wall at Richmond.

Moroso at this point at already received four speeding tickets, a rather high number for someone of his age. It seemed the very traits he exhibited on the racetrack that did make him successful, and so hard on equipment, followed him away from the track into his passenger car.

This particular night Moroso was said to have had a blood alcohol content of 0.22, over twice the legal limit in North Carolina at the time. Moroso was apparently driving his vehicle in speeds of upwards of 75 mph……..around a curve with a posted speed limit of just 35.

Overdriving the entrance to turn one at Martinsville is one thing, doing it on public roads? Something completely different.

Moroso lost control of his vehicle and hit an oncoming car. Both Moroso and the driver of the oncoming car were killed.

Moroso would still win rookie of the year posthumously, becoming the first, and thus far only, driver to ever receive the award in such a fashion.

That award was of little consolation to the family of Tammy Williams, the woman he hit, nor to his own father. Dick Moroso would never again field a full-time Cup team, and by 1996 was out of the sport completely.

Some say NASCAR didn’t do enough to keep Moroso’s memory alive. There are also those who argue in lieu of how Moroso died, and the manner in which his actions killed someone else, his memory was best let go of. Many would argue that NASCAR shied away from the Moroso issue to avoid having to deal with the fact that a future star they were marketing was guilty of a DUI and had killed an innocent person.

Others still will argue that this would have been the perfect time for NASCAR to speak out more against DUI and reckless behavior.

Whatever the reasons, Moroso’s death was as quiet a death as you can find in a major auto racing series.

What was once the future of NASCAR, a promising young star who would help bridge the gap from the Pettys and Yarboroughs to the new generation of NASCAR drivers was suddenly an afterthought.

Moroso didn’t race in the cup series long enough to leave an indelible mark, and his family name was not big enough to keep his name on the tips of tongues throughout NASCAR circles, let alone sports circles in general.

When people think of NASCAR tragedies, they think of Allison, Earnhardt, Richmond, and Petty. The name Rob Moroso barely appears anywhere but on a list of former rookie of the year winners.

But for those that saw him drive, he was Jeff Gordon before Jeff Gordon was. Just ask the man for whom he made his Winston Cup debut, Rick Hendrick.