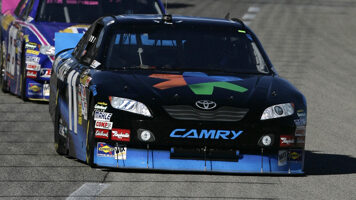 1. Denny Hamlin: Hamlin won at Texas, leading 31 laps in the AAA Texas 500 to wrest the points lead in the Sprint Cup standings from four-time defending Cup champ Jimmie Johnson. Hamlin entered with a 14-point deficit and left with a 33-point advantage.

“The No. 11 Fed Ex Toyota was awesome,” Hamlin said. “That’s what you call a five-star, triple-A, one-asterisk performance. My victory completes the season sweep at Texas, proving that I ‘don’t mess in Texas.’

Of course, I’m no longer the ‘hunter;’ now I’m the ‘hunted,’ and the proud owner of two imitation six-shooters. I’m the big gun now, so, among Joe Gibbs Racing drivers, I’m the straight shooter, while Kyle Busch is the loose cannon.”

“33 points is by no means an insurmountable lead,” Johnson said. “If asked by a distinguished gentleman if I could overcome such a deficit, I would confidently state, ‘I’m able to mount that, sir.’

But I could stand here and blame it all on my pit crew. They made so many errors, I wanted to go ‘Jeff Gordon’ on them. Which is actually what I did when Chad Knaus dumped the 48 crew for Gordon’s pit team.”

3. Kevin Harvick: Harvick battled to a sixth-place finish in the AAA Texas 500, keeping himself solidly in the hunt for the Sprint Cup championship. Harvick is third in the point standings, 59 behind Hamlin in first, and 26 behind Johnson.

“There’s a dogfight for the Sprint Cup,” Harvick said, “and a ‘catfight’ over Jeff Burton’s driving of the No. 31 Caterpillar Chevrolet. Both Burton and Jeff Gordon are well out of contention for the Sprint Cup, so I don’t know why all the fuss. Their conflict is much like the remnants of their cars after their accident last Sunday—a ‘meaningless scrap.’”

4. Matt Kenseth: Kenseth equaled his best finish of the year with a second at Texas, nearly taking the checkered before succumbing to Denny Hamlin’s charge. Kenseth jumped three places in the standings to fourth, 325 out of first.

“I had the lead,” Kenseth said, “but I couldn’t hold it. You could say I ‘lost first,’ while my teammate Greg Biffle lost ‘first and second.’”

5. Jeff Gordon: Gordon, who last won 18 months ago at Texas, came nowhere near winning on Sunday, finishing 37th after being wrecked by Jeff Burton under caution on lap 190. An angry Gordon charged Burton, shoved the driver of the No. 31 Caterpillar, and took a few swings at Burton as officials separated them.

“I’ve finally ended my winless streak,” Gordon said, “but only because I let my emotions ‘get the better’ of me.”

6. Kyle Busch: Busch finished 32nd at Texas, after a spin on lap 159 set off a chain of events that tried the limits of Busch’s emotions. After pitting, Busch was penalized a lap for speeding on the exit. Then, while serving his penalty, Busch gave a NASCAR official a long and hard look at his middle finger. Busch was then penalized another lap for unsportsmanlike conduct, and finished two laps down.

“Say what you will,” Busch said, “but that finger was there to remind me that I needed to be in first gear. If NASCAR officials don’t believe my explanation, then they are full of ‘shift.’”

7. Tony Stewart: Stewart was running sixth when he gambled during a caution on lap 328, opting for four tires while the other front-runners remained on the track. Stewart restarted 16th, and although he made up five places to finish 11th, he would have been better off staying out. He is now eighth in the point standings, 363 out of first.

“You know age and experience has changed me,” Stewart said, “when there’s a race with fisticuffs and a middle finger, and I’m involved in neither.”

8. Carl Edwards: Edwards finished 19th at Texas, the low man in a solid day for Roush Fenway Racing. Teammate Matt Kenseth finished second, while Greg Biffle led the most laps, 224, on his way to a fifth.

“I hate losing,” Edwards said, “almost as much as I hate winning, the Nationwide race, that is, and having to shake Brad Keselowski’s hand as series champion.”

9. Greg Biffle: Biffle led 224 of 334 laps in the AAA Texas 500 and finished fifth, his eighth top-5 result of the season. Biffle’s No. 16 Red Cross Ford was easily the class of the field, but he lost first and second gear with about 30 laps to go. He improved two places in the point standings to ninth, 372 out of first.

“Of all the drivers who had a right to be upset,” Biffle said, “I feel I’m the one who should have gone off the deep end. Instead, I showed restraint while Jeff Gordon and Kyle Busch unloaded a season’s worth of frustrations.

10. Joey Logano: Logano finished fourth at Texas, leading 30 laps on his way to his 15th top-10 result of the year, best among non-Chasers. Logano has top 10’s in his last four races, and has served noticed that he’ll be a contender for the Cup next year.

“It’s hard not to become a better driver,” Logano said, “with the abundance of good examples being set for me by the veteran drivers. Between fights, failed inspections, foul language, and middle fingers, I feel I can finally become the driver I was meant to be.”

Jeffrey Boswell
Previous articleSpeedway Media News and Bits
Next articleCan Mike Ford Deliver the Knock Out Punch in the Final Two Rounds of the Chase?