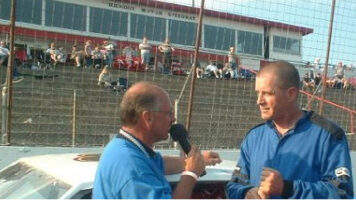 For most of us, life is all about change.

We start out with the hope and exuberance of youth but childhood fantasies fade away and are soon forgotten.

Matt Poole is the rare exception.

“From the very first time I saw and heard a race car, I knew that’s what I wanted to do,” he told me.

I first spoke with Matt about nine months ago and was inspired by his unique story.

His dream of becoming a racecar driver laid dormant most of his life but it was never far away from his heart.

When tragedy struck, he found the courage to pursue his heart’s desire.

Poole lost his mother suddenly to a heart attack in 2003 and he never viewed the world in the same way again. He decided to pay tribute to the one person who had always believed in him by pursuing a career as a racer.

What makes his story unusual is that his journey didn’t begin until the age of forty.

Some of his friends tried to discourage him and a few even called him crazy.  Matt just smiled and forged ahead with a determination that would not be shaken.

In 2005, he suffered another loss when close friend, Tonya Schultz, was murdered.

His first big break came in 2007 when Chris Lafferty of Lafferty Motorsports signed Poole as a development driver. Finally, on July 21, 2007, he ran his first race at Hickory Motor Speedway in Hickory, North Carolina.

Poole finished in 12th position. As a way to honor his mother and friend, he donated his winnings to one of his favorite charities, The Victory Junction Gang.

“I’m not doing this to become rich or famous,” Matt says, “I just want to race.”

In May 2008, Poole ran his second race at Hickory Motor Speedway, finishing in seventh place.

Poole stays close to the racing community at his day job at NASCAR Racing Experience as an instructor but every spare moment is spent chasing his dream.

I talked to Matt recently to get an update on his progress and to discover what he’s doing to accomplish his goal.

“I do all of my own PR and marketing, though I do have a dear friend who has been helping me by contacting potential sponsors as well as car owners in an all out effort to get me back in a race car.”

“I am constantly making phone calls, sending emails, talking to companies and team owners, and handing out business cards. I have been on motorsports radio shows, such as “Next Time By” hosted by Summer Dreyer on Blog Talk Radio, and in the near future I will be a guest on the “Speed Freaks” radio show. Articles about my story have also been featured on numerous motorsports websites and in a few newspapers.”

I asked Matt if all of his hard work paid had paid off.

“I had a potential sponsor that was very impressed with my story, my drive and determination. They expressed an interest in sponsoring me for a full season, but at the last minute they backed out.”

This sort of experience might make some people lose faith but Poole says that it only fuels his desire.

“Almost everyone I speak to about my dream has encouraged me,” he says.

For inspiration, Matt looks to drivers like Mark Martin and a childhood favorite, Morgan Shepherd. He recently had the opportunity to speak with Shepherd in the driver’s meeting at Charlotte Motor Speedway.

Poole is doing just that.

“I won’t be happy until I get to Victory Lane.  I’m determined to get there, even against all odds.”

Angela Campbell
A native of Charlotte, NC, Angela (Angie) was first introduced to racing by her father. An avid fan of NASCAR, she found a way to combine her love of racing with her passion for writing. Angie is also an award-winning member of the National Motorsports Press Association. Follow her on Twitter @angiecampbell_ for the latest NASCAR news and feature stories.
Previous articleNASCAR Sprint Cup Chase Tracker: Hamlin, Johnson and Harvick With 2 To Go
Next articleWham, Bam, Thank you Ma’am – Travis Pastrana comes to NASCAR