Danica Patrick’s Ford 300: A Race of Learning the Ropes to Finish 19th 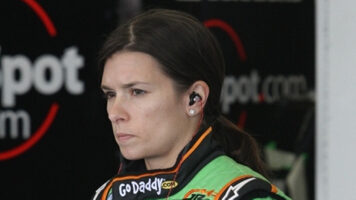 When Danica Patrick started this year, her number one goal was to learn about driving stock cars and everything she needed to know about it. [/media-credit]As near the end of the year, she is still working at that, though slowly improving on track also.

Patrick’s Ford 300 on Saturday was a race where she showed that she wanted to learn the ropes and learn more about stock cars. Listening to her conversations on the radio with crew chief Tony Eury Jr., spotter TJ Majors and fellow JR Motorsports driver Aric Almirola showed the qualities of somebody who is looking to learn.

A look back through her day would allow us to see how much she learned.

Patrick started the day fifth, though dropped back early as Eury Jr. wanted her to follow the leaders and learn the proper line.

The first caution of the race came out on lap 11 when Jeremy Clements got loose while under her and spun. She reported the car at the time being tight in the center of the corner.

The caution then came out again on lap 23, which Patrick stayed out to gain the lead to lead her first laps in NASCAR. She lost the lead quickly after the race went back to green as Justin Allgaier passed her.

The third caution of the race then came out on lap 30 when Carl Edwards, Almirola and Kasey Kahne wrecked. Patrick barely snuck by, though had some interesting words on the radio about the incident.

“Who hit me coming out of Turn 2?” She asked on the radio.  “When I @#%!ing darted down to bottom of the track it was because someone hit me.”

Eury Jr. explained it was the No. 32 of Reed Sorenson and the fact that she was slower on the restart due to the older tires.

Almirola’s day officially went from bad to worse on lap 41 as he blew a flat tire. This turned out to be a good thing for Patrick as Almirola came back out with the damage fixed, giving her tips while on track.

On lap 68, Almirola told her that she needs to move up the track a lane to a lane and a half where there was more grip.

Under a following caution for debris, Patrick continued her step of learning as she asked where most cars were running to be able to pick up the best line.

“From middle to top.” Majors told her. She also made a pit stop, getting some more adjustments as she was looking for more front grip.

The rest of the race continued to go calmly for Patrick, yet she kept showing signs of working into a better driver.

With 90 to go, she tried the line that everybody was talking about, though reported that she had a bad push. However, she had improved her lap times by two tenths from the last run under green.

“Just keep searching and finding a way.” Majors told her, referencing for her to work on how she was driving the car into the corner.

The caution then came out on lap 135 as Trevor Bayne got into the wall. Under the resulting the caution, Patrick continued her learning experience with making sure to ask Eury Jr. questions.

Danica Patrick: It is pushing. That was a good change for a while but then it went away. It seemed like it did when the tires got hot. How many laps?

Patrick: So we’ve still got another stop after this?

Eury Jr.: No, you can make it from here. I’m just debating what to put on – stickers or 20 laps. I’ll probably put the stickers now

This was also when Almirola started showing more influence as he came on the radio under caution to give her more advice.

Aric Almirola: Danica, you got to enter higher into three as there’s more grip there. At about where the caution lights are, you should try to enter the middle from there on.

Danica Patrick: 10-4. Thanks a lot for the help

A quick caution after that also allowed Almirola to continue his explaining as he showed her on the track what he was talking about.

Aric Almirola: You come in on the gray, which is fine. You then turn down away from it. You should try to stay along this black seam, unless you’re tight off.

Danica Patrick: I’ve been tight in the center. If I try to stay up there, it just pushes further up.

Almirola: 10-4 See right here on this spot, I ease off the brakes and then here I drive off.

Patrick: Thanks for showing me, Aric. I really appreciate it. I’m just trying to learn out here.

Patrick tried to follow Almirola’s advice, still finding issues, in which Majors addressed with her under a caution with 27 to go. The conversation proved the sentiments once again that she’s working at it as she displayed not minding the words of advice coming from her spotter.

Danica Patrick: I was trying to run the top there. I am going to try to run the bottom a little more till it’s gone away and then go higher.

TJ Majors: I know you may not like me telling you this but you need to be patient. You got to try to roll the center longer as I know you want to get back to the gas quick.

With Almirola out there showing Patrick the proper spots to run, it allowed her to pick up on it more and be able to start finding that feel.

It goes back to what she said a couple weeks ago from when she spoke with Mark Martin. She is looking for that person to possibly step up and help her find that feel. Martin also said that she needs someone to show her what the car is supposed to feel like. Almirola did that in sharing his set-up and then showing her where to run on track.

This in exchange helped Patrick get her first top 20 in NASCAR competition, concluding her year of learning. If she can continue down this pathway, she could become a competitive driver.

One thing that could be advised is helping her to learn how to drive a car when it’s on the loose side as one of her biggest complaints was it being tight all race.

Eury Jr. probably didn’t want to push it loose due to knowing she probably didn’t have a good feel for it, however it is something that’s needed if she wants to continue to progress. It’s something that you notice all top 10 drivers being able to do as loose is fast and allows the driver to drive the car in.

Considering she had no prior stock car experience and she’s in the second top series, she has proved herself well as she has continued to take steps in the learning process. Homestead-Miami Speedway is a fine example of that with what occurred throughout the race.

SM Staff
Previous articleWe should expand the Chase to include 20 drivers…really
Next articleNOTES FROM THE NASCAR NATION: Please don’t tell me changes a HMS are not an Earnhardt move