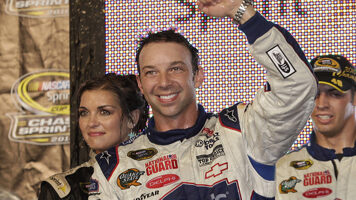 Through the history of NASCAR, there are only few driver-crew chief relationships that are capable of creating dynasties. One of those would be the combination of Johnson and Knaus. [/media-credit]The strength of their relationship, plus Knaus’ desire, are two of the keys to that make them as good as they are. Knaus’ desire was seen even before he became the crew chief was Johnson; it was shown to Phillippe Lopez when Knaus worked for Stanley Smith as a shop-foreman.

“But he would do whatever it took to make himself better. He was great with working on bodies and Bondo (putty used in fabrication), but he wanted to learn about shocks. He was consumed with learning about it, mastering it and then doing it better.

“It wasn’t unusual for me to have to tell Chad at two or three in the morning that it was time to go home.”

It was Knaus’ attitude, however, that almost broke them up.

Johnson’s description of the breakdown at the end of the 2005 season was they both wanted it so bad that they were “butting heads in the process.” So Hendrick pulled them into his office, ready to discuss things between them and if needed, separate them.

“It was getting to the point where Chad and Jimmie were having more bad days than good days,” Hendrick said. “I called them into my office … and said ‘If we’re going to act like kids, we’re going to have cookies and milk and we’ll have some down time where we can talk about what you don’t like about each.”

With a play on what was seen as “childish behaviour”, he set the room up as if it was a kid’s room and served them Mickey Mouse cookies and milk. This meeting allowed both Knaus and Johnson to get all their feelings about each other.

“The meeting was supposed to be how we split the guys up,” Hendrick said. “But in this meeting, these guys really put their heart on the table and they talked specifically about what they didn’t like. Instead of holding it in, they were able to become closer friends and still respect each other’s professional position in the team.

“I’m real proud of them because I would have bet money that we couldn’t fix it. I think both of those guys would be successful in their own right, but I think they’re stronger together.”

“It took a lot of effort on each other’s parts,” Knaus later on said in a different article. “At that point, we were both tired and very frustrated. We were on the cusp on winning a championship for the first three years and we weren’t able to pull it off. Expectations were high. We weren’t able to deliver. There’s a lot to wanting to deliver for Rick and Jimmie and I felt that I laid down a little. I didn’t make the right decisions.

“It takes maturity, wisdom and you have to learn. We learned over a period of time. You have to go over life experiences and race car experiences to get what you really need. There was a point there that we had to make a decision whether we wanted to do this or not.

“We just had to learn to rededicate ourselves to the cause—and that’s what we did.” This conversation with Rick helped their relationship a lot, allowing them to now be the driver-crew chief pair to beat.

“Jimmie and Chad have something very, very special together,” Gordon said in the article “One More with Feeling.” “I know everything that goes into their cars and everything about their set-ups, and they’re still beating us. It’s frustrating but you’ve got to give them credit. They’re the best right now.”

“My relationship with Chad has been unlike any relationship I’ve had before with a crew chief,” Johnson stated in November of 2008. “We’re close in age, which is a first for me, and we share a lot of things in common. We have two completely different personalities, and his strengths fit my weaknesses and my strengths fit his weaknesses. So I think the pairing of us both has been really good.”

Knaus still has that desire, though now it is pointed in a direction that benefits them all and has equaled record material. Since that discussion, they have gone on a roll, winning the last five championships (2006-2010).

His motivation and hard working style at times has got him in trouble in the process as he has been caught in a sense cheating and has been suspended.

In 2006, Knaus was suspended for making an illegal adjustment to the rear window after Daytona 500 qualifying, which resulted in a four week suspension. Despite this, the No. 48 team still came out on top, winning the Daytona 500 with interim crew chief Darian Grubb.

In 2007, Knaus was suspended for six races as a result of the shape of the fenders in between the template points being in question by officials.

In 2009, Knaus was warned about getting close to breaking the rules of with regards to the height rule as he was only a 1/16 of an inch within the window allowed.

A lot of people have labeled him with the label of a “cheater”, though he says that it’s him doing his job to push the limits and find an advantage for his team.

“I don’t cheat,” Knaus told Jenna Fryer in 2009. “I think it’s easy for me to be labeled that way. We’ve done a lot of things to help the sport transition and develop new rules, but that doesn’t mean we are cheating. We are pushing the limits.

“Look at Tiger Woods, because he trains more and practices more and pays more attention to club selection and studies the greens, is he cheating? That’s not true.

“Look back at the things I’ve been in trouble for, and that was maybe two times that something was actually outside the rules. I think it’s a bad label, a bad label for the team. But it doesn’t bother me a lot because I know deep down it’s not the case.

“The fenders on the cars on Sonoma? Those were not illegal. The casual fan doesn’t understand it. It’s easy for someone to label that a person is a cheater, when in reality it wasn’t cheating, it was just not done the way it should be.”

Knaus is referring to the last piece of the art of “creative interpretation”, which is reading the rules and interpreting them in the way you feel, though also maybe a way that they were intended to be. It’s about finding that grey area.

“I think that’s our job, to find those areas of interpretation, the gray areas, and do just that,” ex-crew chief Robbie Loomis said in an article. “Interpret. There is a lot less room in there to find an advantage than there used to be, but that’s part of the challenge.”

Knaus is not the first of his type, too. There were others before him who pushed the rules and have been recognized as some of the best.

Smokey Yunick was one of the most famous people for doing this as he always was looking to see what he could do within the rules. There’s a story where in tech inspection, NASCAR removed his fuel cell and Smokey turned around, asking, “Are you done yet?” and they told him. He then proceeded to drive away from the officials, but how’d he do that?

He had a fuel line of 11 foot coils of two inch diameter (equaling five gallons) and had enough fuel still in the car. He did that to therefore gain more fuel millage but most importantly, because the officials forgot to write that rule. Now if you read the rulebook, you notice there’s a length specified.

Then there was Ray Evernham, who came out with the car T-Rex at the 1997 Winston, dominating the show. After the show, Evernham was pulled aside and NASCAR specifically told him that he was not to bring that car back.

“We went through the rule book and wherever there was a real gray area or no specifics regarding certain components, we worked hard in that area with new things,” Eddie Dickerson, manager of Chassis Engineering at Hendrick Motorsports, said in an article on NASCAR.com. “There are no major changes you can make to components on these cars. So we worked hard in different little areas. It was a combination of things. … [But] we did not do anything illegal with the car.”

Richard Petty was quoted in a NASCAR.com article saying, “I always told my guys, ‘Cheat neat and you’ll get by with a bunch of stuff.’ I don’t particularly tell my guys to cheat. I just tell them not to get caught.”

It’s all about the art of the teams trying to find that advantage.

“Every team out there is trying to do something to be faster than the next,” Knaus told Ed Hinton in 2009. “If they’re not, they’re not running competitively. I can promise you that.

“And if the crew chief is not trying to push something to make his car faster, then he’s not doing his job and he’s not living up to his responsibility.”

Johnson feels that Knaus has this motivation due to his own fear of losing.

“I think it’s a fear of losing that motivates him more than anything,” Johnson said. “He is more motivated by dominating, in a sense. We’ll have what we consider the best car in practice and look at lap tracker and we might have a tenth on the field and he’s like, ‘We need more.’ That’s just his mindset. It’s more, more, more. We’ve got to be better. We’ve got to be better.

“I feel that he’s afraid of losing. When he loses, something goes on in his head and I don’t know if it comes from being a kid and racing and working his way up through the ranks or watching his dad race or whatever, but there’s something there that he is afraid of losing. And that’s why when he wins, he’s kind of chilled and relaxed because it satisfies what that fire is inside of him.”

“I don’t want to lose,” Knaus said. “I don’t. There’s some validity to that. Everybody wants to be good at something and this is what I want to be good at. I don’t want to let anybody down. I’ve not had a lot of other stable things in my life and the race car has always been there.”