Rick Hendrick: The Artwork of a NASCAR Champion and Someone To Always Respect 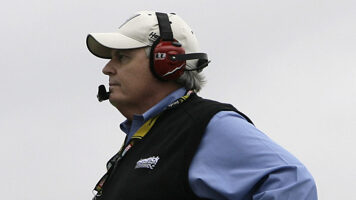 When it was announced last year at the Sprint Cup Series banquet that Rick Hendrick would be receiving Bill France Award of Excellence, nobody was surprised. [/media-credit]Everybody understood why Hendrick was receiving the award, as his actions through his 26 years in the sport speak for themselves. Hendrick has proven himself on-track as he’s made Hendrick Motorsports the best team in NASCAR.

Though beyond that, he’s been through a lot of personal battles and stayed strong as he fought a battle with leukemia in 1997, and fought through the death of 10 of his closest friends in 2009.

The success for Hendrick through the 26 seasons has been great, considering where it started and how it could’ve not even taken place. Hendrick and driver Geoff Bodine went into the Martinsville race in 1984 with one thing on their mind—run well or else they’d be done soon.

“It was a pivotal race for us,” Hendrick later told The Sporting News in a 2004 interview. “I know exactly what some of these guys feel like who have an unsponsored car—we did not have a sponsor. We had a small associate on the car, All-Star Racing and City Chevrolet, my store in Charlotte. We were running the deal out of our pocket and needed some success to sell a sponsor.”

Bodine would do more then just run well and lock in some sponsorship—he’d win the whole show as he took the lead with 48 laps to go and never looked back.

“The race just unfolded,” Bodine said. “We were running good. I knew you had to pace yourself at this track; brakes were really important. I was doing that throughout the race. At the end, it was just perfect. The neat thing about the race was it was Rick’s first win, my first win; but no one fell out of this race. None of the good cars were out.”

Hendrick wasn’t there for the race as at the time, he was in church with his wife. After the race was over, he called his mother and asked him how they had done. His mother told him, “Bodine blew up…no seriously! Nobody has told you! He won!”

That year, Hendrick and Bodine finished the year with a total of three wins, seven top-fives, 14 top-10s and three pole positions.

Since then, the success has only grown for Hendrick as his drivers have won 194 Cup races and 10 Cup titles.

In the process, he’s also set records. In 2010, driver Jimmie Johnson became the only driver ever in NASCAR history to win five championships in a row (2006-2010) and Hendrick now ranks at the top of the all-time winners list.

Last year, Hendrick also became the only driver to have his cars finish one-two-three with Johnson first, Mark Martin second and Gordon third. The size of the organization has also grown along the way as he went from a small shop of approximately 20 people to now employing more than 500 people.

Though when it came to Betty Jane France’s speech to announcing the award to Hendrick, it was not the stats she brought up; it was the other elements of Hendrick.

“NASCAR has had many iconic figures throughout its rich history, and Rick Hendrick certainly falls into that category,” France said. “Through the years, he has not only won our respect but our hearts as well.” These words from France were preceded also by praise from two of his drivers during their speeches at the banquet.

“You taught me to live big and small—live big in your passion for what you do, what you believe in and in your successes, but be humble and appreciative and give thanks for all those things,” Jeff Gordon said during his speech.

Martin said in his speech he sees “a little bit of Rick Hendrick in each and every one of” the employees of the team and went on to add, “You just win everything there is in NASCAR. You made history, win all these championships. You’re a big winner. Congratulations and thanks for letting me be a part of it. But that’s not the most impressive part of it. To me, you’re a true champion as a person, such an incredible individual that affects so many people in a positive way. I’d like to be more like you.”

These elements that both Gordon and Martin speak about go towards the way that he treats the people around him.

During discussions about the sport, you hear people getting talked about in a negative way somehow. Though in the midst of those discussions, nobody has anything negative to say towards Hendrick, as most people respect him and always regard him as a positive person. This is because he always treats people—no matter who they are or what their background is—positively and with respect. Hendrick is a person that you never see talk bad about people, even when others may.

One example would be Kyle Busch,

a driver whom Hendrick released in 2007. Everybody speaks of Busch in a negative light, due to how he’s reacted on track with his attitude. Everybody thought Hendrick let him go and did it due to that attitude and didn’t want to deal with him.

Though according to Busch’s manager Jeff Dickerson, it was Hendrick who gave Busch and Dickerson the best advice in choosing a new team for Busch to go with. Dickerson recalled going to Hendrick numerous times to ask him questions and Hendrick would always be open to answering them. Dickerson credited Hendrick for being one of the main players in the changing of the teams. Busch also went on to add that nobody was to sit and blame Hendrick for letting Busch go, as that was partly the fault of Busch.

The reason Hendrick had let him go and hired Earnhardt Jr. was because Busch was hinting that he was looking around, when actually he was liking the scenario at Hendrick Motorsports.

So why does Hendrick have the theory to go out and be nice to everybody, even if they’re on an opposing team? Simple—it’s all about the people for him. When speaking of the success of his organization, he always feels the need to bring up the people first.

“I think our people are the biggest asset,” he says. “If you can keep it together and tweak it, it’s much better off than tearing it down and rebuilding it every year. It slows you down.

“I’ve seen this happen in my career here. You can have all stars together; there’s no guarantee they’ll work. I mean, you can guess the best so called crew chief and best driver in the garage area and put them together, and that’s not necessarily going to work. You know, what I’ve tried to do is promote tweaking it rather than rebuilding it. I’m a fix it kind of guy rather than a strip-it-and-rebuild-it kind of guy.”

This attitude is what drives the employees to work so hard and why you’ll see Hendrick employees putting that extra effort in, according to Johnson, Alan Gustafson and General Manager Marshall Carlson.

“The way that he goes about keeping us going, he’s got one requisite, and that is that we race together, and that’s absolutely imperative,” Carlson adds. “Beyond that, he gives everyone a lot of flexibility and a lot of autonomy, a lot of—as far as the X’s and O’s, these guys figure that out, and these guys bring their game to the track.

“And I think that competitive people who want to win are attracted to that. I think that’s why Jimmie was attracted to the organization and Chad and why they continue to want to be there. …There’s 500 teammates back at Hendrick Motorsports who have built that place, and every single one of us owes an incredible debt of gratitude to Rick for his leadership, for his commitment and dedication for giving us the resources to have these opportunities.”

“I don’t think there’s any person that I’ve ever met who was more compassionate and who treats fellow human beings better than Rick Hendrick,” Gustafson says. “And I think that’s the key for me personally, and that’s all I can speak on.

“I think he genuinely enjoys bringing good things and happiness to people’s lives, and he does a great job of it. So he’s just a super special person. The world would be a worse place without Rick Hendrick in it. He’s just a great guy and somebody you will do anything for because he will treat you the same way.”

So when it came towards choosing someone whom to look up to, I did not have to look far past Rick Hendrick in including him on the list.

Rick, you showed so many qualities that showcase a top quality of person. Your dedication and the success of your team have shown me that hard work pays off and even though it may get hard at times, I need to keep at it. The qualities you showcased well in getting through the hard times have showed you’re a fighter and that giving up is not an option. Though the heart you have is what brings you to the front of my mind. The friendship you have shown and how much you care about others is what makes you stand above others when looking for someone to look up to.