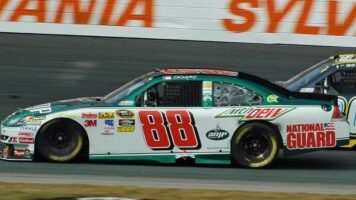 Even though Dale Earnhardt Jr.’s current deal isn’t expected to expire until 2012, Rick Hendrick has confirmed to ESPN.com’s David Newton that the two parties are working out a new contract extension already.

Shortly after finishing their first full season together at the No. 88 Amp Energy/National camp, Lance McGrew and Earnhardt were one of three teams to be involved in the latest swap at Hendrick Motorsports. Next year, Earnhardt’s cars will be built in the same shop as five-time and reigning Sprint Cup Series champion Jimmie Johnson. The Kannapolis, N.C.-native will also have Steve Letarte calling the shots atop of his pit box, his third crew chief change since he joined the organization in 2008.

“We’re looking at extending it,” Hendrick told ESPN.com. “I really like him. I think the world of him. I know he can do it. We just have to get the right combination in, and I think we’re going to have it.

“I hope we get to race together until he retires … until I retire. I’ll retire first,” he said.

Earnhardt will be looking to make the chase in 2011, to prevent missing his third consecutive chase. He pinpointed his confidence as his biggest problem and that he can help himself more than anyone else can help him.

“The only person that can truly help me get where I need to go starts with me, then it goes to Rick, Steve [Letarte] and those guys in your inner circle every week and in your corner every week,” Earnhardt said.

“My biggest problem, I think, is my confidence.”

Earnhardt was awarded the Chex Most Popular Driver award for an eighth straight year on Thursday.  He finished 21st in the Sprint Cup Series points standings and is in the midst of a 93-race winless streak.