Jimmie Johnson: More of the Same, Yet Different 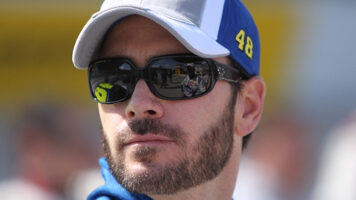 NASCAR Championship week in Las Vegas has culminated yet again in the crowning of Jimmie Johnson as the Sprint Cup Champion. And while it might feel like more of the same old same old with Johnson as the now five time champion, there is still a feeling in the air that this year is somehow different. [/media-credit]Sure, Johnson’s consistency and resiliency have served him well, as it has since he won his first championship in 2006. Amazingly, his statistics during that period, from race wins, poles, top five, top ten and average finishes have all remained steadfastly and almost eerily consistent, especially with the resultant championships.

Johnson’s partnership with crew chief Chad Knaus has been another source of sameness and constancy and is in fact the only driver/crew chief relationship that was not changed for next year by team owner Rick Hendrick. Their partnership has garnered the pair an absolute place in the NASCAR history books and whispers of the greatest driver and crew chief in the sport today abound.

Throughout it all and in spite of all the pressure, there is one other thing that also has remained the same throughout Johnson’s championship runs, that of his laid-back, California-style personality. Even in the midst of the most hotly contested Chase this year, including some heavy-duty trash talking from his competitors, the five-time champion never flinched, keeping his focus clear and his emotions in check.

Yet in spite of all of these similarities, resulting in yet again another championship for an historic fifth time in a row, this 2010 Chase and Johnson’s participation in it has somehow also been very different.

Perhaps the biggest difference is that, unlike other years where Johnson literally ran away with the season leading up to the Chase and the Chase itself, he and his team actually struggled. No one knew that or acknowledged it any better than Chad Knaus, who had the best view of the struggles from atop the pit box.

“This year, we didn’t have the product that we had in previous years in terms of race cars,” Knaus admitted. “So we had to find other ways to win.”

Johnson admitted similar feelings, particularly when it came to the speed of his race cars. He did, however, note one important and somewhat new mitigating factor, that of the blood, sweat, and tears that he and his entire team had to put into the season to accomplish the same results as in the past.

“I think this year we showed what this team is made of,” Johnson said. “We may not have had the most speed, but we had the most heart.”

In addition to the most heart, Johnson and especially his crew chief also had an incredible measure of courage and some would say cojones. This was most evident when, in the middle of a race when Johnson’s crew was not performing well, Knaus replaced them quickly with Jeff Gordon’s crew, who became available after the much-heralded wreck between him and Jeff Burton that took Gordon out of the race.

Given these struggles, Johnson, Knaus and company found themselves in another different and unusual place, that of not being on the top of the points defending their championship during the final race of the season. Instead, the No. 48 driver and team were in all-out, having to win the race mode in order to secure their next place in the sport’s history.

The prime example of this is the fact that Knaus, who had had at least a draft of his speech ready going into Homestead in prior years, admitted that he was completely unprepared and still tweaking his banquet speech.

“In the past, I’ve had about a week or so to start thinking about my speech,” Knaus said. “This time it was like Lap 267 in Miami.”

Probably the biggest difference this year for Johnson as he accepts yet another shiny Sprint Cup trophy, is that he now has not only his wife Chandra but also baby girl Genevieve with whom to share it all. In fact, a common sight during this week’s Championship festivities in Las Vegas has been Johnson, lugging his baby’s car seat, if not cuddling with the princess herself, all over town.

“I am trying to be much more responsible since I have the baby,” Johnson said. “It means a lot to me to have her here and it’s a great experience to share it with my family. She will never remember it but we will have photos.”

All of these things combined, especially the new baby, have led Johnson to a most different championship year, in spite of the same old result. Yet one thing will remain the same, at least from Chad Knaus’ perspective, and that is the need to get back to it quickly in preparation for the 2011 season.

“Here’s the facts. We have started preparing at Hendrick Motorsports for next year,” Knaus said. “We are full force to make sure that we take a better product to the race track next year and it’s going to be so. We are hard at it.”

Johnson will be hard at it himself as well. After enjoying his first Christmas with his new baby girl, he will shortly be back on the track, from testing for the upcoming Daytona 500 to racing in the 2011 Rolex 24.

“Really, I just want to be home and enjoy what we’ve accomplished,” Johnson said. “It’s going to go by quick.”

SM Staff
Previous articleChildress Named 2010 Owner of the Year by the Sporting News
Next articleJimmie Johnson: The Real Deal Behind the 2010 Sprint Cup Champion