The Story of Ron Malec, Car Chief for Championship Team No. 48 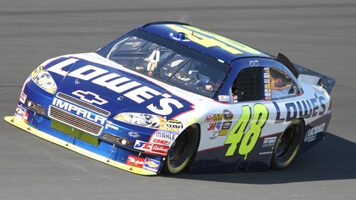 When it comes down to a championship team, most people focus on the driver. Then there are some who focus on the crew chief and car owner, yet how many care to look at the car chief? The two met before Johnson even headed to NASCAR on Johnson’s off-road racing days on the SCORE circuit. Malec had a background in racing as grew up racing go-karts (including two championships), sportsman cars and late models in the Midwest.

Their friendship grew through sharing an apartment in Pewaukee, Wis. and Malec began working on Johnson’s American Speed Association (ASA) cars in 1998.

“Getting my first job on that ASA team with Jimmie in 1998 and being able to work on a professional race team,” Malec told HendrickMotorsports.com in speaking of his favorite racing memory. “It’s such a big accomplishment in my life because I really didn’t have a set path prior to that. Then I kind of set my path and started my career in professional motorsports.”

They grew close during those days, teasing each other for their simple tastes in food. When money was tight and they went to Sam’s Club to stock up on food, Johnson would buy Hamburger Helper in bulk while Malec would purchase a five-gallon bucket of white rice, plus salt and Frosted Flakes.

When it came time for Johnson to make the jump to Hendrick Motorsports, Malec would go join him, becoming the team’s rear-tire carrier.

These days, Malec joins Chad Knaus a top the pit box, helping in running the team.

The role of the car chief involves a lot of week as it’s the car chief’s responsibility to make sure the car is ready for the weekend.

“There is a lot of preparation that goes on with the car before you get to the track,” Malec told ESPN. “On Tuesday and Wednesday, you’re loading up the truck and on Friday, it’s the longest day of the weekend. You go through technical inspection. That’s the most work that goes on. During the race, I’m more of a middle man. More hands on work during the week.”

The role of the car chief basically boils down to making “sure that the car is prepared well and that it’s right mechanically. That it’s set up well. Nothing comes loose or breaks. That’s my concern pretty much the entire weekend.”

During the race, Malec is a busy guy, communicating with the entire team.

“I’m in communication with the crew chief and the pit crew,” Malec said. “I choreograph what Chad wants to do during the race and I coordinate with the pit coach and the guys who go over the wall.”

One of the key aspects of Malec’s job is to make sure the adjustments crew chief Chad Knaus and Johnson request get done.

Sometimes, at times, Malec also has a big role in the adjustments made.

“Chad makes most of the suggestions during the race,” he said. “If we need to make an adjustment on the race car and it will affect something mechanically, I’ll say something to Jimmie. I will give some advice if he asks me for it. I try to leave that up to Greg, the engineer. If it doesn’t affect the car mechanically, I don’t get involved.”

Malec has been a car chief for seven years and says his favourite aspect of racing is the competition.

“I think it’s the competition level,” Malec said. “It’s the drive to win every week. Obviously, to maintain the level we’re at right now is a lot of effort. I love the challenge to maintain the top of where we are. It’s a level of competitiveness that’s hard to reach. It’s what we have to do and expected of us, working at Hendricks.”

There was talk that he may move up into the role of a crew chief, though Malec says he’s currently happy where he is at, making history with the 48 team.

Another part of it is the idea of working on cars as when he’s not at the track, he’s restoring old cars in his garage.

“That’s pretty much my hobby,” he told NASCAR Online. “It takes my mind off things. It gives me something else to focus on, to take away the stress of the job. I guess most people would say it’s not stress-free, but I guess I like pushing myself in life — and that’s how I stay driven on everything else. I drive myself to get this car project done at home, and it just keeps your drive going so you never slow down.”

Before he got involved in racing, his first job was working at a golf course, parking golf carts and washing them.

Johnson says that since then, they’ve both grown a lot.

“Ron and I, a friend of ours put us together,” Johnson said while looking back. “We kind of knew each other from the racetrack, all the racing I was doing. But a friend put us together and thought we would be roommates essentially, because I needed somewhere to live, felt like he could be a big asset to our race team. He was right.

“We’ve come a long way. I mean, from my first time driving an ASA stock car to where we are today, we’ve been through a ton together. I deeply miss Howie and everything he taught me about stock cars and kind of being a man. Ron and I were pretty young guys trying to figure out life. Howie had a great way to keep us in check, keep us in line, did a lot for me on and off the racetrack.”