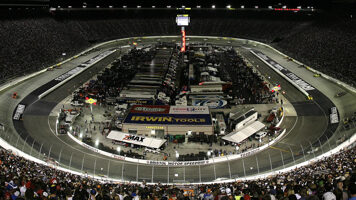 Well the season has officially ended. The NASCAR Champions banquet has been held and the dishes are done, the smoke has cleared and yes Jimmie really did win it for the 5th time, even if you did have to stay up half the night to see the presentation of the cup. The crew chiefs have all gone back to work making bigger, badder and meaner race cars. The pit crews are in off season strengthening mode. The marketing people are looking for new twists and new angles. The big chiefs are looking for more innovative sponsorship arrangements. And drivers are working out with their children and families. Some are challenging for a new trophy in Fantasy Football. Some are meeting the challenges of new fatherhood. [/media-credit]But for the fan’s the off season is more of a challenge. For instance, Santa Rick Hendrick gave three of his drivers’ fan contingencies their Christmas gifts early, presumably so he could get back to his normal business routine of playing Santa to his Grandchildren and taking care of business for his employees across the country. Though the act was well meaning, it added to the long, long off season wait for the return to racing. You could almost see him checking off his list. There was a new crew chief for Jeff and Mark and Junior, A new building for Jr. Nation, A new paint job for Jeff’s and Mark’s fans, and a new look and feel for the 5 time champ. That should about do it you could almost hear him chuckle. But oh the horror of the wait Santa H, we have the new toys but can not play with them until February.

In order to assist his fans in their withdrawal modes, Kevin Harvick made available a few items featuring the new Budweiser 29 Chevrolet. Just in time for your Christmas shopping pleasure and to avoid the need for hospitalization for your favorite NASCAR fan.

Jeff Gordon saw the need as critical for his fan base and unveiled the new Drive to End Hunger Chevrolet on every major morning TV show. The car, a sharp new Candy Apple Red and Silver Metallic, oozed speed even while it sat still. But one could almost hear the yells at the female anchors who so obviously had no idea what front down force meant and had been schooled about the importance of the Daytona 500 but were obviously not sure when that was.

NASCAR is trying hard to do their part with updates on the Hall of Fame Inductee’s and Christmas packages at the NASCAR Superstore. The fan council has new TV survey’s to complete and the media has story lines from 2010 to rank. There are the rumors of mid season changes to the COT’s fuel delivery system. The new nose has been unveiled. The determination of Sprint Cup driver participation in the Nationwide Series has yet to be released. And of course there is the new fuel to debate and learn the fine points of.

But still the fan’s grow restless it’s been 3 weeks since the engines fired. There are cars on GM’s test track in Arizona but we can’t see them, hear them or smell them. Brad Keselowski is in Columbus Ohio to help Nationwide celebrate its champion festival, but we aren’t there. Even Jeff Gluck and Joe Menzer are relatively quiet. The minds of NASCAR fans are searching for a way to fill the void. The chat rooms and message boards are running qualifying lap speeds and still the matrixing has begun.

Stories are pouring in of new ways that NASCAR fans have found to ease the discomfort of withdrawals from the sport. The rearranging of rooms of memorabilia, holiday pies shaped like the 5 Sprint Cups all bearing the 48 in whipped cream. The holiday Coconut cake that was Amp Green with red 88’s, (they are Christmas colors after all) the Christmas trees that are decorated all in NASCAR and team ornaments, including the one that is all car parts and sheet metal wreaths.

Which brings us to the David Letterman standard; the top 10 ways you know if you or someone you love is a NASCAR fan in withdraw. *insert drum roll here please*

10. You go through the chip display to find a bag of Bugles with the 33 Chevrolet on it instead of the new holiday bags.

9. You get volunteered to take the boys of the family Christmas shopping and you say to your young male shopping companions as you enter the mall, “Boogity, Boogity, Boogity Let’s go shopping boys.”

8. At a holiday party alternative fuel sources come up in the discussion and you start your opinion with, “Sunoco’s E 15 fuel, partners American Farmers with Speed for the good of the planet and the sport….”

7. You see an Intimidator Monte Carlo complete with Taz in the parking lot of the grocery store and you stand in awe with tears in your eyes and Whisper ‘It’s a beautiful thing’.

6. You and your best friend race the motorized carts at Wal-Mart in the Wally World 250 and use your cell phones for in cart cameras.

5. You nominate the HMS Paint and Body Department for best Artistic presentation at your Alumni Christmas party.

4. Your date is describing a play from the football game and he says, “He got loose and headed down the field …” And you say “maybe they need to go a round up on his track bar.”

3. You are waiting in the waiting room at the doctor’s office addressing envelopes and another patient says, Christmas Cards? You shake your head in disbelief and say ‘Daytona 500 party’.

2.  You are watching a NASCAR race on TV and are very animated when your house mate reminds you this race was run in 1999. You calmly look at them and say “So what’s your point man on any given day anyone can win.”

And the number one reason you know you are a NASCAR fan in withdraw.

1. You pull up to a stop light and look to your left and see a Toyota Camry and say to your best friend. I can take it. Watch. Your best friend reminds you that this is a Malibu and you say yeah but I got my Malibu from Rick Hendrick and you both give thumbs up.

If any of these sounds like your favorite NASCAR fan or even yourself, please don’t panic. Remain calm and remember that the Daytona 500 is in 75 days. The first official test of the season at Daytona on new pavement is December 15th and 16th. So it’s not long and it’s not far. Please be considerate of the safety of others and try to remember, ‘Have at it Boys’ does not carry over to Target at Christmas time.

Happy Holidays to all!

*Legal Disclaimer, any resemblance to any party, including the writer of this piece, is purely your imagination. Photo documentation and at least 3 statements of confirmation from at least 3 series champions will be required to verify these acts as factual. No animals, small children, or elderly individuals were injured during the performance of any of the above acts.

Happy Holidays to all the competitors in all the series thanks for giving us everything you had to give every single week, you are our heroes. Most importantly, thanks to all the families who shared their loved ones with us so we could cheer our favorite driver and favorite teams. You are the true heroes of the sport and we are forever in your debt.