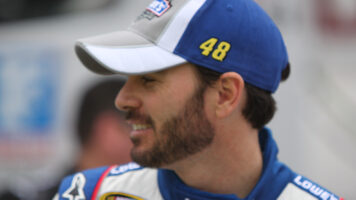 Last week NASCAR spent the better part of four days celebrating their 2010 season in the city that never sleeps: Las Vegas. From Sprint Cup victory style burnouts on the Las Vegas Strip to the pomp and circumstance of crowning a five time champion it was a very busy week for the elite in NASCAR. With those thoughts in mind, let’s begin with: [/media-credit]Even the harshest critics of sports dynasties has to concede to a HOORAH for Jimmie Johnson, crew chief Chad Knaus, team owner Rick Hendrick and the entire #48 Lowes team. Winning just one NASCAR Sprint Cup championship these days is difficult enough. Winning five of them in a row is just simply amazing.

That’s leads to a WAZZUP with the frequent comments that says Johnson’s five consecutive titles is a major negative for the sport of NASCAR racing? The New York Yankees’ string of championships didn’t damage Major League Baseball. The same can be said for basketball’s Boston Celtics and their consecutive titles.

Fellow driver, and Chase contender, Tony Stewart made a poignant point in his speech, during Friday night’s awards banquet, when he said “they’re the best again, and it’s up for us to figure how to get back on top of the mountain. They’re making history and that ought to be embraced. It’s not bad for our sport, it’s historic. We may never see this kind of dominance again.” Those comments were a very classy thing to say and Stewart deserves a HOORAH.

In one of his more unusual accolades, HOORAH to Jimmie Johnson for being named as the most viewed and acknowledged NASCAR personality of the 2010 season. Yes, there is a professional agency who actually monitors and times these appearances. That would be Joyce Julius and Associates Inc who has been carefully monitoring every NASCAR telecast for the past 25 years.

During the course of the NASCAR Sprint Cup’s live telecasts of their 36 races, including network replays, Johnson was mentioned a series high 7,875 times. He was also featured in a series’ high 88 interview segments with his television face time totaling to 1 hour, 31 minutes and 35 seconds.

As in the case of the final Chase standings, Denny Hamlin finished second in the Joyce Julius annual survey. Hamlin’s television stats for 2010 included 6,072 mentions along with 56 interviews totaling 1 hour, 1 minute and 50 seconds.

Seriously, this company really performs this service and apparently their business is very lucrative.

WAZZUP with champion crew chief Chad Knaus not taking any time off to enjoy the rewards of his hard work? Often described as a workaholic, Knaus left Las Vegas on Sunday and by Monday was with his Lowes #48 team for two days of testing at what was termed “an undisclosed race track.”

HOORAH for his driver Jimmie Johnson who did opt to take some time off for some well deserved quality family time at home. Hendrick Motorsports test driver Josh Wise filled in for Johnson during the two day team test.

HOORAH for the “Family Feud” game show take off during last week’s Chaser’s For Charity Fan fest held at the Las Vegas Motor Speedway. The drivers from the 2010 Chase were divided into two-six man teams to play the game under the supervision of Kevin Burke who did a magnificent job.

Burke walked over to Kyle Busch and congratulated him on his upcoming wedding day set for New Year’s Eve. Then he asked Busch to repeat the following lines: “I’m sorry, I didn’t mean it, it won’t happen again.” After repeating the lines, Burke told Busch “congratulations you’re now ready for being a husband and Brad Keselowski owes me fifty bucks for getting you to apologize.”

HOORAH for the NASCAR Victory Lap that featured all 12 cars from he 2010 Chase making a run down the famed Las Vegas Strip. The capacity crowd lined up on the sidewalks loved it especially when some of the drivers performed a victory burn out exhibition.

But WAZZUP with the engine of Jeff Gordon’s Chevrolet stalling during this run? He had to be pushed by Clint Bowyer. Riding inside of Bowyer’s two seat exhibition car was SPEED Channel analyst Kenny Wallace who yelled “spin him out while we’ve got the chance.”

Sadly, I have no choice but to issue a WAZZUP to Friday night’s NASCAR Sprint Cup awards show. The television broadcast, aired by the SPEED Channel, ran four hours at a rather tedious pace.

Another WAZZUP goes to comedian/impressionist Frank Caliendo who hosted the show. The well known Las Vegas headliner’s jokes just seemed to fall short with many of them only getting polite response from the racing audience. Caliendo was also featured in some of the special video presentations which only seemed to make the evening even longer.

Along those patriotic lines a HOORAH goes out to the Sprint Cup drivers who made it a point to thank the members of America’s Armed Forces during their speeches. There is simply not enough ways to show appreciation for the sacrifices these men and women make especially in light of the fact that many of them will not be home with their families during the holidays.

Now some HOORAHS for this week’s NASCAR notable quotable comments. The first goes to driver Greg Biffle who, during his speech, congratulated Jimmie Johnson on the recent birth of his first child and then said “you even beat me at that, you must be really fast.”

Another fashioned themed HOORAH goes to SPEED Channel personality Steve Byrnes who, commenting on the tuxedo he was wearing, said “this is the only piece of clothing I have that doesn’t have a SPEED logo on it. It’s a Vera Wang, whatever that is.”

Even the Wallace brothers got in on the red carpet fashion talk. SPEED Channel analyst Kenny Wallace asked his brother the obligatory pre awards show question “who are you wearing?” Without hesitation, Rusty Wallace replied “Leonardo Da Vinci.”

The final HOORAH of the week goes to Dale Earnhardt Jr for winning the NASCAR Most Popular Driver award for the eighth year in a row. At the end of the 2010 season the beleaguered driver said he needed to work on his confidence levels to eradicate his team’s sub par performances over the past two racing seasons. An overwhelming vote of confidence from the fans will certainly help that process along.

The final WAZZUP of the week goes to NBC Sports for their recent “Most Hated Athletes of 2010” poll. Do we even need something like this?

NASCAR’s bad boy Kyle Busch finished tenth in the final ranking one position ahead of Michael Vick. Wait a minute. There are American sports fans who hate Kyle Busch more than a NFL quarterback who went to prison for his involvement in a dog fighting ring? Really?

Amazingly, Jimmie Johnson finished 19th on the most hated poll. Apparently that’s the price you pay for making NASCAR history by winning their championship five years in a row.

In case you’re wondering, top honors from the poll went to basketball’s LeBron James for having the audacity to leave the NBA’s Cleveland team for an offer from Miami that was too good to refuse. Apparently the Cleveland fans voted ten times each.