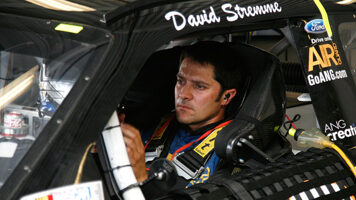 “I’ve got my own shop — right next door to Rusty Wallace Racing — and we’ve got enough room to run a good Nationwide team there,” Stremme said. “I purchased some Nationwide cars and have all the equipment I need to run them, but it’s all about the funding. I might own some of the operation, or maybe someone else will own part of it.” [/media-credit]Stremme said he has already made a substantial investment in the operation, purchasing cars from “a very good Sprint Cup team. We’re changing them all over to Nationwide specs, and we’re working hard to make sure we do everything right. I don’t want to just be out there, I want to be competitive. And to do that, we need a sponsor. I’m working hard on it, and we’ve got lots of things working, but nothing’s done yet.”

In six years of Sprint Cup Series competition with 119 starts, he has only three top 10s. Hense why for Stremme, despite his Cup experience, it would make sense to step down to the lower tier series.

Stremme has no experience with the new style car so that will present a possible problem with adjusting himself to the series. Though with many crew members who have experience being laid off, Stremme may be able to pick them up and use them to his advantage in the creation of this team.