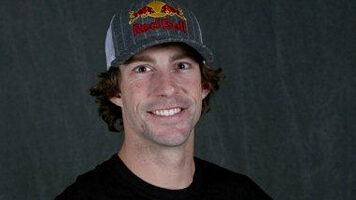 “It was absolutely awesome. I had a lot of fun,” said an energized Pastrana. [/media-credit]One thing was obvious in a teleconference with Pastrana on Tuesday afternoon. While he has high expectations, those high hopes are tempered with the reality of how tough a transition this will be.

He’s already received advice from some NASCAR regulars and seems to comprehend that his entry into the Nationwide Series will be an uphill battle.

Pastrana realizes that “It’s going to take a lot of time and effort.”  He went on to say, ”I have gotten to know a lot of guys through Red Bull like Brian Vickers and guys that have come from California like Rick Johnson and Jimmie Johnson.  They are all convinced that I am going to hit a lot of walls and it’s going to be a rough learning curve.  However, everyone is really behind me in trying to help out as much as they can. I am optimistic that I can do this and we are going to give it everything we got to give a legitimate effort.”

He’s no beginner when it comes to new challenges.  From Motocross to Rally Racing, Pastrana has proven that he’s not afraid to tackle new obstacles in his quest for competition.

“For me it’s all about waking up every morning with a passion.  I have always been one to switch maybe before I needed to or maybe before other people thought it was wise.  I think if you are passionate about something you can find a way to make it happen.  In my 27 years I have been able to chase a lot of different dreams and I feel like I have done as much as I can do in that sport or been as successful as I want to.  I need to wake up every morning thinking about nothing else other than what it’s going to take to get to the top of whatever sport I am in.  I think this is the biggest challenge that I have ever had and it’s going to take a lot of time, but I am willing to put the time in.”

Pastrana’s next test is scheduled for early January. The team hopes to get in even more testing before his first scheduled race at the Toyota All-Star Showdown in Irwindale, California on January 28th and 29th.

The remainder of his schedule is to be determined as sponsorship details are worked out but Pastrana-Waltrip Racing hopes to have an announcement next month.

For now, Pastrana is focused on driving and learning how to compete in NASCAR.

“NASCAR is the top form of racing maybe in the world – definitely in the United States. It’s the highest level of competition, everyone is so close and I think as a competitor there is no greater thrill then to put yourself against the best.”

“There will be a time, probably very shortly after the first race where everyone is going to say that I am not going to make it. But I really believe in myself and my team.”

But Travis Pastrana doesn’t walk away from a challenge; he walks towards it.

I think this is the biggest challenge that I have ever had and it’s going to take a lot of time, but I am willing to put the time in.”

Angela Campbell
A native of Charlotte, NC, Angela (Angie) was first introduced to racing by her father. An avid fan of NASCAR, she found a way to combine her love of racing with her passion for writing. Angie is also an award-winning member of the National Motorsports Press Association. Follow her on Twitter @angiecampbell_ for the latest NASCAR news and feature stories.
Previous articleHOORAHS AND WAZZUPS: Some Christmas goodies and some lumps of Coal
Next articleKasey Kahne: New Number, New Teammate, New Knees for the New Year