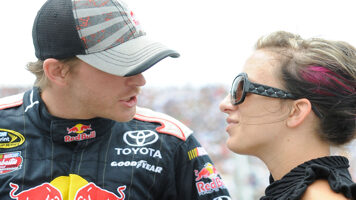 After being told he wouldn’t be driving for them at the end of November, Scott Speed is filing a $6.5 million lawsuit against Red Bull Racing for breaking terms in the contract.

After finishing 30th in points, Speed said he was notified by fax on November 24th that he wouldn’t be returning to the team in 2011.

“I’m obviously stupid disappointed that I didn’t even get a phone call, not a conversation, not anything from anyone from Austria,” Speed told Bob Pockrass Wednesday in a phone interview. “They all showed up at Miami. None of them spoke a word to me. I got a fax.”

He also added that he did have a contract for 2011, yet wouldn’t discuss the terms.

“I can’t describe how upset I am just over the morality of it,” Speed said. “I don’t understand how you can treat people like this. Whatever. I know that’s not how I treat people.”

Speed adds in the lawsuit that Red Bull picked up Speed’s option through 2013 in May 2010, but then broke that promise via firing him on November 23rd. The $6.5 million represents the salary that Speed would have received from 2011-2013.

The 2010 season was meant to be Speed’s breakout year and it started out that way, yet went down hill once teammate Brian Vickers got sick.

“When Brian got sick, we were both in the 20s in points just because of luck – honestly, we ran better than that,” Speed said. “We were going to put this driver in [for Vickers], and their old team was trying this [setup], so [we decided], ‘Let’s try this.’ … As a team, we kind of [crapped] the bed, really. There’s no question throughout the year we performed terribly.

“At the end of the day, I was a scapegoat for that, I guess.”

In August, when it was announced that Kasey Kahne would be joining the team in 2010, a lot of people had counted Speed out of Red Bull Racing with Vickers set to return come the following year. Speed said there were options laid on the table for him, however.

“They made it pretty clear with four or five races left that their plan was pretty simple – that if Brian doesn’t get better, then I’m their guy, but if Brian does get better, the options are open for maybe a third car, maybe Nationwide or something – that was the last I heard, was basically I’m waiting there to see if Brian is all right,” Speed said.

In the process of everything, Speed said he understood the decision, but doesn’t like how it was done.

“They had the opportunity to get Kasey Kahne, which is a no-brainer,” he said. “I would do the same thing. Then it’s ‘OK, do you want Scott Speed or Brian Vickers next year after that?’ Even though I think I’m probably performing at a similar level to Brian, I’d still take Brian over myself even because of his experience level.

“It makes sense what they’re doing. I just think they did it all wrong. They didn’t treat me fairly over the whole deal.”

Also with Kahne coming over, it was announced that some employees were being laid off as Kenny Francis, crew chief for Kahne, was bringing over his own bunce of guys. Speed said that his guys shoudn’t be blamed for the bad performance as that should be on the guys at the top of the chain.

“Changes that change the performance of the car are made at the top level,” Speed said. “When John Probst took over [general manager] Jay Frye’s sort of role running the team from a competition side, things changed and stuff got a lot better. … Then shortly after that, with everyone sort of fighting for their job, sort of a little bit working against each other, things got worse again.

“But the cars, during the middle part of the year, were terrible. They were terrible not because of the guys physically working on the cars. That’s not fair to say at all. That’s never the case. There’s three or four guys at the top that are deciding what bodies are going on what cars, what cars are going to run and that’s where the speed is at.”

He claims in the lawsuit that the real reason the team did not run well was due to the lack of funding in place.

This past month has not gone as well for Speed as a whole as he found out the same day that he was released that his mom had cancer.

“My mom was diagnosed with cancer on the same day [I was released], so it kind of puts life into a little bit more perspective than, ‘Oh my God, I just lost a racing ride,’” Speed said. “It’s terrible, but priorities change a little bit. In any case, it’s not just a case of finding a new ride or a new sponsor.

“I’ve never had a manager my whole career, for example. Red Bull has always told me where to go and what to do. There’s never been a need for a manager, especially somebody trying to find money and a ride. The decision I make for myself and where I go after Red Bull is a huge one. What brand do I associate myself after a seven-and-a-half year relationship with Red Bull? I have a global brand name with my career in Formula One and with what Red Bull has done with my stock-car racing career.”

Red Bull Racing was approached by SceneDaily for a comment, yet said they did not have anything to say.

Speed is not the first driver to be suing someone this offseason as Robby Gordon is suing Extenze after he feels he was wronged by them in terms of putting Kevin Conway in his car.