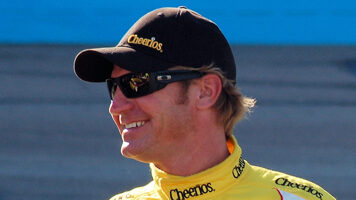 Clint Bowyer’s name doesn’t normally come to mind when thinking about whose going to be one to watch when racing at Daytona and Talladega. But according to team owner Richard Childress, it will one day.

“Clint Bowyer, he’ll go down in history as one of the greatest restrictor plate racers, just like Kevin [Harvick],” he said in late October. [/media-credit]Harvick won two of the four plate races in 2010. Often compared to the late Dale Earnhardt, easy to do since Harvick drives Earnhardt’s car, he’s become one of the top plate racers in the sport. With four wins at Daytona: two point paying and two Budweiser Shootout wins, plus a win at Talladega, he’s a dangerous superspeedway driver.

As Harvick grabbed the headlines, RCR teammate Bowyer quietly came into his own. In three of the four plates races Bowyer led laps: 19 in the season-opening Daytona 500, another 19 in the July race and then 37 at Talladega in the fall.

Bowyer could have easily swept all four plate races.

During the first red flag in the Daytona 500 for a pothole, Bowyer was the leader. With the race past the halfway point NASCAR could have made the decision to call the race official. Had they done so, Bowyer would have won his first Daytona 500.

Instead the race restarted but Bowyer’s No. 33 Chevrolet was still strong enough to contend for the win. Coming off turn two on the last lap he was running third behind a side-by-side Greg Biffle and Jamie McMurray, ready for a final charge to the finish line.

But when Dale Earnhardt Jr. then made it three wide, Bowyer lost the position and ended up finishing fourth. In restrictor plate race No. 2, at Talladega in April, Bowyer didn’t lead a lap but finished seventh. Two plate races and two top 10 finishes.

In the return trip to Daytona, Bowyer was in much better position for the win than he was in the Daytona 500. This time around he was leading with three laps to go before being passed by Jeff Gordon.

With help from teammate Harvick, Bowyer retook the lead a lap later and led the start/finish line when the caution came out, setting up a green-white-checkered finish.

On the restart Bowyer was swallowed up by Harvick, Gordon and others and ran fourth at the white flag. Going down the backstretch however, after losing two more positions, Bowyer was spun by David Reutimann.

Another restrictor plate finish he should have gotten was gone. There was one final plate race left in 2010 and it was finally going to be captured by the No. 33 Cheerios/Hamburger Helper team.

The dramatic finish seemed fitting; no one knew who had won except Bowyer tried to help sway NASCAR in his direction when he started celebrating before NASCAR officially ruled. He later joked, “Hell yeah. Claim that baby before somebody else does.

When NASCAR did rule it became official: Bowyer had finally gotten the best of Harvick. They finished one-two for RCR as Bowyer got his second win of the 2010 season.

The win was further proof that Bowyer is one of the best plate racers in NASCAR today, right there with Harvick and even McMurray, whom get most of the praise and picks on Sunday’s.

When the 2011 season begins back in Daytona in February, it could be the quiet Bowyer who winds up in victory lane sometime during Speedweeks.

Should he, it would help Earnhardt-Childress Racing pick up right where they left off in 2010 at restrictor plate tracks.

The partnership formed in 2007 between Teresa Earnhardt and Richard Childress, when the two decided to pull together their restrictor plate programs. They now produce the engines for all three RCR cars and the two Earnhardt-Ganassi Racing entries.

This past season an ECR engine was in victory lane at all four plate tracks. McMurray started it off in the Daytona 500 and said, “The ECR engines have always been known for really good restrictor plate engines.”

The summer classic in Daytona saw domination from the RCR cars. At a time the three were all lined up in the top five and had it not been for Bowyer’s last lap spin, they might have well finished there.

“To have all three RCR cars up there leading the race, racing each other, it was really cool to watch.”

The spring Talladega race further proved that ECR engines were ones to be dealt with. Behind Harvick’s win came McMurray in second with teammate Juan Pablo Montoya in third, all driving ECR engines.

The same happened again in the fall Talladega race this time with Bowyer ahead of Harvick and Montoya. Another ECR top three sweep.

“There was one time in the race I was like ‘Hey, get Junior out of there,’ “ Bowyer said after his win.

“Maybe we can Photo Shop him out of there. It would be a pretty good picture.”

The picture for the 2011 seasons four restrictor plate tracks won’t be clear until the checkered flags fall on those events. Racing at superspeedways is too unpredictable, but if some bit of history repeats itself expect Bowyer to be a major player.

However, the same could be said for anyone driving an ECR engine.

With two of the biggest names in NASCAR, Earnhardt and Childress, building engines that get better and better every week, it’s only natural that the two companies that have long been the restrictor plate masters have taken their place at the head of the field.