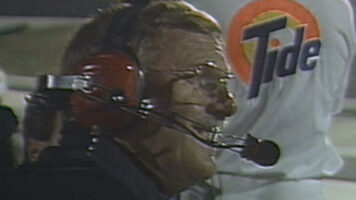 J. C. Elder only had a third grade education. He never learned to read and write but he was a natural born genius when it came to working on cars.

Elder was a man of few words but he knew exactly what he wanted in a race car. If someone disagreed or questioned his decisions, more often than not, he would just pick up and leave. He soon became known throughout the racing community simply as “Suitcase.”

Despite his cantankerous disposition, Elder was one of the most popular men in the garage. Some said he could just watch a car take a lap around the track and know what was wrong with it. People will put up with a lot for that kind of brilliance.

“I have a problem getting people to understand how I want things done,” he once said. “Usually, I can get it done myself quicker than I can explain to them how I want it done.”

Jake Elder began his NASCAR career as a fabricator for Richard Petty Enterprises around 1960.

Jake came to work for us in Level Cross in the ‘60s, down from the Hickory area, and he was a fabricator,” Richard Petty said. “Jake was old school. There was no engineering; it was all off the cuff. He’d put something on the car and say, ‘OK, now it’s right. Here, you go drive it. And don’t come back in complaining to me, because I got the car fixed. You go learn how to drive it.'”

He later went on to partner with the Holman-Moody Ford factory team. While there, Elder worked with Mario Andretti and led him to a 1967 victory of the Daytona 500.

Elder also crew chiefed for David Pearson. Together they won 27 races and two championships in 1968 and 1969.

He later helped Dale Earnhardt get his first Cup victory in 1979 at Bristol Motor Speedway. Earnhardt went on to win Rookie of the Year that season. Suitcase started out the 1980 season with Earnhardt but quit before the season was over. Even so, part of the credit for Earnhardt’s first Cup championship rightly belongs to Elder.

His brief partnership with Earnhardt also produced one of the most colorful quotes in NASCAR history. After Earnhardt’s first win, Elder told the rookie, “Stick with me kid and we’ll have diamonds as big as horse turds.”

Ironically it was Elder who left Earnhardt.

During the 1970s and 1980s, he probably worked with almost every driver on the track, moving on whenever his mood or circumstances called for a change.

Elder worked with Darrell Waltrip many times over the years and was with Waltrip for his first and last Cup victories.

“He was my crew chief about 10 different times,” Waltrip said. “I fired him a lot, and he’d go on and work with Dale, or somebody else, and then he’d be back with me.

“He helped me, he helped Dale Earnhardt, he helped Terry Labonte — every young driver that came along, Jake made winners out of them because he gave you a car and taught you what a car is supposed to feel like.”

Jack Roush entered the Cup series as an owner in 1988 and describes Elder as having an almost supernatural ability to diagnose problems.

“If you had a demon, if your team was beset by bad luck, he would bring his little bag of templates and stuff to check out a car with,” says Roush. “And he would go in and the guys would get out of his way, and he would make his adjustments, and when he was done, if there was a demon in there, he’d have it chased off.

In the 1990s, more and more teams began using engineers and specialists. Jake Elder and his kind were becoming obsolete.

But at one time, Jake Elder was the man to call whenever someone had a problem that needed fixing.

“Jake was into precision before we knew what precision was. Think about the people he worked with: Fireball Roberts, Dale Earnhardt, and David Pearson. He had a huge influence. A lot of the time, if people needed their car fixed, they called Jake Elder.  He wasn’t a people person and he was as rough as a corn cob, but if you got to know him, there wasn’t a better guy to know in that garage area. There is not another Jake Elder. That is one thing we do not have anymore.”

Winston Kelley, the executive director of the NASCAR Hall of fame, called Elder “one of the true pioneers and classic personalities of our sport.”

“One of my most vivid memories of Jake is asking him what happened to one of his meticulously prepared cars and Jake putting it so succinctly and simply in saying, ‘It blowed up.'”

In 2006 “Suitcase Jake” Elder suffered a stroke and his health slowly began to deteriorate. He battled dementia and ended up in an assisted living facility in Statesville, North Carolina. On February 24, 2010, Jake Elder passed away.

Some called him a miracle worker. Others said he had a magic touch. One thing is certain. Suitcase Jake Elder was one of a kind and his influence on NASCAR should never be forgotten.

Angela Campbell
A native of Charlotte, NC, Angela (Angie) was first introduced to racing by her father. An avid fan of NASCAR, she found a way to combine her love of racing with her passion for writing. Angie is also an award-winning member of the National Motorsports Press Association. Follow her on Twitter @angiecampbell_ for the latest NASCAR news and feature stories.
Previous articleNOTES FROM THE NASCAR NATION: CARL EDWARDS-THESPIAN?
Next articleAllmendinger ready to go back racing