Danica Patrick’s Success or Lack Thereof is a Tough Decision, There are No In-Betweens 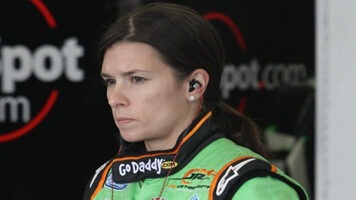 When it was first announced that IZOD IndyCar Series driver Danica Patrick would be officially making her debut in the NASCAR Nationwide Series for the 2010 season, the internet exploded with blogs pertaining to what type of impact she would have on the sport. [/media-credit]There were many unanswered questions because of her lack of experience behind the wheel of the heavier stock car and the fans began to take sides once they realized she was serious about her attempt to compete in a series, which is nowhere near the type of cars she grew up racing in.

With most of the talk being centered on her IndyCar results which were less than stellar at best, many still believed she is what NASCAR needed during a time when attendance was at an all-time low.

Before long, the first of many unsupportive jabs were thrown, when Kyle Petty kicked it off with this rant.

“She’s not Dario Franchitti and she’s not Tony Stewart.  She’s not really shown over there [in the Indy Racing League] and won races and done stuff over there numbers-wise,” said Petty during the Sight and Sound which marked the unofficial start of the 2010 NASCAR racing season.

Petty also added, “She’s just a marketing machine. Let’s look at the facts and be blunt about it. If she gets in that car and doesn’t win races, it’s not the car, it’s not the engines and it’s not the team.”

Petty finished with, “The only impact she’ll have on the sport is she wasted two or three years on a car that a good driver could have been in and could have been developing.”

Janet Guthrie, who was the first woman to reach the top level of open wheel racing and NASCAR in the 1970s, along with being a member of NASCAR’s appeal panel said, “She should stay where she is in the IndyCar Series.”

Guthrie also added, “She is in the best possible situation, and in the catbird seat with one of the few teams [Andretti Autosport] that is capable of winning.”

Earnhardt Ganassi driver Juan Montoya, who made his first start in 2006 coming from the open wheel ranks said, “Danica, I think she’s got the talent and everything but I don’t think she knows what she’s getting into.”

Montoya finished with, “They’re so different to drive, and it’s not the same feeling. I wouldn’t be doing both cars, to be honest with you, that’s my advice.”

The fact of the matter is, the only reason she has gotten this much publicity is because she is a high profile female trying to make it in one of the most popular motorsports today.

Not only is she a female, but because in the sex-sells society that we live in, her success that she has had in the IRL falls more on the heels of selling herself as a sex symbol than a race car driver.

You can’t blame her sponsor GoDaddy.com for coupling their marketing skills with the racy commercials to sell not only their product, but Patrick as well.

Parsons also added that, “This is not only big news for NASCAR fans; it has all the ingredients for some major GoDaddy-esque marketing magic.”

Parsons thrust Patrick into the limelight with his unique marketing strategy, while just about closing the door for any female to have a chance in the series unless they are willing to follow his technique with the focus pointed at teasing members of the opposite sex.

Each fan who chose to shared their opinion pertaining to the success that she could have in the series, and she will continue to be scrutinized until she can prove that her career is not based off her marketing power, and more on her driving abilities in NASCAR.

Skepticism ran rampant as the season progressed, and Patrick herself made it hard for the fans to gauge if indeed she had what it took to compete at this level, since her results reflected her lack of experience.

With each passing race, we heard the watered down versions of why she might become an overnight success, with most of them based on her one victory that came in the IZOD IndyCar Series.

Patrick ran a total of 13 races in 2010 without a top-five, or top-10 finish, and only finished one race on the lead lap.

With all the hype and expectations that followed her into the Nationwide series, she only lead four, and completed 2040 of the 2355 laps she ran during the year, which to most was a big accomplishment given the fact she only competed on a part-time basis.

Until Patrick makes a decision to drive full-time in the NNS, or continue her career in the IZOD IndyCar Series, she will continue to be put under a microscope of uncertainty concerning her driving abilities in NASCAR.

The consensus around the internet has gone both ways, as far as how much success she could possibly have if indeed she chose the NNS over her open wheel career, with no in-betweens.